ISLAMABAD, Pakistan: Two days before the Joint Investigation Team (JIT) is bound to submit its final report to the Supreme Court of Pakistan in Panama Papers Case, four Federal Ministers on Saturday raised serious reservations over the JIT, also saying they won’t accept the JIT report if statement of Qatari prince was not recorded.

While addressing a press conference at Press Information Department (PID) in Islamabad, four Federal Ministers including Minister for Planning Development and Reforms Ahsan Iqbal, Minister for Railways Khawaja Saad Rafique, Minister for Petroleum and Natural Resources Shahid Khaqan Abbasi and Minister for Water and Power Khawaja Asif expressed reservations on the conduct of the JIT.

It may be mentioned that money trail given by Sharif family is strongly linked with statement of former Prime Minister of Qatar while JIT has not record his statement.

The ministers also demanded that the audio/video recordings of investigation process undertaken by the JIT should be made public.

Saad Rafique said that formation, working and selection of the JIT members have remained controversial from the very first day.

“We are a biggest political party of Country and earned most of the votes,” he said.

The minister said that Prime Minister Nawaz Sharif had a stance not to raise questions on the JIT.

“We have reservations over the inclusion of MI (Military Intelligence) and ISI (Inter-Services Intelligence) members in JIT,” Saad Rafique said. “We feel that opponents used remarks of honorable judges against us without any reference.”

Shahid Khaqan Abbasi said that all the required record had been provided to the Supreme Court but, he added, questions and ambiguities have been raised about the JIT. 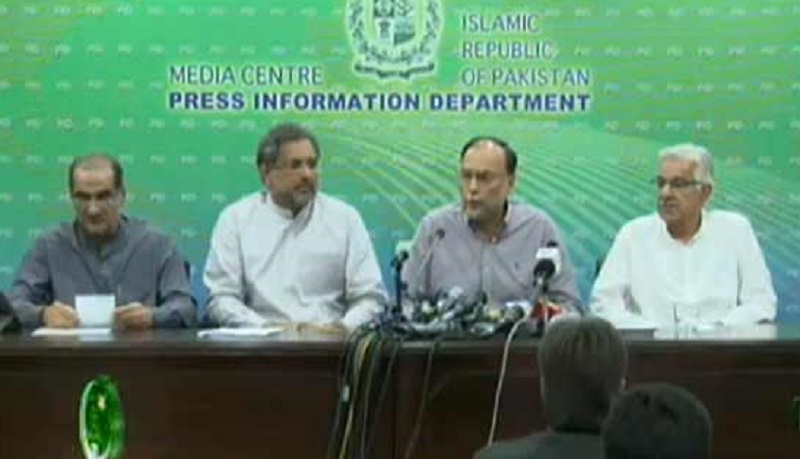 The minister said that not only the prime minister presented himself for accountability but his daughter Maryam Nawaz also appeared before the JIT despite reservations.

“The JIT must get authenticated letter of the former Qatri prime minister and make it part of the evidence before submitting its final report before the apex court. Teams were sent abroad to question Mark Sahgal and General Pervez Musharraf. Likewise, Arslan Iftikhar’s father was not summoned by Courts” commented Kh Asif.

Asif said that those who were defeated in 2013 elections are now trying to take advantage of Court’s involvement. He said that the court of masses is biggest court of the Country.

“People’s court chose Nawaz Sharif as the prime minister thrice,” he said adding that people should be told what questions were asked from Sharif family and what answers were given by them.

Mati
Mati-Ullah is the Online Editor For DND. He is the real man to handle the team around the Country and get news from them and provide to you instantly.
Share
Facebook
Twitter
Pinterest
WhatsApp
Previous articlePakistan is a peace and sports loving Country, COAS tells Int’l football players
Next articleMushahid Hussain Sayed elected Vice Chairman of top Asian Political Parties body