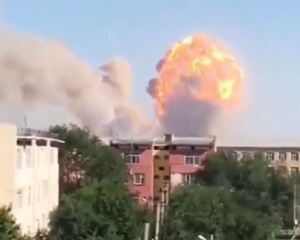 TARAZ, Kazakhstan: Four servicemen were killed and dozens injured in a series of explosions at a military facility in Kazakhstan’s southern Zhambyl Region, Eurasia Dairy reported.

While addressing a press briefing on Friday, the Kazakh Defense Minister Nurlan Yermekbayev said that four servicemen were killed while eliminating the consequences of the accident, and several people went missing.

Nurlan Yermekbayev noted that there are no civilians among the dead and injured.

The depot of the engineering and sapper brigade of the Kazakh Defense Ministry is located in the village of Kainar of the Bayzak District of the Zhambyl Region.

The Kazakh Defense Ministry said that residents of four nearby villages are being evacuated while patrols are being conducted in evacuated settlements to prevent the looting.

Meanwhile, railways and highways around the area have been blocked.

The Russian broadcaster RT reported earlier that the fire has resulted in at least six explosions, leaving 66 people injured, and 28 of them were still being treated in hospital.

There are no more explosions at the ammunition warehouse but the fire is still raging, the Kazakh defense ministry.