ISLAMABAD, Pakistan: To honor the valiant struggle of Kashmiris for their right to self-determination and to highlight the widespread human rights violations in Indian Illegally Occupied Jammu and Kashmir (IIOJK), an art exhibition was held at the Ministry of Foreign Affairs in Islamabad on Thursday as part of the Kashmir Solidarity Day activities.

Young artists from the National College of Arts Rawalpindi, COMSATS University Islamabad and Rawalpindi Women University participated in the exhibition. 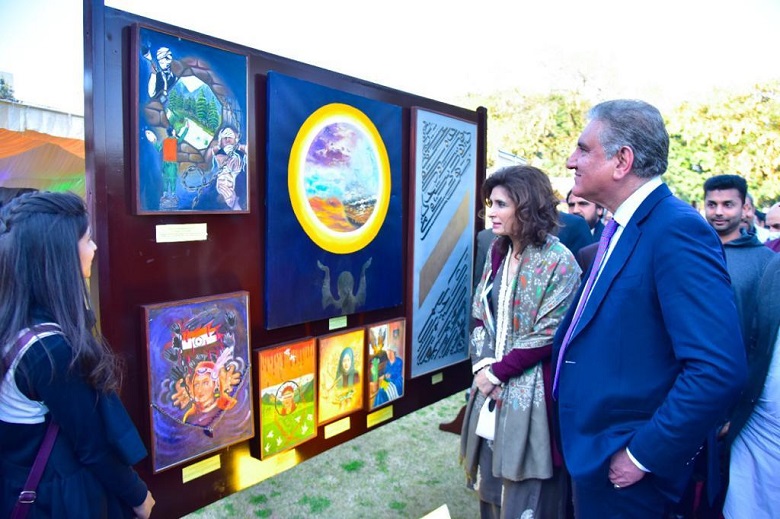 The Parliamentary Secretary for Foreign Affairs Andleeb Abbas, the Chairman Kashmir Committee of the Parliament Shehryar Afridi were guest speakers.

Members of the diplomatic corps, Kashmiris, former Ambassadors, civil society, academia and artists from various academic institutions also attended the event among others.

The Parliamentary Secretary for Foreign Affairs and Chairman Parliamentary Committee on Kashmir in their remarks underscored the important role of arts in highlighting the plight of Kashmiris in IIOJK and called on the international community to deliver on its promise to the Kashmiris for the attainment of their inalienable right to self-determination as was pledged by numerous UN Security Council resolutions.

In his keynote address, the foreign minister emphasized the importance of harnessing the potential of arts to provide insights into Kashmiris’ peaceful resistance movement.

The foreign minister said that despite the sealing of borders, denial of access to neutral observers, and propagating disinformation, Kashmiris could not be silenced or subdued by Indian occupation forces.

Shah Mahmood Qureshi said that the pattern of ongoing atrocities in IIOJK reflected the anti-peace and anti-Muslim ‘Hindutva’ agenda of extremist RSS-BJP dispensation. The continued Indian oppression has only strengthened the will of the Kashmiris to stand firm in their just struggle, he added.

Qureshi highlighted that when people started disseminating reality through arts and music, it made a huge difference and the process had already begun in IIOJK. He called upon the international community to peacefully resolve the Jammu and Kashmir dispute in accordance with international legitimacy.