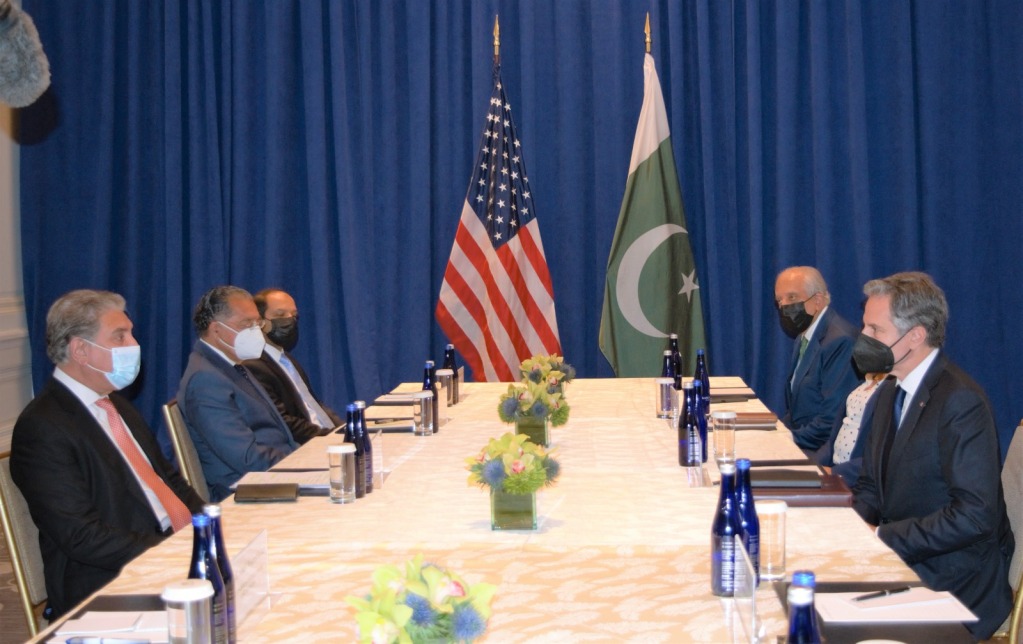 The Foreign Minister said that close engagement between Pakistan and the United States had always been mutually beneficial and a factor for stability in South Asia. He reiterated Pakistan’s desire for a balanced relationship with the United States that was anchored in trade, investment, energy and regional connectivity.

The Foreign Minister reiterated Pakistan’s commitment to facilitating efforts for an inclusive political settlement in Afghanistan. He stressed that only a stable and broad-based government in Afghanistan, which reflects its diversity and preserves the gains made by the country since 2001, would be able to ensure that Afghan territory is never exploited by transnational terrorist groups ever again.

Foreign Minister Qureshi noted that a new political reality had emerged in Afghanistan. While the Taliban should be held to their commitments, the international community has a moral obligation to help the Afghan people deal with the growing humanitarian crisis in Afghanistan. He hoped that the world would not repeat the mistake of disengaging with Afghanistan.

The Foreign Minister highlighted the grave human rights situation in Indian Illegally Occupied Jammu and Kashmir. He underscored the importance of resolving the Kashmir dispute for lasting peace and stability in South Asia.

Secretary Blinken appreciated Pakistan’s support for the evacuation of U.S citizens and other nationals from Afghanistan, and its continued efforts for peace in the region.

Official Text of meeting is hereunder:

SECRETARY BLINKEN: Good afternoon, everyone. I’m very pleased to be meeting with my friend and counterpart from Pakistan, Foreign Minister Qureshi. We’ve had many opportunities to speak on the phone these many months, but finally now an opportunity (inaudible) at the UN General Assembly to see each other in person. A lot to focus on, starting with Afghanistan and the importance of our countries working together and going forward on Afghanistan. (Inaudible) appreciate the work that Pakistan has done to facilitate the departure of American citizens who wish to leave as well as others, but a lot to talk about there as well as our own bilateral relationship, including the economic relationship between our countries and working in the region as a whole.

So it’s a pleasure to see you. Look forward to a very good conversation.

FOREIGN MINISTER QURESHI: Well, thank you, Secretary Blinken. Thank you for your time today. I’m glad to be meeting face-to-face with you. As you said, we’ve had three telephone phone conversations discussing the regional situation, the Afghan situation. I thought a time would come where we’d be talking beyond Afghanistan, but it seems Afghanistan is there, we can’t wish it away, and we have to find a way of collectively working to achieve our common objective, which is peace and stability. So it gives me a good opportunity to discuss the evolving situation in Afghanistan, to discuss our bilateral relations, and the delicate situation in South Asia. So I’m looking forward to my meeting with the Secretary.

SECRETARY BLINKEN: Thank you. Thank you all.