Food is the pathway to peace: WFP Chief

ROME: The UN World Food Programme (WFP) Executive Director David Beasley warned the wealthy, modern, technologically advanced world that famine is at humanity’s doorstep for millions and millions of people on earth and failure to prevent famine will destroy many lives.

These views were expressed by him in his speech in Nobel Peace Prize acceptance ceremony.

“I wish today that I could speak of how working together we could end world hunger for all the 690 million people who go to bed hungry every night. But, today we have a crisis at hand,” he cautioned.

He thanked for acknowledging WFP’s work of using food to combat hunger, prevent mass migration, to end the conflict and to create stability and peace.

“It is a call to action. Because of so many wars, climate change, the widespread use of hunger as a political and military weapon, and a global health pandemic that makes all of that exponentially worse, 270 million people are marching toward starvation,” he added.  Failure to address their needs will cause a hunger pandemic which will dwarf the impact of COVID, WFP chief maintained. 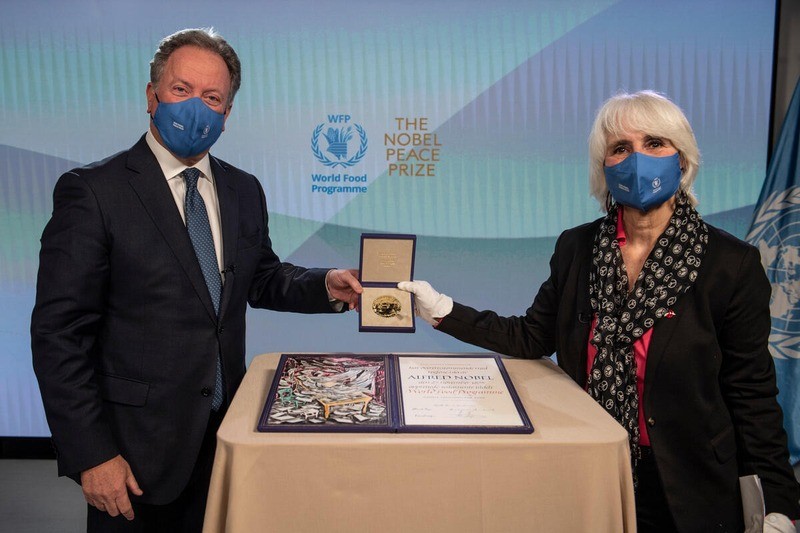 On the one hand after a century of massive strides in eliminating extreme poverty, today those 270 million of our neighbours are on the brink of starvation. That’s more than the entire population of Western Europe, David Beasley added.

David Beasley said that on the other hand, there is $400 trillion of wealth in our world today. Even at the height of the COVID pandemic, in just 90 days, an additional $2.7 trillion of wealth was created. And we only need $5 billion to save 30 million lives from famine. What am I missing here?

“Please don’t ask us to choose who lives and who dies.  In the spirit of Alfred Nobel, as inscribed on this medal, “peace and brotherhood” – let’s feed them all, as food is the pathway to peace,” he concluded.

Mati
Mati-Ullah is the Online Editor For DND. He is the real man to handle the team around the Country and get news from them and provide to you instantly.
Share
Facebook
Twitter
Pinterest
WhatsApp
Previous articlePakistan rejects Indian attempt to deny responsibility for global disinformation campaign against Pakistan
Next articlePTI to welcome PPP’s decision to quit Sindh Assembly: Khurrum Sher Zaman