ISLAMABAD, Pakistan: The Senate Foreign Affairs Committee met under the Chairman Senator Mushahid Hussain Sayed at the Parliament House in Islamabad on Thursday.

In the meeting, a detailed three-hour-long briefing was provided by the Foreign Minister Shah Mahmood Qureshi to the Committee on the situation in Indian Illegally Occupied Jammu and Kashmir (IIOJK) with reference to political prisoners, as well as Foreign Policy challenges for 2021.

At the conclusion of the meeting, the foreign minister presented the dossier on “Indian state sponsorship of terrorism and destabilization in Pakistan” to Senator Mushahid Hussain Sayed who directed the Foreign Office for the wide dissemination of the dossier internationally. 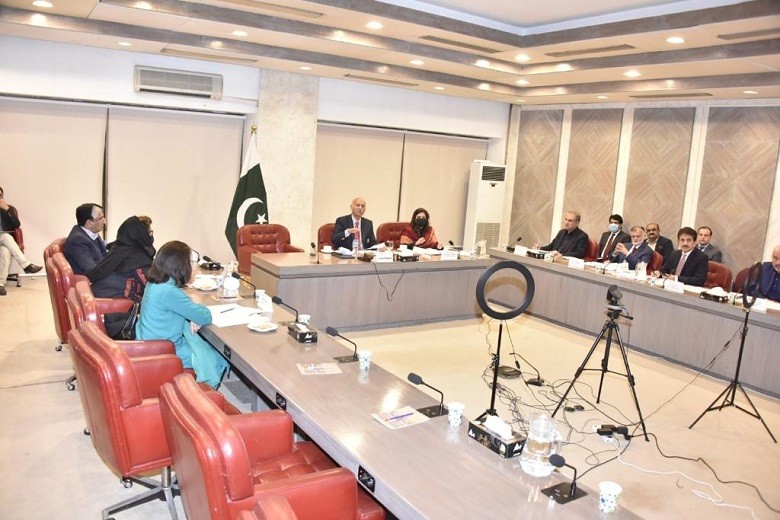 On the Special initiative of the Chairman, relatives of prominent political prisoners in IIOJK like Mushaal Malik, the wife of Yasin Malik together with her mother and daughter, as well as Dr. Mujahid Gillani, the nephew of Mohtarama Aasiya Andrabi plus prominent Kashmiri activist in the UK, Raja Najabat Hussain also attend the meeting on special invitation.

The Foreign Minister Shah Mahmood Qureshi informed the Committee that the OIC Foreign Ministers Conference will be held in Islamabad later this year, in which the primary focus would be the situation in IIOJK, and in this regard, the government will ensure that Human Rights and the issue of Kashmiri political prisoners would be in the forefront.

Qureshi also informed the Committee that an Economic Diplomacy Division has been established in Foreign Office which would focus on trade, commerce, and investment as key components of Pakistan Foreign Policy.

The foreign minister also briefed the Committee that China Pakistan Economic Corridor (CPEC) had now entered the second phase in which relocation of Chinese industry, job creation, and the activation of two new Joint Working Groups (JWGs) on Agriculture and international cooperation, respectively, will be a force-multiplier for building CPEC.

On the Coronavirus, pursuant to the telephonic talk between Foreign Ministers of Pakistan and China on January 20, China had agreed to gift 500,000 doses of vaccine plus another 1.1 million doses would be given very soon.

The foreign minister also briefed the Senate Foreign Affairs Committee on Pakistan Foreign Policy’s priorities with reference to relations with China, the Muslim world, engaging with the new Biden administration, Afghanistan, India, and the EU.

The Committee also lauded the January 26 Black Day protests in Indian occupied Kashmir as well as within India and expressed solidarity with the struggling Sikh farmers and added that “it is heartening to note that famous Pakistani songs have become popular anthems of resistance among the Indian people”.

The resolution also urged the Government that the RSS, which is the ideological mainstay of the Modi regime, should be ‘fully exposed and penalized’ at all international fora.

The Committee members thanked the foreign minister for his comprehensive and candid briefing and Senator Mushahid Hussain said that, as in the past, the Foreign Affairs Committee would continue to preserve, promote and protect Pakistan’s national interest with particular reference to Foreign Policy and national security and function above partisan politics and be a force-multipliers for Pakistan’s core interests.

Ms. Rabeea Anwar, Secretary of the Committee, was also present.