DHAKA, Bangladesh: A Flag Hoisting Ceremony was held at the High Commission for Pakistan in Dhaka on Wednesday morning to mark Pakistan Day.

Pakistan’s High Commissioner to Bangladesh Imran Ahmed Siddiqui hoisted the national flag at the Chancery to the tune of the national anthem.

On this day in 1940, the leaders of Pakistan Movement had passed a resolution in Lahore demanding a separate homeland for the Muslims of South Asia. 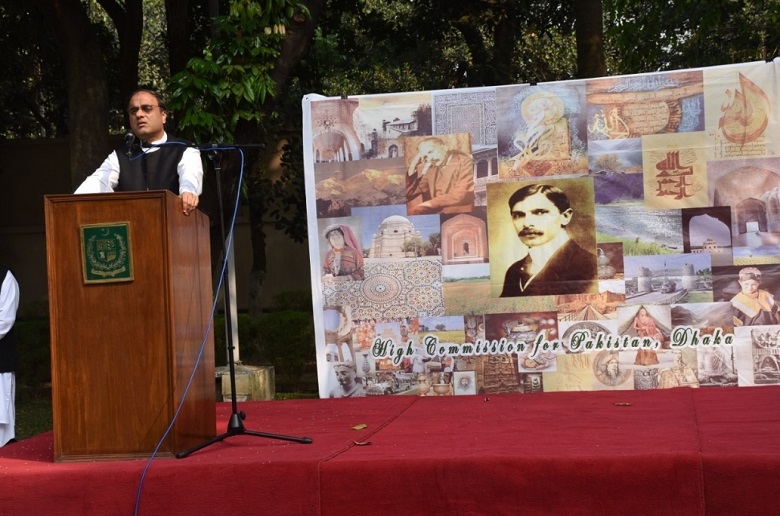 Messages of President Dr. Arif Alvi and Prime Minister Imran Khan were read out by the High Commissioner on the occasion.

In their messages, the President and Prime Minister of Pakistan have congratulated the nation and have paid tributes to the dynamic and visionary leadership of Quaid-e-Azam Muhammad Ali Jinnah, who valiantly led struggle for Pakistan.

They reaffirmed their pledge to making untiring efforts to realize the vision of the founding fathers to transform Pakistan into a truly democratic, moderate, progressive and welfare state on the model of Riyasat-e-Madina.

The High Commissioner felicitated the Pakistanis across the world particularly in Bangladesh on this auspicious occasion and emphasized the need for following the golden principles of “Faith, Unity and Discipline” as laid down by the Father of the Nation. Paying glowing tribute to historic struggle for Pakistan, the High commissioner said that 23rd March is a day of introspection and renewal of our resolve to serve Pakistan and make it a country as dreamt by Quaid-e-Azam Muhammad Ali Jinnah.

Special prayers were offered for the well-being of Pakistan, its people and the emancipation of Kashmiri people from a brutal foreign occupation.

A photographic exhibition of rare photographs of the leaders of Pakistan movement was also organized on the occasion.

The ceremony was attended by Pakistani community living in Bangladesh, local media persons and staff of the High Commission.