ISLAMABAD, Pakistan: The last five years witnessed a dramatic increase in the assets of nearly a dozen of federal ministers in the former Pakistan Tehreek-e-Insaf (PTI) government, revealed an investigation carried out by Samaa News.

In 2015, the total assets of PTI federal ministers were worth Rs 2.15 billion which increased to Rs 5.5 billion in 2020, thus increasing the value of their total assets by 150%.

Whose assets have increased so much?

According to the research of Samaa News, the assets of former Education Minister Shafqat Mahmood have increased by 308% during the last 5 years.

The position of former ministers

Samaa News has compared the details of the assets of these ministers submitted to the Election Commission between 2014 and 2020. All the ministers have confirmed the increase in assets to the head of SAMAA Investigation.

Some former ministers of the PTI era claim that their assets have not increased but the value of these assets has increased.

Three former federal ministers have confirmed that they have also received notices from the Election Commission of Pakistan (ECP) on asset matters. 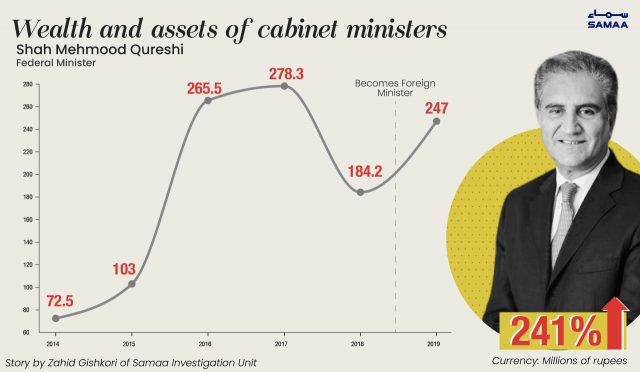 The former Foreign Minister and PTI Vice Chairman Shah Mahmood Qureshi and his wife’s total assets were Rs 72 million in 2014, which increased to Rs 247 million in 2020.

Qureshi attributed the increase in assets to his wife getting a share of the property from her father-in-law in 2015.

Shah Mahmood Qureshi says he has responded to the Election Commission’s objection to the assets. 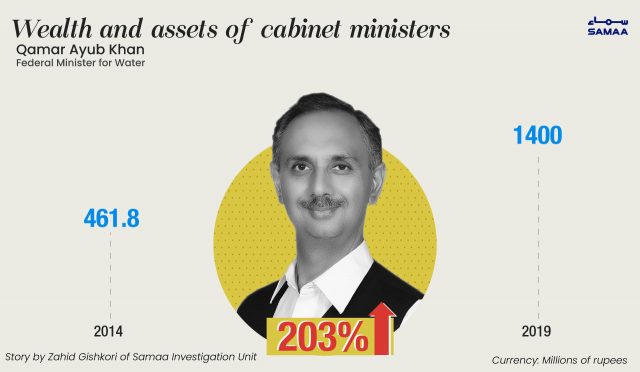 Omar Ayub Khan and his wife, who were in various ministries during the PTI regime, had total assets of Rs 46 crore in 2014 which increased to Rs 1.40 billion in 2020.

Omar Ayub Khan says that his assets have increased due to his share in business shares and business company.

The former federal minister says he has responded to the Election Commission’s objection to the assets. 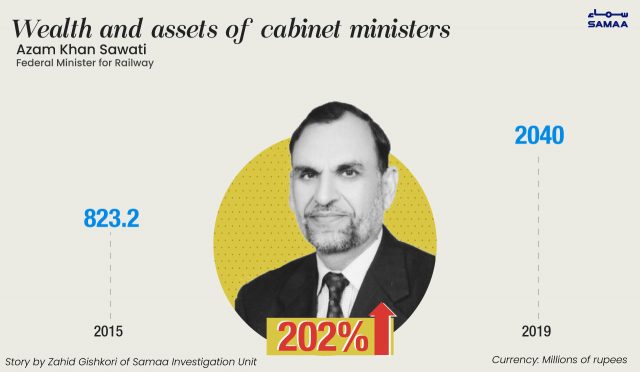 The former federal minister says that he has no business in Pakistan and the reason for the increase in assets is also the business abroad.

Azam Swati said that there was a misunderstanding in submitting details of assets, now it has been rectified. 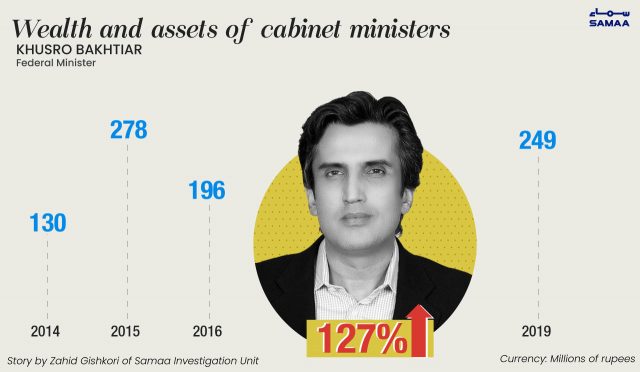 The former Federal Minister Khusro Bakhtiar and his wife had total assets of Rs 130 million in 2014 which increased to Rs 240 million in 2020.

Khusro Bakhtiar says his assets grew because of the expansion of agribusiness, land sales and savings. 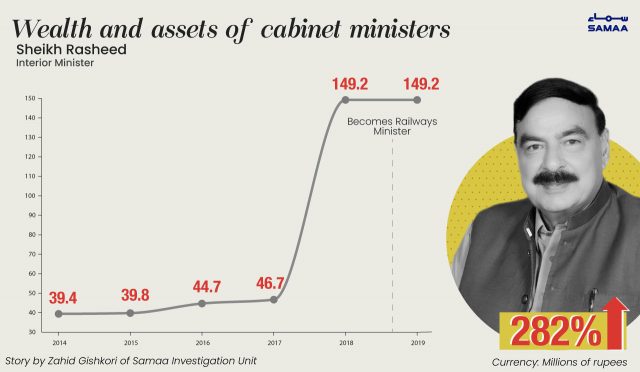 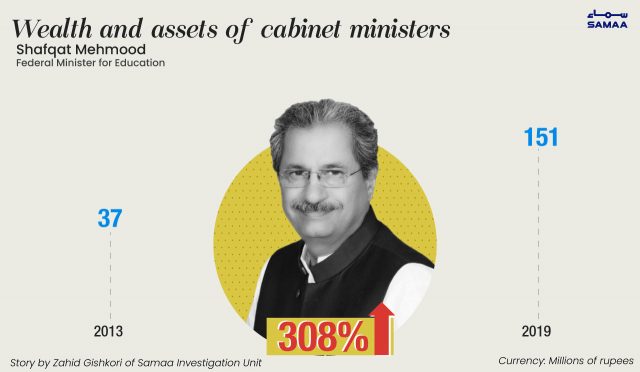 The former education minister says that his assets have not increased but the current value of his assets has been revealed. 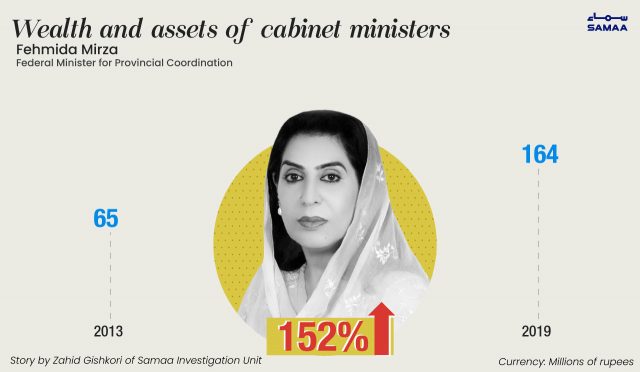 The total assets of Fahmida Mirza and her husband Zulfiqar Mirza, belonging to the PTI’s Grand Democratic Alliance party from Sindh, were Rs 65 million in 2013 which increased to Rs 164 million in 2019.

Fahmida Mirza says that her assets have not increased abnormally, she has sold her house and property in UK, Pakistan, the new asset has also been shown in the statements submitted to FBR and Election Commission. 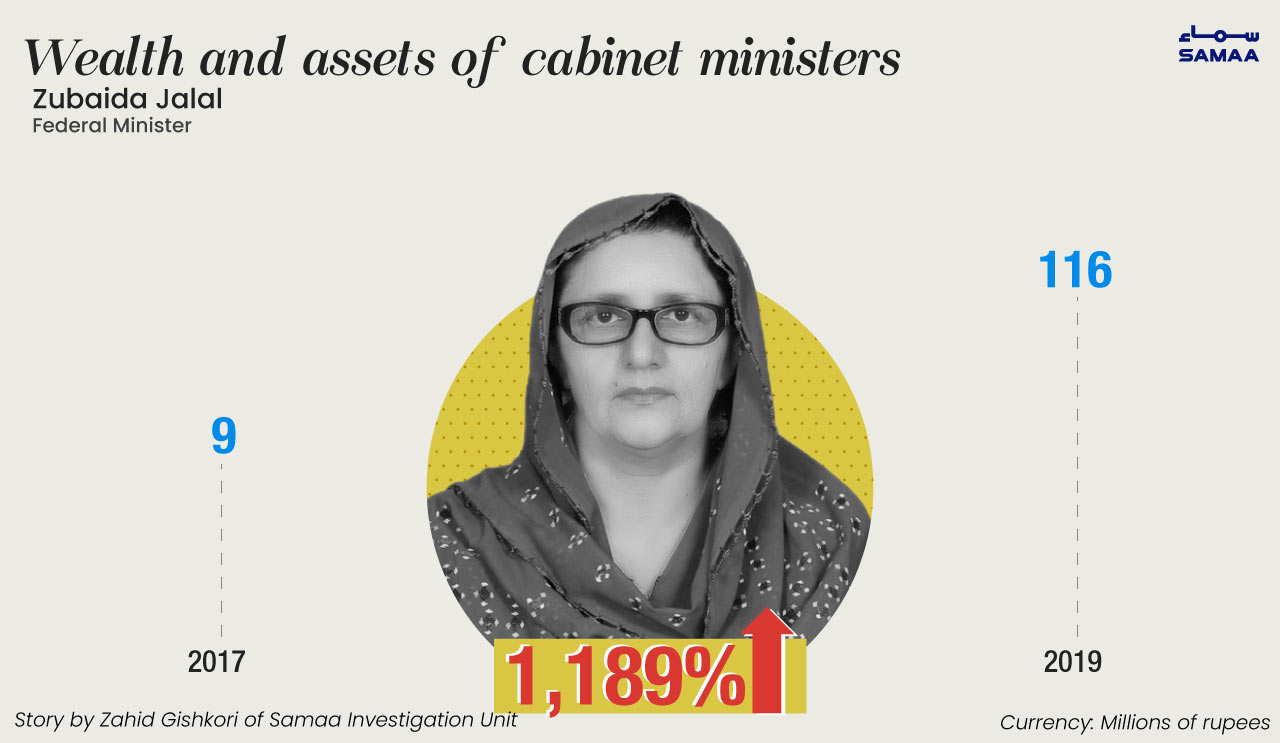 Zubaida Jalal and her husband belonging to Balochistan Awami Party (BAP) had a total assets of Rs 90 lakh in 2017. In 2019, their assets became worth Rs 116 million.

Zubaida Jalal said that there was no big difference in her assets, the business belongs to her husband, earlier she did not disclose the total value of assets and business. 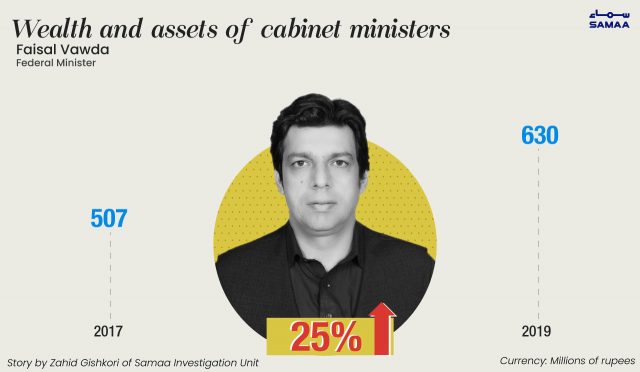 Faisal Vawda did not respond to a request for comment. 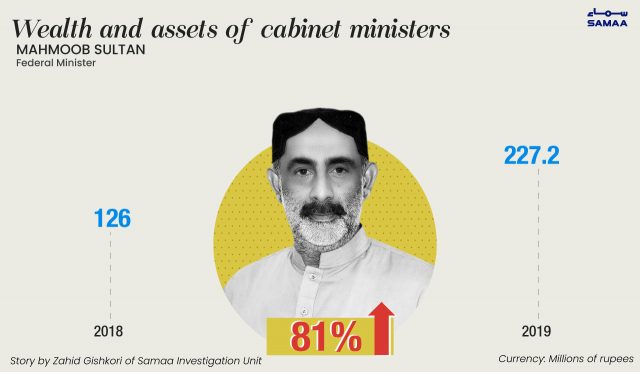 Mehboob Sultan also did not respond to an increase in his assets. 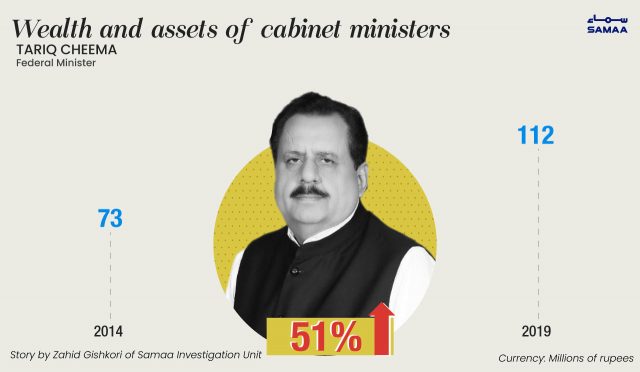 Tariq Cheema also did not respond.

Mati
Mati-Ullah is the Online Editor For DND. He is the real man to handle the team around the Country and get news from them and provide to you instantly.
Share
Facebook
Twitter
Pinterest
WhatsApp
Previous article49 Pakistanis imprisoned in US jails
Next articleAsad Mahmood, Khurshid Shah visit NHA Headquarters