LAHORE, Pakistan: Feminists and human rights defenders have vowed to engage together in collective efforts toward strengthening the women’s movement in Pakistan.

They were participating in a two-day National Feminist Convening that concluded on Sunday at Ali Institution of Education in Lahore.

At least 150 women feminists and activists from across the country came to attend the convening.

The Feminist Convening by Shirkat Gah – Women’s Resource Centre was divided into parallel sessions which were meant to enable a discussion around some key themes including misogyny and respectability politics; occupying online and offline spaces; feminist creative expressions; gendered labour dynamics; demarginalising the intersections of religion, ethnicity and ability; displacement, land rights; the politics of space; building and strengthening links with allies, and international commitments.

In these sessions, participants highlighted and discussed different challenges being faced by women in the region. 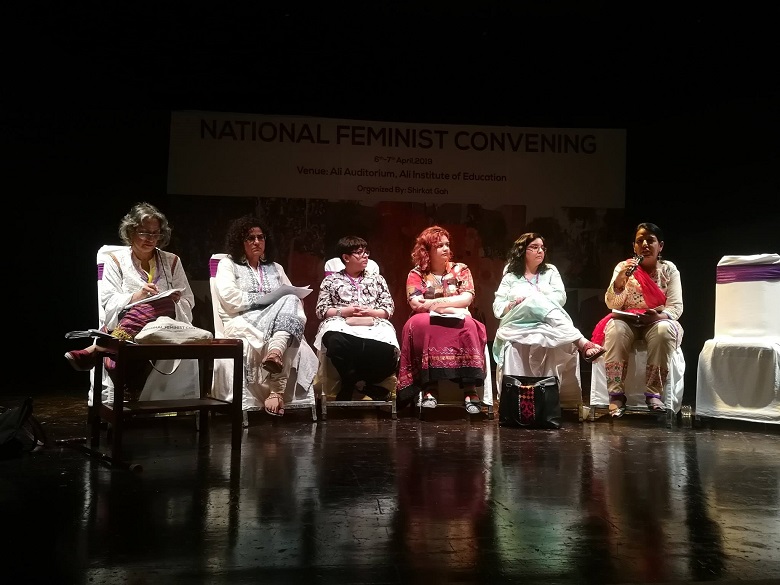 According to the organisers, this convening offered feminists and other social justice activists belonging to multifarious backgrounds from across Pakistan a space for furthering discussions, deepening analyses, sharing innovative strategies and hard-learned lessons to address both context-specific issues and long-term aim of gender equality.

Shirkat Gah’s Executive Director Farida Shaheed while talking to participants said that the convention responds to a need felt across South Asia and South East Asia to create a consensus to address emerging and older challenges.

The discussion during this two-day event highlighted various ways on how to strengthen the movement, ensure effectiveness in our activism, maintain a discourse on the role of the state and engaging with state structures, and formulate recommendations in order to achieve the needed changes.

The second day of the convening was dedicated to movement-building discussions and way forward. The discussion went on with intergenerational connection between feminists and building a movement together using both traditional and emerging platforms.

The feminists emphasised on making such platforms where they could share their common ideas, experiences and challenges.

The serious discussions were followed by open mic in which feminists expressed their concerns in different form. Feminist poet Neelum Bashir, Azra Abbas and Yameen Hameed read their feminist poems. Daughter of progressive poet and writer Fahmida Riaz also paid tribute to her late mother by reading her poem Aqeela.

The National Convening is part of a two-year initiative by Shirkat Gah, FEMPOWER! which aims at strengthening feminist agenda by supporting women’s movements, deepening feminist understanding, expanding the number of and solidarity between activists and inserting feminist thinking into other social movements and organisations.

Mati
Mati-Ullah is the Online Editor For DND. He is the real man to handle the team around the Country and get news from them and provide to you instantly.
Share
Facebook
Twitter
Pinterest
WhatsApp
Previous articleNew US CENTCOM Commander General Kenneth F McKenzie Meets Pakistan’s Civil-Military Leadership
Next articleMushahid Hussain praises New Zealand PM at Asia Europe Political Forum in Colombo