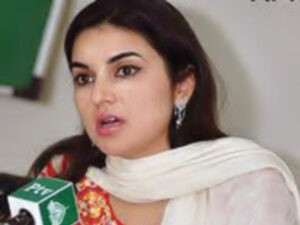 Kashmala Tariq briefed the president about the Federal Ombudsman Secretariat for Protection against Harassment (FOSPAH)’s role in creating a harassment-free working environment. She informed him that her institution provided speedy justice and 93 percent of the registered cases had been disposed of.

The Federal Ombudsman said that the Ombudsman had created awareness by holding seminars and press conferences and as a result of that marked increase in the number of cases had been witnessed.

Kashmala remarked that women represented over 50 percent of Pakistan’s population and they needed to be provided a safe working environment.

President Arif Alvi appreciated FOSPAH’s role in the provision of speedy and cheaper justice to the people. He said that the institution needed to be further strengthened so that speedy justice could be provided to the people.

The president underscored the need for initiating awareness campaigns through print and digital media so as to sensitize the people about the role of Ombudsman in quick redressal of their complaints.

It is worth-stating that FOSPAH is an autonomous quasi-judicial statutory body working for protection against harassment at the workplace.

It aims to create a harassment-free working environment.

Recently, the government of Pakistan has empowered FOSPAH under “Enforcement of Women’s Property Rights Act, 2020” to decide cases related to the inheritance of women.