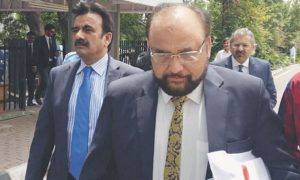 ISLAMABAD, Pakistan: The Federal Cabinet has removed Wajid Zia as the Director General of the Federal Investigation Agency (FIA).

Wajid Zia was appointed to the Office in November 2019.

Sources said that the Federal Cabinet approved the summary to remove Wajid Zia through circulation.

Sources said that the Inspector General of Khyber Pakhtunkhwa Police Sanaullah Abbasi has now been appointed as the new FIA Chief.

They said that the Commandant of the Frontier Constabulary (FC) Moazzam Jah Ansari has replaced Sanaullah Abbasi as the IG KPK while Salahuddin has been appointed as the Inspector General FC.

Wajid Zia first rose to fame when he headed the Joint Investigation Team (JIT) to probe the Panama Papers Case in 2017 involving the former Prime Minister Nawaz Sharif and which eventually caused the latter’s ouster from the Office. Later, Zia also served as the Inspector General of Pakistan Railways Police.

Sources said that Wajid Zia has now been appointed at the National Police Bureau.