ISLAMABAD, Pakistan: The National Assembly was informed that the Foreign Direct Investment (FDI) in Pakistan amounted to US$ 3,753.4 million from August 2018 to October 2019.

The details of amount of FDI made in Pakistan during the period from August 2018 to October 2019 with Country-Wise and Project-Wise break up; 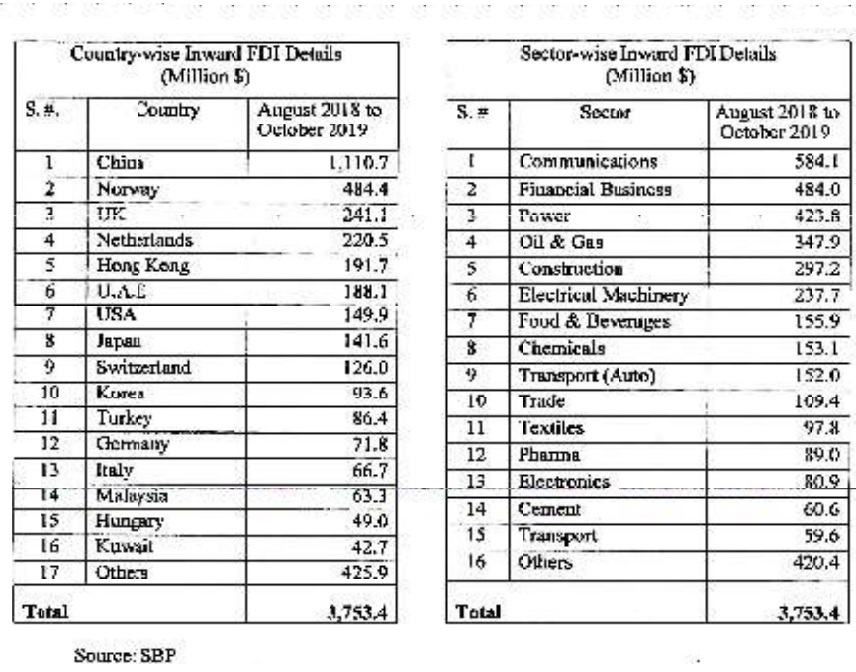 The Minister In-Charge of the Prime Minister’s Office shared the above data with the House in response to a question asked by Mohsin Nawaz Ranjha of Pakistan Muslim League-Nawaz (PML-N), and also told that under the current Investment Policy 2013, foreign investors are not bound to get approval from the government (BoI) for making investment in Pakistan.

The House was told that under the Foreign Exchange Manual 2002 of SBP, investors will have to register themselves with the State Bank of Pakistan. It was further told that the SBP do not compile cases of under process investment separately.

However, following project proposals are under consideration and at initial phase;

– Setting up of Oil Refinery at Gwadar

– A joint venture between Malaysia’s Proton Motors with local partner Al-Haj Faw Motors for manufacturing of vehicles in Pakistan.

Mati
Mati-Ullah is the Online Editor For DND. He is the real man to handle the team around the Country and get news from them and provide to you instantly.
Share
Facebook
Twitter
Pinterest
WhatsApp
Previous articleNames of 18 Public Sector Entities (PSEs) being privatized
Next articleHUAWEI Y9s – A Truly Premium Midrange with Outstanding Design and Features