Pakistan shocked the whole world by winning extensive war against terrorism in minimum possible time and without foreign help because the entire nation stood together and military operation led by Pakistan Army reclaimed writ of the State at every corner of the country including former Federally Administered Tribal Area (FATA) and did successful transformation of this troubled area into a land of opportunity which offers scenic beauty, hospitable community and excellent road networking. Areas of former FATA are now throbbing with domestic tourism industry and awesome valleys of this land are hosting thousands of thousands of tourists coming from all parts of Pakistan and even from abroad.

According to data collected by DND News Agency from tourism sector, valleys of former FATA are becoming one of important choices for individual tourists, backpackers and private tour operators.

“His temperament, like his clothes, is picturesque and elegant. He loves fighting but hates to be a soldier. He loves music but has a great contempt for the musician. He is kind and gentle but hates to show it. He has strange principles and peculiar notions. He is hot-blooded, hot-headed, poor and proud”

“Tribe wars with tribe. Every man’s hand is against the other and all are against the stranger … the state of continual tumult has produced a habit of mind which holds life cheap and embarks on war with careless levity”

Located in the north west Pakistan, erstwhile FATA (Federally Administered Tribal Area) – now merged with Khyber Pakhtunkhwa province – is mountainous region along the border with Afghanistan. Historically, FATA along with eastern Afghanistan had remained a conflict zone and an area for great game between major powers right from Alexander the Great to invaders from Central Asia. It remained an Achilles heel for all warriors.

In modern time, this area played a major role in shaping global and regional power; from Russia – British contest in 19th century to Soviet occupation of Afghanistan in 80s to present day when US along with regional stake holders are looking for peace in Afghanistan FATA has become a linchpin of international power play.

More recently after withdrawal of former Soviet forces from Afghanistan (when FATA became a strategic base of resistance in Afghanistan), FATA and Afghanistan was left as an ungovernable and free for all zones.

The birth of Taliban, which filled the power vacuum in Afghanistan in early nineties and their rise to power saw FATA become a hornet nest of Jihadi outfits like Al Qaeda and Taliban. Despite efforts by Pakistan to manage the conflict in Afghanistan, FATA remained a transit zone for Jihadi groups where they had established a de-facto government.

Why is Afghanistan so important to Pakistan?. With almost 5 million Afghan refugees in Pakistan during Soviet occupation to 1.6 million at present, it topped the list of refugees hosts in the world. Pakistan remained and is the main supplier of strategic food material and supplies for Afghanistan. Afghan transit trade is the only viable option available to Afghanistan; Karachi serves as the main conduit for commerce and trade.

Pakistan joined the Global War on Terrorism in post 9/11 scenario and become a battle ground for one of the most vicious and longest wars in history. While Pakistan become a front-line state in this war and helped international community to stem the tide of terror in the region, she found herself subjected to Hybrid War with faceless and amorphous enemy supported by hostile agencies and their surrogates within Pakistan.

Although whole Pakistan (including major  urban centers) was badly affected by relentless terror attacks, erstwhile FATA became the ultimate battle ground forcing massive internal displacements, casualties in men and material and creating a trauma on collective psyche of a whole generation. Meanwhile a sophisticated information warfare was launched by enemies of Pakistan, especially India, with an objective of creating hopelessness and desperation in people of Pakistan.

Pakistan stood firm and through an epic saga of sacrifices and resilience (where people stood shoulder to shoulder with Army and LEAs) and started rolling back the scourge of terror, brick by brick. 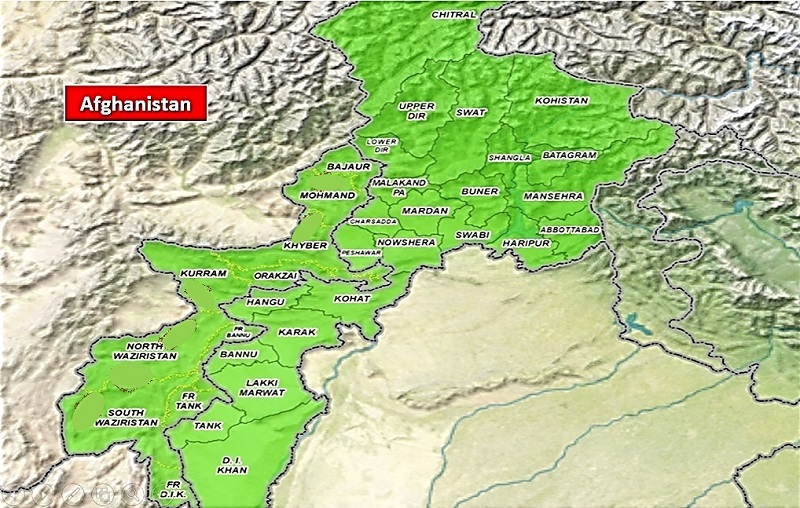 FATA, the saga of sacrifice written in pure blood

Treacherous terrain ridden with terror networks and cobweb of asymmetric warfare, FATA had a peculiar challenge, it borders Afghanistan across a porous border, with divided tribes living along Pak-Afghan border and even villages and houses split by Durand Line. Main challenges of operations in FATA included:-

Actions taken by army and government with support of people

By the time the nation and state of Pakistan meandered through above mentioned challenges (2003-2014) Pakistan had suffered billions of dollars in economy and massive casualties. APS tragedy in 2014 became Pakistan’s Pearl Harbour, the horrendous terror attack on innocent children and teachers and scenes of blood soaked class shook entire nation. Top Politico Military leadership concluded that enough was enough, and Pakistan had to go all out against the terrorist backers and surrogates.

Army and LEAs with the help of people of Pakistan launched operation Zarb-e-Azb, before that major operations like Rah-e-Haq, Rah-e-Raast, Rah-e-Nijjat and Khyber etc had been launched to clear terror networks from two main agencies, North and South Waziristan.

By the time operation Radd-ul-Fassad (combing operation to clear last vestiges of terror from entire Pakistan) was launched in 2017 under leadership of COAS General Qamar Bajwa, Pakistan had suffered following casualties as cost of victory against terrorism:-

While Pakistan suffered huge losses in men and material, thousands of terrorists were killed or captured, millions of dollars of foreign currency of was recovered and their IED manufacturing enterprise and factories were dismantled. With fencing of Pak-Afghan border, cross border movement of terrorists, drugs and smugglers has reduced to almost 5% of what was happening before. Estimated cost to terrorists is as under:-

Overall planned fencing along Pak-Afghan border in 2611 kilometers is be completed by the end of the year 2020. Till now, 643 kilometers fencing on border including 462 kilometers in KP and 181 kilometers in Balochistan is completed.  A total of 843 border posts are planned out of which 233 have been completed while construction of 140 posts is underway. Due to improvement in security situation the number of check posts in rear areas has been reduced by over 31% during 2016-2018 resulting in increased trade and tourism activities.

As part of military strategy and especially after APS attack a major drive was launched to win hearts and minds of the people. These include:-

Peace and normalcy in FATA

Greater Pashtun wisdom has prevailed as the people have rejected the narrow ethnicity based slogans being sponsored from abroad and are showing resolve to stand with the state on road to peace, development and hope. With the grace of Allah Almighty and a long hard fight by Pak Army/LEAs, supported by resilient people, FATA is back to normalcy and is becoming a thriving hub of economy and tourism. FATA has also seen sports activity and the brave people are contributing to sports at National and International level.

Development projects in education, health and social development include following:-

Merger of FATA as part of KP (Khyber Pakhtunkhwa)

The biggest outcome of this long war has been mainstreaming of FATA into National Politics. An epoch making decision by the top Politic-Military leadership paved way for inclusion of FATA into KP and despite same resistance from spoilers it has proceeded as per plan:-

Elections in FATA, a testament to resilience of people of Pakistan

People are about to use their votes to directly elect 16 members to represent them in KPK assembly. Region will also have 4 indirectly elected women and 1 minority member in KPK assembly. The nation has expressed the resolve to spend over 100 Billion Rupees per year for next ten years in the erstwhile FATA with the aim to bring the area and its people at par with rest of Pakistan thus granting them all rights enjoyed by other citizens of the country. All parties have fielded hundreds of candidates and now a days FATA districts are bustling with political activities, rallies and election campaign.

Pakistan’s success in this long and hard war (since 2002) has come about through resolve of politico-military leadership, pursuit of policy objectives, sacrifices by Army, LEAs and the people of Pakistan (Especially those from former FATA and KP) and the fact that Pakistanis are a resilient nation. The victory of Pakistan Army and LEAs has been acknowledged as one of the major success stories of  21st Century Hybrid Warfare. No wonder demand for Pakistan Army to train other militaries has increased and  Pakistan is playing the role of a mentor in Middle East, Africa and South Central Asia. Pakistan can offer her expertise and services to entire international community in  how to conceive, train and conduct a defensive war against Hybrid Warfare.

Pakistan has faced extended periods of difficulties over last two decades. After facing a blame game for entire duration, the world at large is admitting and appreciating the role of Pakistan for hope of peace in Afghanistan. The entire leadership of the world from the US to Russia and from Arab World to China is eager to stand alongside Pakistan. Pakistan has successfully undermined the proxies launched by its enemies, who now stand isolated and surprised.

Peace in Afghanistan will open unique opportunities for the people of erstwhile FATA. It is important for the Government to remain focused on provision of services and for the nation to stand alongside with the deprived people of former FATA. Similarly, it is expected from greater Pashtun and tribal wisdom not to let this great opportunity get wasted in shallow and hollow slogans of hate, division and narrow ethnicity. Let us all grab the opportunity together to move on the road to peace, development and hope with unity, and collective wisdom.

Mati
Mati-Ullah is the Online Editor For DND. He is the real man to handle the team around the Country and get news from them and provide to you instantly.
Share
Facebook
Twitter
Pinterest
WhatsApp
Previous article
Instant messaging and Image Reviews: Daraz seeks to empower customers
Next article
PM Imran Khan to protect Pakistan’s interests during his US visit: Dr Firdous
Share
Facebook
Twitter
Pinterest
WhatsApp