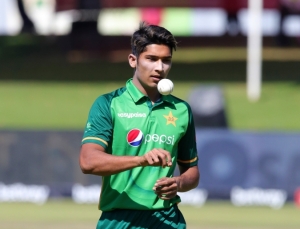 LAHORE, Pakistan: The Pakistan Cricket Board (PCB) on Thursday announced that fast bowler Mohammad Hasnain’s bowling action has been found to be legal after the amount of elbow extension in the reassessment was within the 15-degree level of tolerance permitted under the ICC Illegal Bowling Regulations.

As such, he can now resume bowling in international cricket and all domestic cricket worldwide.

Mohammad Hasnain was suspended from bowling following tests conducted on his bowling action at the ICC’s accredited testing centre in Lahore on January 21. The test report, which was reviewed and verified by the Cricket Australia’s independent expert, had found his bowling action to be illegal.

Hasnain underwent reassessment of his bowling action on 21 May at the ICC’s accredited testing centre in Lahore and the report was again verified by the Cricket Australia’s independent experts, as required under the ICC regulations.

Hasnain was reported for a suspect bowling action in January during Cricket Australia’s domestic cricket competition.

Mati
Mati-Ullah is the Online Editor For DND. He is the real man to handle the team around the Country and get news from them and provide to you instantly.
Share
Facebook
Twitter
Pinterest
WhatsApp
Previous articleAamir Liaquat Hussain dies
Next articleCamon 19 series; TECNO to Globally Launch new Stylish Icon in the Tech world