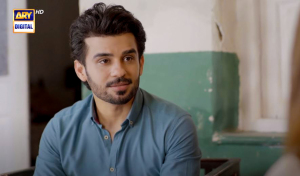 Pakistani drama industry is stepping up its game, because of incredible actors like Fahad sheikh who mold themselves completely in character. Fahad Sheikh is mostly seen as male lead role in dramas nowadays keeping hooked up audiences on screen whenever he appears in any role. Fahad Sheikh is making us fall for his acting skills and appealing personality with his sensational acting and spectacular body language, guises, and manifestations, especially in Azmaish. Ever since the recent episodes aired, Fahad sheikh has become a crows-pleaser. As the audience expected this drama to be another blockbuster by Fahad Sheikh, it has become cherry-picked performance by his fans. Azmaish looks like a trial for making Fahad Sheikh a top lead role actor in the Pakistani drama industry. Backbreaking work and his dedication and creativity will make him a superstar in less than no time. 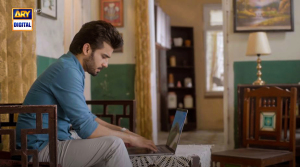 Like his masterstroke performances in the previous project, Fahad Sheikh is doing wonderments in Azmaish as well. He has been saying in his interviews that he only chooses those projects that seem challenging and peerless to him. Azmaish is one of them. The way he handled all the layers of the character of Basit is incomparable. He was a calm and innocent guy supporting his family, a submissive employee, and a kind-hearted person at the starting of the drama. But as the story forged ahead, we saw the real inimitability in character. He then became a good son-in-law, brother, and a silent lover suppressing his feelings for Nimra (Kinza Hashmi) which depicted the strong character of Basit.

From being a tight-lipped person to act like a boss in office Fahad sheik has covered all the aspects of Basit’s character so flawlessly. Azmaish is becoming more thought-provoking with each passing episode, and it’s only because of Basit’s character who managed to surround himself with all the attention with the opening of every layer in character. Now we know that why Fahad Sheikh chooses this lead role for him and it’s because of the versatility and uniqueness of the storyline.

Acting is all about the delivery of dialogues, emotions, and expressions in a way that the actor totally forgets the real personality and packed down himself in the character wholeheartedly. Fahad Sheikh’s expressions depicted his situation every time. Either it was about being helpless to save Nimra from family torture or it’s about giving divorce to Shiza in anger.

Recent episodes of Azmaish have been a turning point in the story, and the way Fahad Sheikh carried this revolution is fair to middling. After In many episodes of watching Fahad Sheikh as a selfless person, his fans finally saw him in a different tone which made everyone more excited. Here is the start of beautiful chemistry between Nimra and Basit, the aversion and revenge of Shiza. From here the story is going to be in between three characters only. Azmaish fans are expecting more twists in the storyline, especially in Basit’s character. We are enthusiastically waiting for upcoming episodes of Azmaish which are going to be full of page-turner performances by Fahad Sheikh, Kinza Hashmi & Yashma Gill.

5 Signs You Have Poor Mental Health

3 Reasons Why We All Need Flexa Plus