Islamabad, Pakistan: The Lower House of Pakistan’s Parliament – National Assembly – is though about to stand dissolved when its tenure will expire on May 31, 2018; according to Free and Fair Election Network (FAFEN),  Mir Taj Muhammad Khan Jamali – a former Chief Minister of Balochistan affiliated with Pakistan People’s Party (PPP) as Member of current National Assembly – though he died in 2009.

Taj Jamali breathed his last on April 2, 2009 after a protracted illness at 64. He remained the Chief Minister of Balochistan from 1990 to 1993, and was a member of the National Assembly after being elected on PPP’s ticket in 2008 general elections from NA-266 Nasirabad before he died.

However, as per the information available on Openparliament.pk – a Portal of FAFEN having details about the assets and liabilities of MNA, MPAs, and Senators – Mir Taj Muhammad Jamali is still alive and a member of the existing National Assembly of Pakistan from Awami National Party’s (ANP) platform. 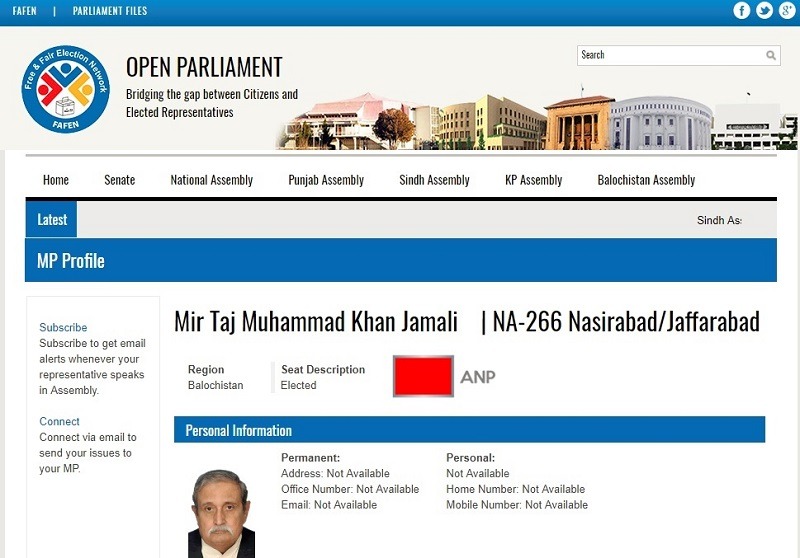 It is worth mentioning here that Taj Jamali’s Cousin and the former Prime Minister of Pakistan Mir Zafarullah Khan Jamali is the current member of the National Assembly from NA-266 Nasirabad.

Established in 2006, FAFEN – an alliance of more than 50 Civil Society Organisations – has already earned a well enough reputation as its surveys and election analysis are paid due consideration by mainstream media, political analysists and lawmakers.

It may be mentioned that DND had been calling on given number on FAFEN website 051-8466232 but number was not picked up despite of several calls were attempted. A mail has been generated on official email address of FAFEN for its version that would be included in this news once received.

Mati
Mati-Ullah is the Online Editor For DND. He is the real man to handle the team around the Country and get news from them and provide to you instantly.
Share
Facebook
Twitter
Pinterest
WhatsApp
Previous articleDownload Polling Scheme of Sindh for National Assembly General Elections 2018
Next articleKhaqan inaugurates Multan-Shujabad Section of M-5