The North Atlantic Treaty Organization (NATO) has been in numerous wars in Europe, Afghanistan, Libya, and Iraq. They were not protecting member states from attack, but on the offense and instigating conflicts far from Europe and the North Atlantic.

The first NATO attack was on Bosnia in 1995 involving 400 aircraft and 5,000 personnel from 15 nations.  1,026 bombs were dropped during the operation, 708 of which were precision-guided. On 19 occasions, depleted uranium munitions were used against targets around Sarajevo. The uninterrupted bombing of Yugoslavia lasted 78 days and involved 38,400 sorties, including 10,484 strike sorties. By the end, Serbian president Slobodan Milošević had capitulated. The NATO bombing was illegal, as it was done without the authorization of the UN Security Council.

The next NATO attack was on the former Yugoslavia in 1999. NATO launched its campaign without the UN’s approval, stating that it was a humanitarian intervention. The UN Charter prohibits the use of force except in the case of a decision by the Security Council under Chapter VII, or self-defense against an armed attack – neither of which were present in this case. The NATO bombing killed about 1,000 members of the Yugoslav security forces in addition to between 489 and 528 civilians. It destroyed or damaged bridges, industrial plants, hospitals, schools, cultural monuments, private businesses as well as barracks and military installations.

After an attack on World Trade Center in 2001 in New York City.  This was the only time in NATO history that Article 5 was invoked. This states an attack on one NATO member is an attack on all. Instead of attacking Saudi Arabia, the chief exporter of Radical Islam globally, NATO attacked Afghanistan and made innocent civilians there pay the price of the Saudi killers. The War in Afghanistan was a conflict that took place from 2001 to 2021. It began when the US and NATO invaded Afghanistan and toppled the Taliban-ruled Islamic Emirate. The war ended with the Taliban regaining power after 19 years and 10 months-long insurgencies against allied NATO and Afghan Armed Forces.

The reestablishment of Taliban rule was confirmed by the US and on 30 August 2021, the last American military plane departed Afghanistan, ending almost 20 years of western military presence in the country. According to the Costs of War Project, the war killed 176,000 people in Afghanistan; 46,319 civilians, 69,095 military, and police.

Next, was the NATO attack on Iraq for regime change. The invasion of Iraq was neither in self-defense against armed attack nor sanctioned by UN Security Council resolution authorizing the use of force by member states and thus constituted the crime of war of aggression, according to the International Commission of Jurists (ICJ) in Geneva.

From 2004 to 2011, NATO conducted an important support operation in Iraq. Ukraine was part of the action of NATO. Even though Saddam Hussein was the enemy of Al Qaeda and bin Laden, and had never harbored or supported Radical Islam in Iraq,  US President George Bush fabricated intelligence reports and sold the idea of a US-NATO attack, invasion, and occupation of Iraq.  The result is that regime change at the barrel of a gun left the country permanently destroyed, with a sectarian government the US imposed on Iraq reminiscent of Lebanon and still lacks electricity, water, and medical care. The Iraq Body Count project figure of documented civilian deaths from violence is 183,535 – 206,107 through April 2019.

NATO next turned its sights on Libya.  After Gaddafi gave a speech identifying the Al Qaeda terrorists being used to create regime change, NATO intervened with a bombing campaign to ‘save humanity. After 11 years, Libya is still trying to fight off the Radical Islamic terrorists who were initially supported by the west. 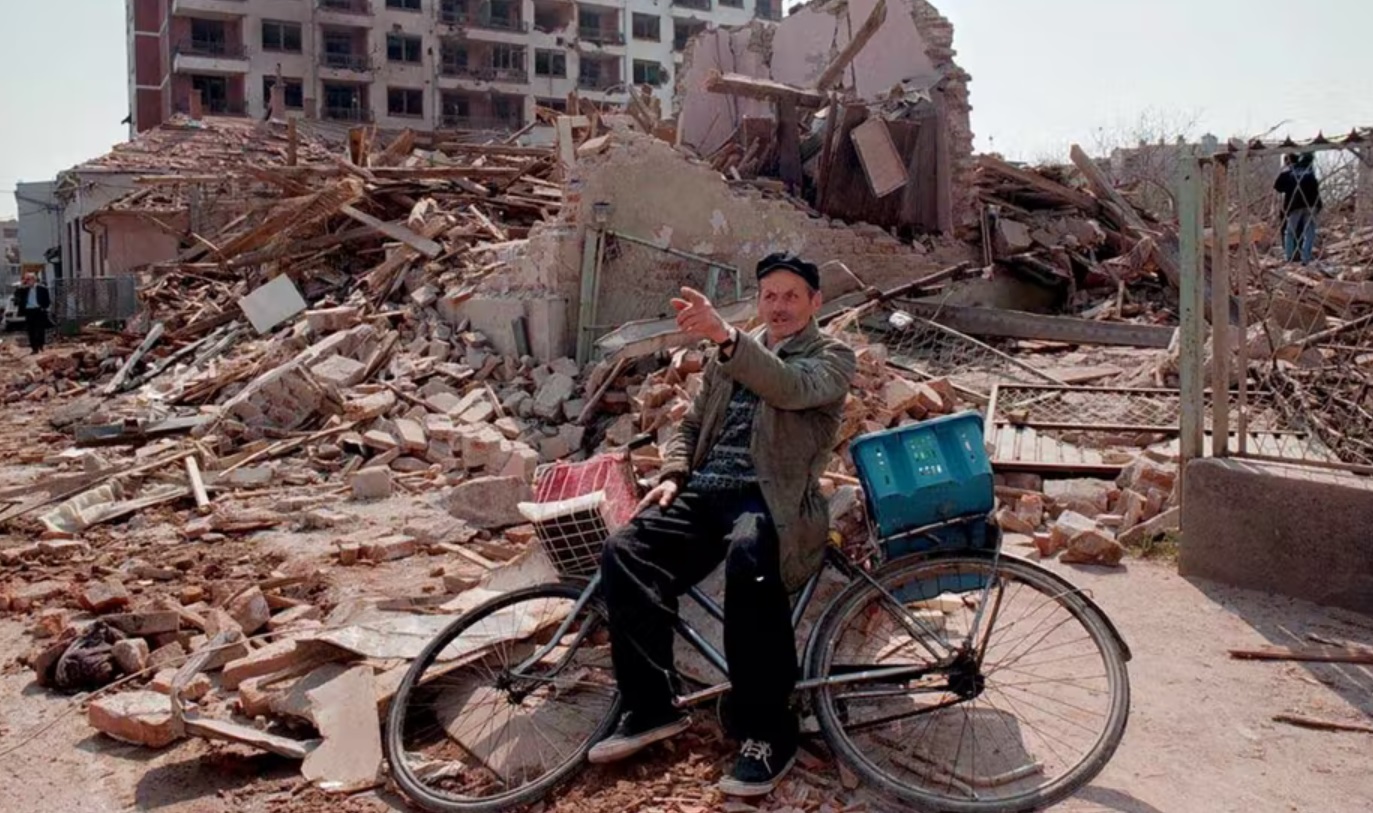 Before NATO’s intervention, Libya produced some 1.6 million barrels a day and boasted Africa’s largest proven crude oil reserve. The country is destroyed and may never recover, such as was the case in Afghanistan and Iraq. Amid the NATO attack on Libya for regime change, came the directive to begin another regime change project in Syria.  Hillary Clinton orchestrated the use of weapons confiscated from the Gaddafi government, shipped to Turkey, and then trucked across the border at Idlib and supplied to the terrorists.  The same Radical Islamic terrorists used in Libya were used by the US-NATO war machine in Syria. Even Libyan-Irish Mehdi al Harati commanded in Idlib.  Syria was saved from destruction by the entrance in 2015 by the Russian military who were asked by the Syrian government to prevent turning Syria into an Al Qaeda haven.  The US and NATO member Turkey have both invaded and occupied Syria as they prop up the terrorists, who they dub ‘rebels’, against the Syrian and Russian military.

Russia has every reason to distrust and is wary of the intentions of NATO.  Russia is being pushed into a corner with missiles right on its border aimed at Moscow.  NATO is not only a military group, but by its definition, it is a political group.  NATO promotes liberal western-style democracy. Russian politics don’t conform to the NATO-approved style.  When will NATO begin a destabilization program against Moscow?  The time-honored US-NATO war machine manipulations can begin at any time, and the western media will portray peaceful protesters asking for freedom as the victims of a Russian police crackdown. The dialog has already been written in Washington and London long before the first shots would be fired.

Russia’s western border is NATO’s eastern flank. American and British military advisors serve in Ukraine, and US missile defense systems sit in Poland and Romania, while NATO troops conduct exercises in Estonia, Latvia, and Lithuania.                             Russia is asking for a binding promise that Ukraine will never become a member of NATO, plus the removal of all NATO troops and weapons from 14 Eastern European countries that have joined the alliance since 1997.

Boris Yeltsin had prophetically warned that NATO’s enlargement could lead to a new division in Europe. The US secretary of state, James Baker, reassured Gorbachev that NATO would ‘not shift one inch eastward from its present position’ once it had safely taken in a reunited Germany; however, those words were never recorded in any mutually agreed document but remembered in Moscow. Due to unrelenting US pressure, NATO’s borders have advanced until they are next door to Russia and Ukraine.  President Putin has every right to be demanding assurances to guard his country’s national security.

History confirms that US-led NATO and ISAF have lost all war so far and history is watching a new theatre stage now in Ukraine.