Exclusivity is not as important as the life of a journalist

MediaExclusivity is not as important as the life of a journalist
MediaPakistani NewsTop Stories
By Central Desk
August 8, 2019

Kyiv, Pakistan: Exclusivity is not as important as the life of a journalist and no exclusive story or exclusive photo can bridge difference between life and death.

This was stated by editor-in-chief of DND News Agency (Pakistan) Agha Iqrar Haroon, a journalist with 32 years of experience, an expert in armed conflicts in different countries, dedicated to physical security journalists when covering resonant events, reports Ukrainian media.

While addressing to senior journalists at a seminar arranged by National Union of Journalists of Ukraine (NSJU) at its Press Centre, Iqrar Haroon talked about the activities of journalists in conflict zones and noted that there is a misconception that only combat zones (war zones) are conflict zones. Ambassador of Pakistan in Ukraine His Excellency Maj. Gen. (Retd) Zahid Mubashir Sheikh was also present in the lecture.

Haroon said the zones of conflict are those zones in which clashes between armed groups is going on and this can be in cities also even a full-scale military operations may not take place there, but these are all conflict zones. He cited several examples from different regions to explain how conflicts zones could be out of regular war zones.

He stated that Line of Control (LoC) in Kashmir Valley where India is using cluster bombs and attacking civilian areas often killing civilians and targeting cameramen who try to cover such violations is very serious issue for Pakistani journalists working in these areas and India was denying coverage to journalists in Indian occupied Kashmir and harassing and subjugating Kashmiri journalists.

Haroon who covered wars in Jafna Sri Lanka during 1999 and in Afghanistan during 1995-97 and terrorist conflicts in Swat Valley of Pakistan as well as in Baluchistan province of Pakistan cited examples from his experiences and said that over the past 10-15 years, Pakistani journalists have been injured, sometimes lost their lives in Swat and Balochistan where terrorist groups denied them to work and harmed them to stop them from covering the situation. He said though Swat and Balochistan were not formally considered war zones but there was armed confrontation, resulting harm to journalists.

Based on his experience, Iqrar Haroon distinguishes two journalistic professions, whose representatives are in the highest risk zone when working in conflict zones. The first category is video operators, because when working with the camera they do not know what is happening around them. “Cameraperson covering event in viewfinder of camera is like a duck or a chicken, who looks only ahead and he or she is then can be targeted easily” he said.

“The first rule that we should establish for videographers is mandatory work in pairs. If one operator searches for good coverage then there must be another operator (cameraperson) who will cover the back of a friend to avoid critical situations”, believe Haroon.

“I watched what was happening on Euromaidan and saw that some of the Ukrainian videographers worked independently, at great risk. Therefore, we emphasize that we must follow this important rule and work in conflict zones in pairs,” the lecturer emphasized. Also, when a journalist is sent to a conflict zone, he must inform at least 3 other journalists about where, when he leaves and when he should return. If the journalist does not return before the scheduled time, then it will be clear that something happened to him”. Haroon believes.

“Because if you fall into the hands of terrorists or criminal or armed groups, then first of all they will deprive you of communications. Remember, getting an exclusive story or shot is not as important as your life. Not a single exclusive material will return you to the family, “the speaker emphasized. 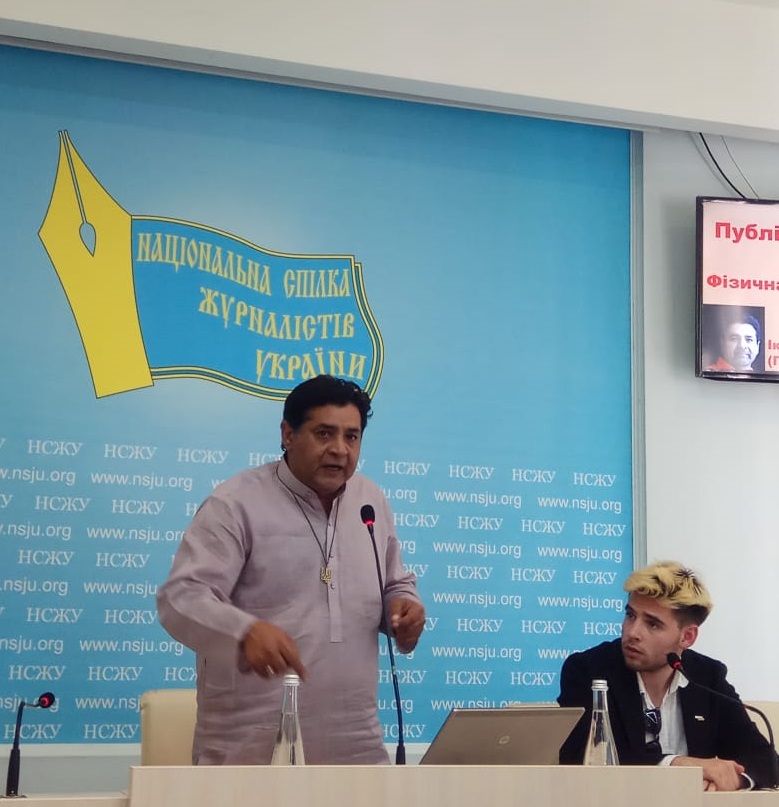 “A representative of a state news agency can say to himself” you need to stop so as not to risk your life, “freelancers are forced to look for exclusive content that journalists of other media will not dare to get. Therefore, they risk their lives more often. Therefore, having the opportunity, I want to call on the National Union of Journalists of Ukraine to pay more attention to the problems of freelance journalists, because if something happens to them, they actually have no one but the NSJ, whom you can rely on in difficult times “- he addressed to the chairman of NUJU Sergey Tomilenko. 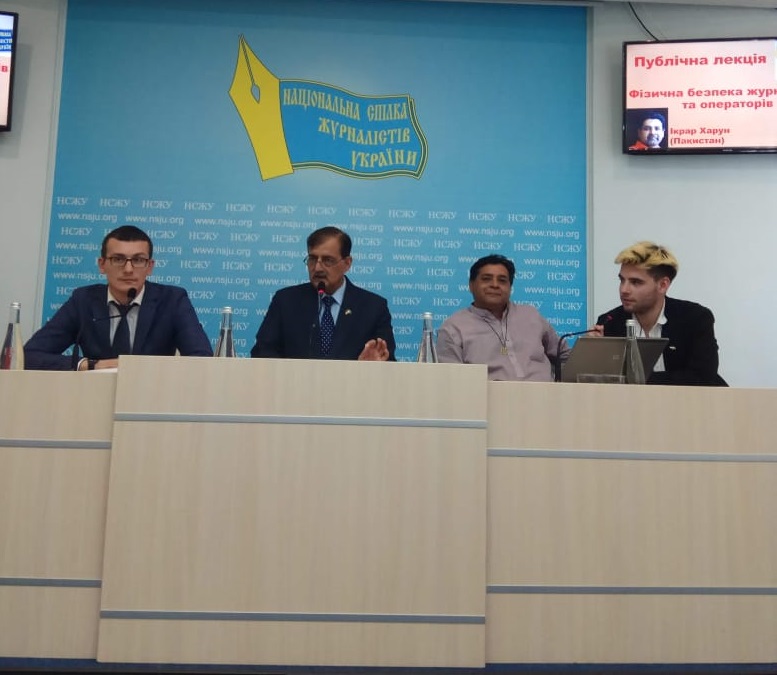 In addition, the editor-in-chief of DND News Agency believes that the largest conflict zone is in the hands of each of us – in mobile phones, other gadgets and social networks. Cyberbullying has become a huge problem, trolling and blackmail threaten journalists no less than weapons.

One of the main dangers of cyberbullying is that in real conflict zones, in combat zones, a person sees the enemy, but not during cyberbullying. The journalist does not know who is attacking him and plans to attack him.

It is important to understand that journalists are not ordinary people and they have a certain responsibility to society. Therefore, it is not necessary to personally comment on the actions of any political forces. If a journalist possesses incriminating materials against a certain politician or political force, then journalist should write about this material, make a video plot or a vivid accurate photograph, since this is precisely what is a communication tool of a journalist. Do not personally expose yourself to danger.

The lecturer noted that it is especially important for investigative journalists to inform their relatives about their travel routes. So that they know how the journalist moves (there are even special software for mobile phones for this) when he leaves home, when he returns home. Such information in case of abduction or attack on the way home will give more chances to escape and save a life.

“A journalist is a rather vulnerable person, but at the same time he is a very influential, strong person, if he knows when to stop and take care of his life. But remember, if you are killed, it’s possible that a resonant event will be arranged, perhaps a memory day will be announced in your honor but your children, your families will lose you forever. So don’t try to be supermen, don’t try to do something supernatural! Remember that we all remain ordinary people, take care! ” – summed up Iqrar Haroon.

As Ukrainian News reported, for six months in Ukraine, 36 incidents of physical aggression against journalists were recorded.