This year on World Press Freedom Day, Ukrainian journalists and media, as well as our colleagues in other countries, are concerned, first of all, about the threats which the coronavirus epidemic has brought to our work.

How can we protect our health, the health of our colleagues and relatives while continuing to carry out our professional duties? How can we provide our audience with timely and verified information which so important during emergencies? How to survive the media, which is now in danger of a financial crisis in addition to the virus?

But Ukrainian journalists had reason to worry about protecting their rights, freedom of expression and independence even before the pandemic began.

World Press Freedom Day, as noted by Council of Europe Commissioner for Human Rights Dunja Mijatovic is the cause “to pause and express gratitude to journalists and media professionals for their invaluable work for the public good. We must acknowledge their sacrifices, and those of their families, to serve our interests“.

But May 3, it is also an opportunity to identify “enemies of the press”.

“Enemies” can be particular officials (for example, 10 years ago, President Viktor Yanukovych was recognized as “Enemy of the Press №1 in 2010”) or phenomenon, or negative factors. Everything that demonstrates obvious hostility to weaken the journalistic profession.

This year the anti-rating “Enemies of the Press” by the National Union of Journalists of Ukraine includes 7 paragraphs. 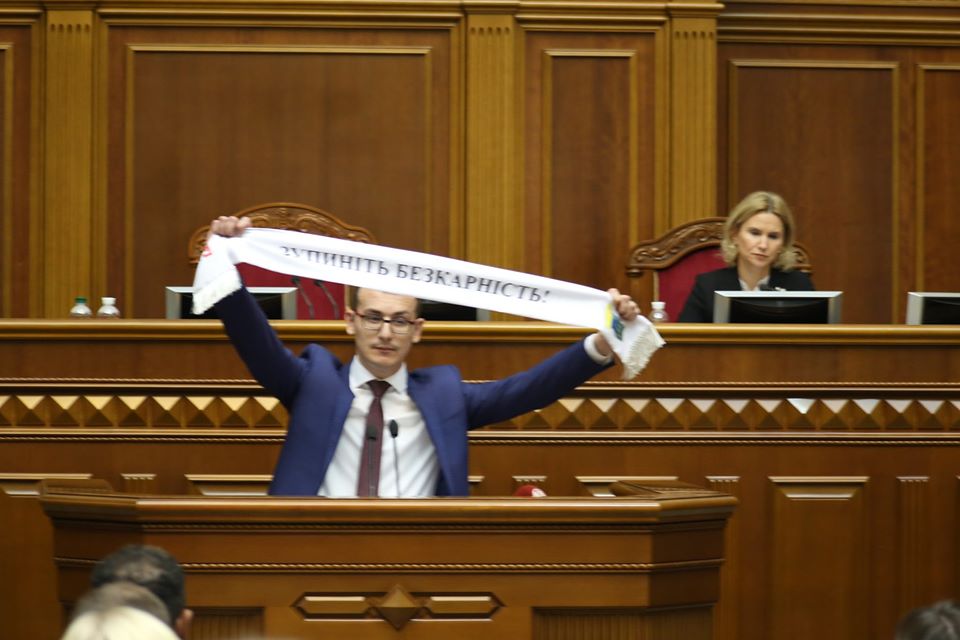 ANTI-RATING “ENEMIES OF THE PRESS”

The profession of journalists in Ukraine is dangerous for health and life. This can be confirmed by dozens and hundreds of my colleagues beaten in the performance of professional duties. And it is not about special circumstances or global unexcepted events, such as mass beatings during covering the protest on the Euromaidan in Kyiv in 2013-2014 or the injuring and capture of journalists in the Donbass. Journalists are beaten every month in a peaceful Ukraine. Last year, we recorded 75 cases of physical aggression against media workers in the framework “The Index of Physical Safety of Journalists in Ukraine” which conducted by the National Union of Journalists of Ukraine together with partner NGOs. In 2018, there were 86, and since the beginning of 2020 – nearly 30. Not threats or harassment on social media, namely physical attacks. Investigative journalist Vadym Komarov was killed in the Ukrainian city Cherkasy a year ago! During the epidemic, we record attacks by citizens on journalists who simply do their jobs by reporting compliance with or noncompliance with quarantine regulations.

An unacceptably high level of physical aggression in Ukraine is possible due to the lack of precedents for severe punishment for crimes against journalists. Cases do not go to court or drag on for years, or criminals do not receive significant penalties. After all, fines of several euros or guilty pleas with simultaneous exemption from punishment for expiry of the statute of limitations cannot be called a serious punishment. In November 2019, for the first time in 10 years, special parliamentary hearings on the physical safety of journalists were held. In fact, it was a forum of injured journalists. And holding such hearings that the previous Parliament refused to hold for years is the real merit of the new Ukrainian Parliament. (However, it is still the only one merit of Parliament for supporting journalists and media…) Similarly, since the hearings, the leaderships of the Ministry of Internal Affairs of Ukraine and the National Police of Ukraine have significantly changed their approach to responding to reports of obstruction of journalism. And now the recording of proceedings under the “journalistic” articles of the Criminal Code is taking place quickly. In certain high-profile cases, such as the arson of the car journalist “Radio Liberty” Galina Tereshchuk in January of this year in Lviv, law enforcement officials report on the establishment of the perpetrator and who ordered this crime. But it’s not enough not to talk about systemic impunity…

The author of the scandalous bill, which provided for criminal liability for journalists and the introduction of state censorship, is an absolute favorite of the Anti-Rating “Enemies of the Press”. Despite the resignation of Mr. Borodyansky, his outspoken intentions to interfere in journalistic activities by declaring “combating disinformation” have a lasting negative effect. Both in the form of criticism of international organizations and in the form of total mistrust of journalists in the information policy of the Government and the Ministry of Culture. In a country where under all Presidents fervently defended the right to freedom of speech, offer to send journalists to correctional works or to prison!

Many new politicians in Ukraine see freedom of speech as a technology, not a democratic good. And they want to protect “their” power and authorities, not “someone’s” freedom. As a result, the capacity to effectively protect the rights of journalists and the media has been significantly weakened in the current Parliament. The single majority retained in this convocation the “decorative” Committee of Freedom of Speech (only 5 MPs) but gave it minimal powers. Now information policy in the Ukrainian Parliament has sunk in the global humanitarian policy. Accordingly, instead of initiatives to support and develop independent media, the priority is to strengthen media regulation (through the draft Law on Media). Also, the Committee on Humanitarian and Information Policy is in no hurry to fill vacancies in the National Council of Television and Radio Broadcasting. This demonstrates that the regulator is a political asset of power, not an independent arbiter of the media sphere. And during the current economic crisis caused by the epidemic, parliament, and government, unlike the UK, Spain, Canada, Lithuania, are not implementing media survival initiatives. The media is referred to in the global package for support of the creative industries, which was created by the Chairman of the Committee on Humanitarian and Information Policy Oleksandr Tkachenko, but journalists and editors, especially local media, do not see themselves in these proposals. Even the elementary issue of permission to operate newsstands during quarantine is not being solved in the country (publishers from Zaporizhia, Kherson, Chernivtsi have been asking about this for almost two months). The Press trade is allowed even in the most coronavirus-affected countries such as Great Britain, Italy, Spain. In Ukraine, none of the top officials even thanked journalists for the important work that they, at risk of health, do during the epidemic. We are not the UK, where the government gives “key worker” status to all journalists, and the Minister of Culture personally writes letters to the top 100 brands calling for advertising in national and local media.

Top officials who are passionate about the benefits of digital technology admit that they do not need journalists. This message is picked up by local officials. As a result, journalistic inquiries and investigations are ignored. A separate reality is emerging: journalists and their audience (that is, most Ukrainians) and separately – are irresponsible politicians. Such indifference of officials weakens democracy in the country, because the press does not provide effective public control. Also, citizens are insufficiently demonstrating an awareness of the mission of the journalist profession and demonstrating a purely consumer attitude to the media.

In one of the poorest countries in Europe, which is Ukraine, the media is either subsidized or poor. “Working as a journalist is impossible to even feed yourself”, – said the first deputy editor-in-chief of the regional newspaper “Poltavsʹkyy visnyk” Vitaliy Skobelskiy. Journalists in the regions receive low salaries – 4000-6000 UAH (equivalent 135-200 Euro), unemployment is widespread.

Disinformation, manipulation or superficial and unprofessional journalism is another enemy of the press. Disinformation undermines the credibility of the media and journalists and harms public life. But the fight against fakes that governments have to wage in authoritarian countries or immature democracies such as Ukraine is used by officials to fight inconvenient journalists. We celebrate World Press Freedom Day in a pandemic and quarantine. COVID19 strengthens the “enemies of the press” and requires journalists to have cohesion and willpower to survive the profession and themselves.

As noted, International Federation of Journalists: “From the onset of the pandemic, journalists have amply proved the essential role they play educating their citizens, contextualizing the non-ending number crunching, explaining the science and, most importantly, unraveling the narrative played by politicians, asking the tough questions and exposing institutional failures. Thanks to their engagement, journalism as a public good, kept on thriving as the backbone of our democracies”.

Dear colleagues! Happy Freedom Day Press! Shame on the enemies! Thank you to all the journalists and media professionals working for the defense of truth and justice!