Entangled and perturbed over the outbreak of the COVID-19 pandemic, when the entire world is battling hard to overcome the ordeal, the affectionate and sympathetic attitude by the Egyptian Billionaire Naguib Sawiris towards the Pakistani Community was not less than a divine help for them in these testing times.

The pandemic merely fueled the anguish of three Pakistani Sailors in Egypt as they had already plunged into deep trouble two years ago – in May 2018 – when their ship ‘Sea Horse II’ couldn’t make to Dubai, leaving them suffer a fiasco in delivering a huge amount of money to the Egyptian authorities.

Over their failure, Pakistani Sailors including Captain Rehman Fazil, Chief Engineer Mushtaq Ahmed, and Chief Officer Sabir Hussain were sentenced to imprisonment in Egypt wherein they remained locked up in jail as earlier they couldn’t find the diplomatic support and then the COVID-19 pandemic overshadowed their hopes of getting freed. 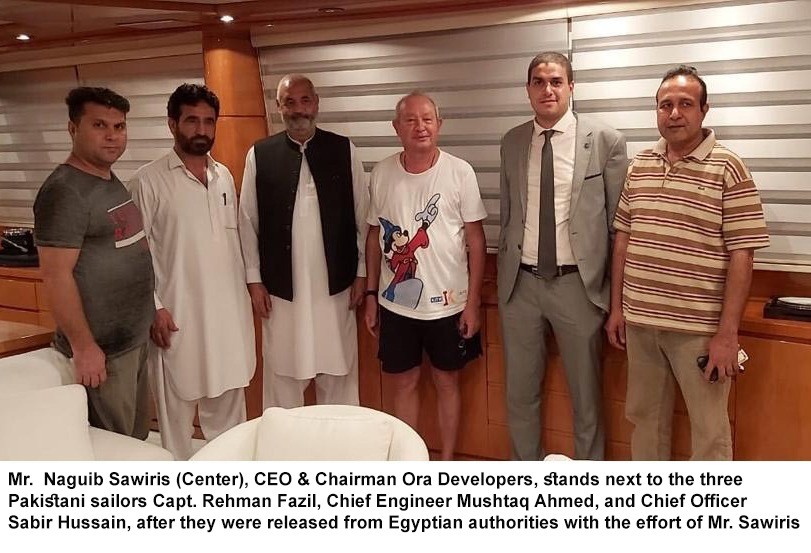 However, as the Egyptian Businessman Naguib Sawiris – the Chairman and CEO of Cairo-based Orascom Telecom Holding & the CEO of Ora Developers whose Housing Project ‘Eighteen’ is being developed near the New Islamabad International Airport – was approached to seek his help, he extended all-out support to ensure the release of Pakistani Sailors.

With his support not only the Pakistani Sailors were freed in May 2020 but Naguib Sawiris also arranged a Chartered Plane for them and 50 other Pakistanis stranded in Egypt to return to their homes just two days before Eid Ul Fitr, an evidence to prove his deep love and association with Pakistan.