ISLAMABAD, Pakistan: The Election Commission of Pakistan (ECP) on Friday issued a notification of dismissal of national assembly membership of Nawaz Sharif as per the directives of Supreme Court of Pakistan.

A press release issued by the ECP in this regard says “Consequent upon disqualification of Mian Muhammad Nawaz Sharif from being a Member of Majlis-e-Shoora (Parliament) by the Hon’ble Supreme Court of Pakistan, vide Judgment dated 28.07.2017 passed in C.M.A. No.4978 & 2939 of 2017 in Constitution Petitions No.29-30/2016 & 3/2017 titled Imran Ahmad Khan Niazi, Sheikh Rasheed Ahmed and Siraj-ul-Haq respectively Versus Mian Nawaz Sharif & others in terms of Article 62(1)(f) of the Constitution of the Islamic Republic of Pakistan, 1973, Section 12(2)(f) and 99(f) of the Representation of the People Act, 1976 (ROPA), the Election Commission of Pakistan hereby de-notify Muhammad Nawaz Sharif as Member National Assembly of Pakistan from Constituency No. NA-120 Lahore-III with immediate effect and in consequence  thereof the Notification No.F.2(40)/2013-Cord dated the 22nd May, 2013 to the extent of declaring him as returned candidate from National Assembly Constituency No. NA-120 Lahore-III stands rescinded with effect from 28.07.2017.” 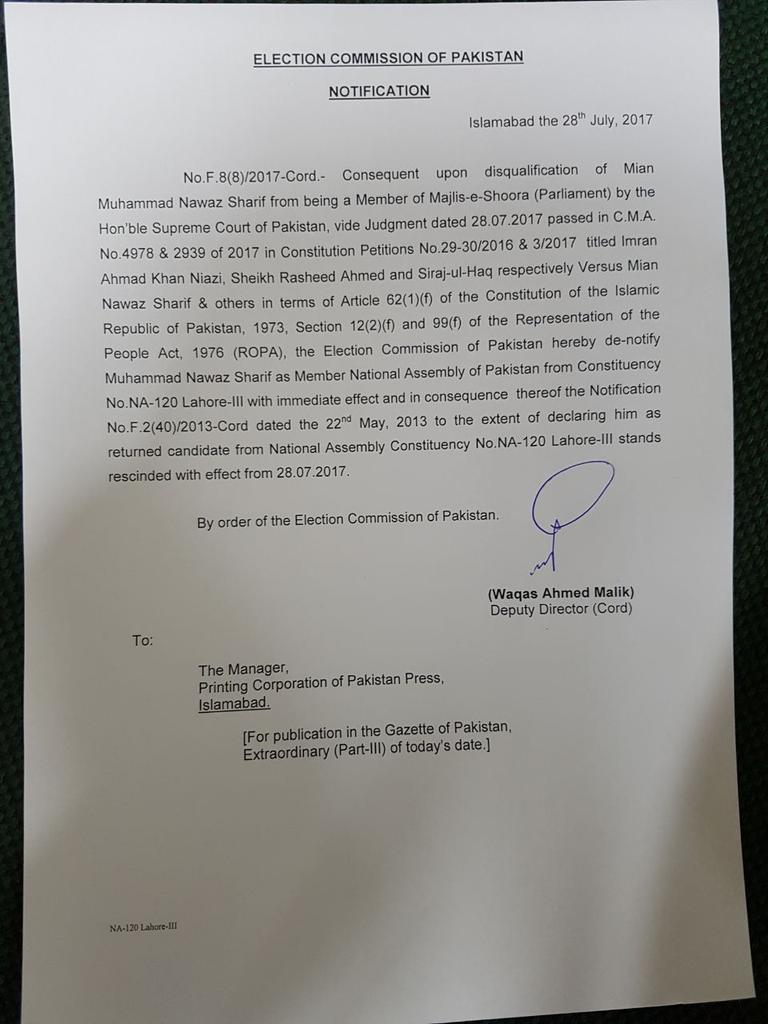 Mati
Mati-Ullah is the Online Editor For DND. He is the real man to handle the team around the Country and get news from them and provide to you instantly.
Share
Facebook
Twitter
Pinterest
WhatsApp
Previous articlePML-N likely to file review petition against SC verdict in Panama Case
Next articleShahbaz Sharif to be next Prime Minister of Pakistan?