ISLAMABAD, Pakistan: The Election Commission of Pakistan (ECP) on Thursday announced the schedule of general elections 2018, according to which, the polls will be held on July 25.

The schedule was announced by the Secretary ECP Babar Yaqoob in a Press Conference in Islamabad, saying that the schedule of general elections is under the law and the Constitution of Pakistan.

The Secretary ECP said that the schedule will also apply to seats reserved for women and non-Muslims in the National Assembly and Provincial Assemblies of Punjab, Sindh, Khyber Pakhtunkhwa and Balochistan.

Babar Yaqoob said that the Returning Officer (RO) will issue public notice on June 1, 2018 while the date of filing of nomination papers with the RO by the candidates will be between June 2 to June 6.

The Secretary said that the date of publication of names of the nominated candidates will be June 7 while the last date for scrutiny of nomination papers by the Returning Officer will be June 14.

The date for allotment of Election Symbol to contesting candidates will be June 29 whereas the polling will take place on July 25, 2018. 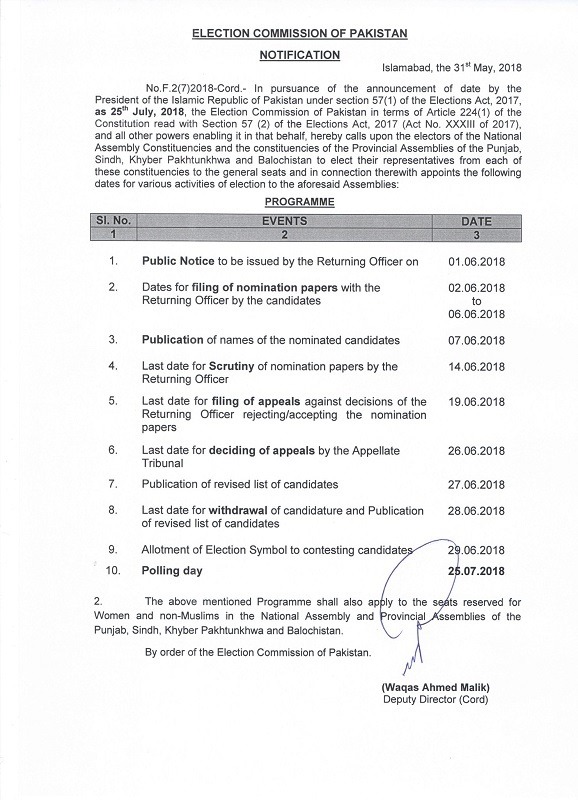 Mati
Mati-Ullah is the Online Editor For DND. He is the real man to handle the team around the Country and get news from them and provide to you instantly.
Share
Facebook
Twitter
Pinterest
WhatsApp
Previous articleHuawei Publishes Global Connectivity Index 2018
Next article2018 general elections: PTI announces its Candidates from Sindh for National assembly & Sindh assembly