Islamabad, Pakistan: An earthquake jolted federal capital of Pakistan at 5.28PM (Pakistan Times) on Sunday that jolted buildings and people ran out of homes and ran to open places. The epicenter of earthquake was within the territory of capital city of Islamabad as the longitude of epicenter was 33.586°N  while latitude was 73.003°E.

It may be mentioned that Rawalpindi and Islamabad are situated on an active faultline that is considered as “dangerous” by experts.


According to USGS live data system, the epicenter of 4.6 magnitude earthquake was 6 kilometer of West South West (WSW) of Rawalpindi Islamabad, Pakistan and it was generated at the depth of 30.9 km deep inside earth.

People came out of their houses in panic as the earthquake tremors were felt; however, no loss of life or damage to property was reported for far.

Pakistan being in the centre of tectonic plates has been vulnerable deadly earthquakes in past. 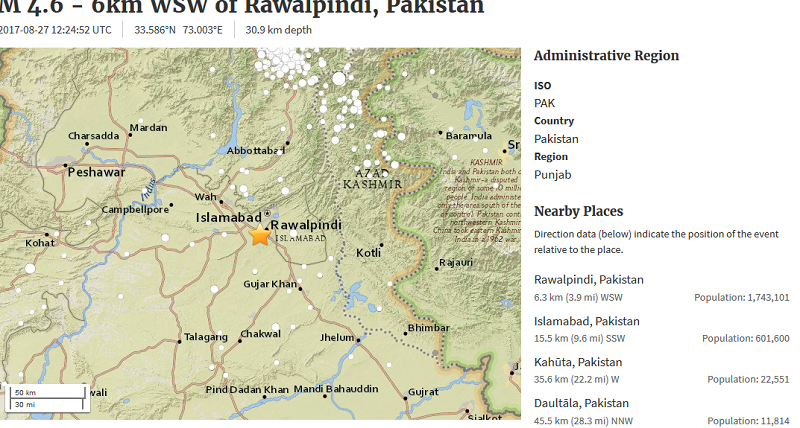 It may be mentioned that Pakistan geologically overlaps both with the Indian and the Eurasian tectonic plates. Provinces of Sindh and Punjab lie on the north-western corner of the Indian plate while province of Balochistan Khyber-Pakhtunkhwa lie within the Eurasian plate.