ISLAMABAD, Pakistan: The Ambassador of the Kingdom of Netherlands to Pakistan William Wouter Plomp accompanied by representatives from the Embassy of Netherlands met the Minister of State & Chairman Board of Investment (BOI) Muhammad Azfar Ahsan and the Secretary BOI Ms. Fareena Mazhar in Islamabad on Thursday.

The BOI leadership sensitized the ambassador about Pakistan’s liberal investment regime and the incumbent government’s commitment towards investment promotion.

Ambassador William Wouter Plomp was apprised on BOI’s role as the apex investment promotion agency and was also briefed about the Special Economic Zones (SEZs) along with the generous set of incentives available there. 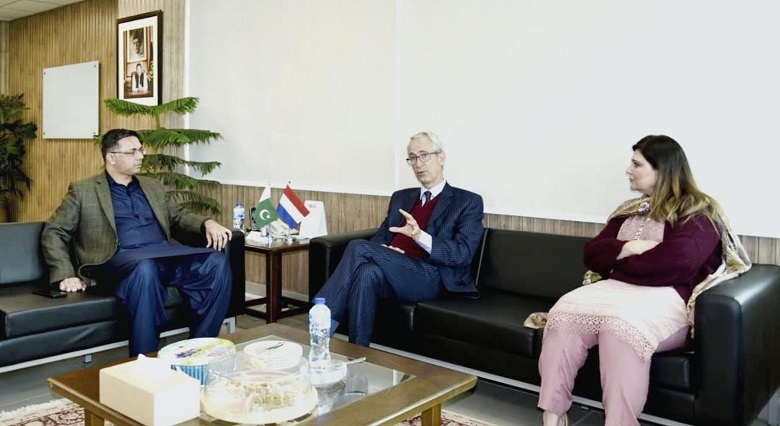 The ambassador shared that a Dutch delegation from the Dairy & Cheese sector will be visiting Pakistan from March 23-24 to explore investment opportunities and will have B2B meetings in Pakistan.

The envoy further added that FrieslandCampina has established the Pakistan-Netherlands Dairy Excellence Center in Lahore which will be inaugurated during the visit of a Dutch delegation from January 31 to February 1, 2022.

In this regard, the BOI is coordinating for arranging the delegation’s meetings with various ministers as well as the President and Prime Minister of Pakistan.

The ambassador communicated interest for investment in various sectors of Pakistan including maritime, food processing, dairy, etc from the Dutch side.

The Chairman BOI appreciated the interest of Dutch companies and invited them to participate in the Global Investment summit that is to be held in March 2022.

Ambassador William Wouter Plomp was pleased to learn about BOI’s efforts towards creating a conducive business environment in the Country and said that he would work towards further strengthening bilateral investment between the two countries with BOI’s assistance.