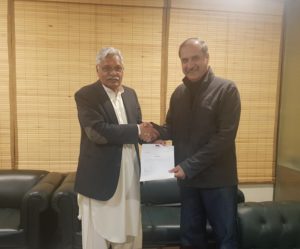 ISLAMABAD, Pakistan: Pakistan Tehreek-e-Insaf (PTI) has appointed Dr Abdullah Riar as the Secretary of its Office of International Chapters (OIC) with immediate effect.

In his regard, the PTI Secretary General Arshad Dad has issued a notification of Dr Abdullah Riar’s appointment as the Secretary of PTI OIC with the approval of the Chairman PTI Imran Khan.

“Dr Abdullah Riar is hereby appointed, with the approval of the Chairman as Secretary Office of International Chapters (OIC) with immediate effect,” said the notification.

The PTI secretary general expressed best wishes for Dr Abdullah Riar, and said that PTI Overseas Offices are an integral part of the party’s organization.

The secretary general hoped that PTI OIC will reach new heights of development under the leadership of Abdullah Riar.

Abdullah Riar extended gratitude towards the Chairman PTI Imran Khan and the Secretary General Arshad Dad for assigning him an important responsibility.

The secretary PTI OIC said that he would organize and mobilize workers around the world in the light of the vision of Imran Khan.

Mati
Mati-Ullah is the Online Editor For DND. He is the real man to handle the team around the Country and get news from them and provide to you instantly.
Share
Facebook
Twitter
Pinterest
WhatsApp
Previous articleAB de Villiers among Overseas Players reaches Dubai for HBL PSL 2019
Next articleSecurity plan prepared for Saudi Crown Prince’s visit to Pakistan