The Double Decker Bus Service will ply between Rawalpindi and Islamabad.

The Service will cost Rs 400. However, children under five years of age and people with disabilities will travel for free.

While addressing the Launching Ceremony, Usman Buzdar expressed the commitment to transform the Punjab province into a tourism hub.

The Chief Minister pointed out that there is a great potential of tourism in the province which will be exploited. He said that a project is on the cards to exploit the tourism potential of Kotli Sattian.

Similarly, tourism will be promoted in the Potohar region including Jhelum and Chakwal. 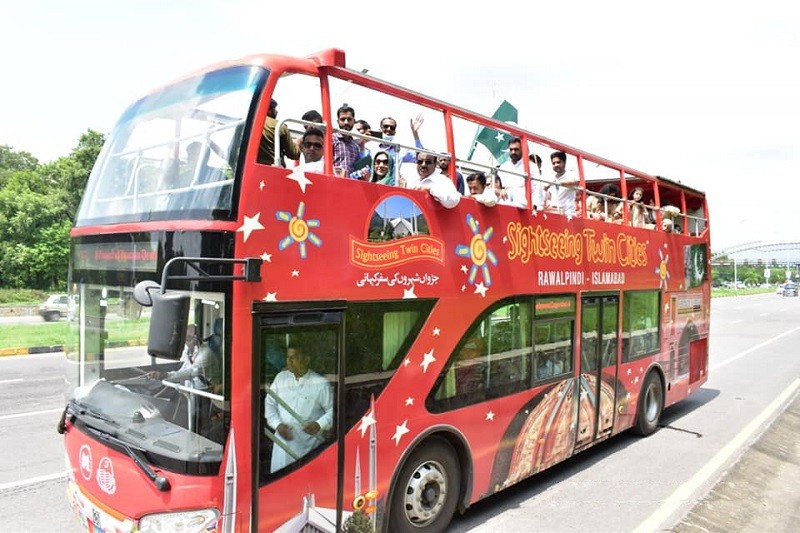 Referring to the Double Decker Bus Service, the Chief Minister said that it will facilitate the people to visit the tourist spots both in Islamabad and Rawalpindi. He said that the service will also be started in Bahawalpur.

The Punjab Chief Minister said that the development projects of Rawalpindi are very close to his heart and the people will soon hear good news regarding Ring Road project and Nullah Leh Expressway.

Usman Buzdar said that the development of backward areas is the priority of the government. He said that 33 percent funds have been allocated for South Punjab where a separate Secretariat has also been made functional.

Later answering the queries of media persons, the Punjab Chief Minister said that the government will soon launch the Safe City Project in Rawalpindi to ensure its security.

Sardar Usman Buzdar said that the provincial government will soon initiate the work on the Ring Road project to resolve the traffic problems in the City besides the expansion of Ammar chowk, Kohsar University Murree, and the Institute of Urology Rawalpindi.

Mati
Mati-Ullah is the Online Editor For DND. He is the real man to handle the team around the Country and get news from them and provide to you instantly.
Share
Facebook
Twitter
Pinterest
WhatsApp
Previous articleTank Central Library building gives a look of ‘ghost bungalow’, intimidating visitors
Next articleSaba Qamar – Age, Instagram, Career And Complete Biography