Do people really matter to you? Our dear politicians!!!!

Unless a huge “surprise” jumps in, the game for Prime Minister Imran Khan is apparently almost over now after its key ally MQM-P has parted away with the incumbent government to support opposition’s No-Confidence Motion. The outset of Prime Minister Imran Khan will set a precedent in Pakistan as of now, no elected government has ever been removed in the Country through a No-Confidence Motion. The joint opposition successfully managed to bag the support of the government’s allies – MQM-P and BAP – in addition to PTI’s defectors, guaranteeing the smooth sail of the motion against the sitting regime. Even brushing aside the government’s allegation of ‘international conspiracy’ behind the motion, the initial indigenous political maneuvering i.e. horse trading which paved the way for motion’s success against Prime Minister Imran Khan will also always remain under aspersions to mar its democratic nature. Lets assume that nothing undemocratic and illegitimate has been done but what prompted the opposition, government allies and disgruntled lawmakers to topple Imran Khan’s regime in a flash; do they have people’s concerns as the key determinant? I am afraid to say, “Big No”.

The incumbent government has been lashed out since the outset mainly for three reasons; inflation, bad governance, and unaccountability. Just after a year the PTI government took over, the entire world including Pakistan plunged into the COVID-19 pandemic, resulting in human casualties, businesses losses, and unemployment. It was followed by the soaring inflation in the post-COVID era as the commodities prices including of fuel worldwide went high and since Pakistan had unfortunately been turned into an import-led economy, the intensity of inflation in the Country was more severe. However, turning a blind eye to suggestion of locking down the entire Country by the joint opposition and media persons, Prime Minister Imran Khan opted to the smart lockdown policy and decided against shutting down the industry. For his decision, he had to face a severe criticism and even opposition members demanded the filing of an FIR against Imran Khan for endangering people’s lives by not locking the Country down. In the end, his decision turned out to be a sane one as a recent survey conducted by the South Asia Index based on the World Bank data also showed that Pakistan outranked other all South Asian Countries with the lowest unemployment rates in the COVID period. But certainly, like its predecessors, the PTI government failed to deliver as per its promises of improving the governance under a rotten system and holding the corrupt elements accountable. 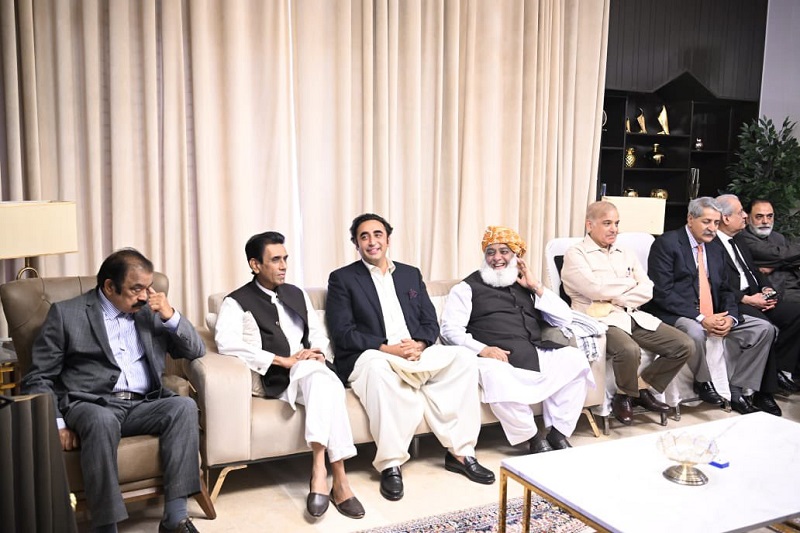 For the opposition, Imran Khan’s experience has been a disaster for Pakistan and his regime has turned out to be the most incompetent and most corrupt one. They claim that inflation and unemployment ratio in Imran Khan’s regime reached sky-high, forcing the people to commit suicide; therefore, it has become inevitable to get rid of him as Pakistan and Imran Khan can’t go side by side. Believing all opposition’s assertions about the sitting government, one may ask have they unveiled any roadmap to wipe out inflation, unemployment & bad governance etc from the Country if they return to power? It’s worth reminding that almost all parties in the joint opposition have been in power multiple times before; therefore, they are expected to elaborate practical and concrete measures they would take to remove people’s grievances rather than merely delivering political rhetoric. In a recent interview to anchorperson Nasim Zehra, when asked about his strategy to curtail inflation, the PML-N President Shahbaz Sharif also expressed his inability saying that fuel prices are determined internationally. It’s also worth mentioning here that from Zulfiqar Ali Bhutto to Imran Khan, all elected governments except PML-N’s last regime faced high inflation and PPP’s last tenure in the Centre from 2008 to 2013 was the second worst in terms of inflation – the first was ZA Bhutto’s era. No doubt, internal factors i.e. hoarding & mismanagement also cause inflation and the PTI government has been a failure in this regard but since the curbing inflation also falls under the provincial domain, the PPP’s Sindh government’s performance has also been pathetic. In PML-N’s last era from 2013 to 2018, inflation remained low mainly for two reasons; low commodities prices at the international market and artificially overvalued Pakistani rupee.

The first and the foremost question, the joint opposition needs to answer is that if the inflation and bad governance etc really matter to them, why they haven’t linked PTI’s performance with the No-Confidence Motion? The inflation has been an issue since PTI took over but if the opposition didn’t table the motion before, even now they haven’t been observed as setting PTI’s improved performance as a condition to retreat from the motion either. Additionally, in late February 2022, Prime Minister Imran Khan announced an Rs 240 billion relief package for the inflation-stricken masses but not only the opposition slammed the decision saying it would be detrimental for the Country’s economy amid the soaring fuel prices internationally but yet they also stuck to their plan of dislodging the government.

Even if we cast an eye on the PTI government, its defector lawmakers, and allied parties, no encouraging optics appear either. Prime Minister Imran Khan went on to replace his ‘Wasim Akram Plus’ with Chaudhry Pervez Elahi of PML-Q as the Chief Minister Punjab and offered MQM-P whatever the Karachi-based party desired to keep his government intact. But PTI’s all efforts and offers didn’t yield any fruitful results and except PML-Q, its nearly a dozen dissidents, Balochistan Awam Party (BAP), and PML-Q changed their allegiance to the opposition. PML-Q’s decision to stay aligned with the PTI government wasn’t based on principles; rather, Imran Khan blessed the party with merely 5 seats in the Centre and 10 seats in Punjab with the Chief Ministership of the Country’s biggest province. The Chaudhries of Gujrat had to grab the opportunity with both hands as though the same was being offered to them by the opposition but they doubted the intentions of Sharif family. The late night agreement between MQM-P and the joint opposition was also a reflective of how Pakistani politics is exercised, here you just need to table a power-sharing formula encompassing something to appease all stakeholders. It’s not difficult to apprehend that why all of a sudden, they back-stabbed the PTI government to further ensure the ouster of Imran Khan whom they had remained associated with for the last three and half years and enjoyed all the privileges. But again our politicians have been overwhelmed by their greedy nature and their inherited instinct to foresee the fall of Prime Minister Imran Khan, persuading them to deviate. Have any of them cited inflation and bad governance etc as the reason for their deviation? Or have any of them sought the guarantee from the opposition before joining them that the people’s plight will be alleviated once Imran Khan is removed? ‘Absolutely Not’!!! Their all negotiations with the opposition ended up in coveted agreements resulting in securing more power than they already have.

Thus, if the PTI’s disgruntled lawmakers and allied parties’ sole concern was to gain maximum in Imran Khan’s sinking regime and ensure their luxuries in the following setup, the joint opposition was in the quest of returning to power at any cost. Or what the Chief of Pakistan Democratic Movement (PDM) Maulana Fazlur Rehman once said in reference to the ouster of Prime Minister Imran Khan, ‘Khazan jae bahar aye na aye’ (The autumn must go, no matter it’s followed by spring season or not), implying that their solitary aim is to dislodge his government even afterwards, the entire system is wrapped up or the Country is plunged into political chaos.

Note: The writer Mati Ullah Khan has been working as the News Editor for Dispatch News Desk (DND) news agency since 2012. He did his Masters in International Relations (IR) from International Islamic University Islamabad (IIUI). He can be reached at matiullah.pk@gmail.com.