Note: The below article was originally published by AZERTAC on December 25, 2021. 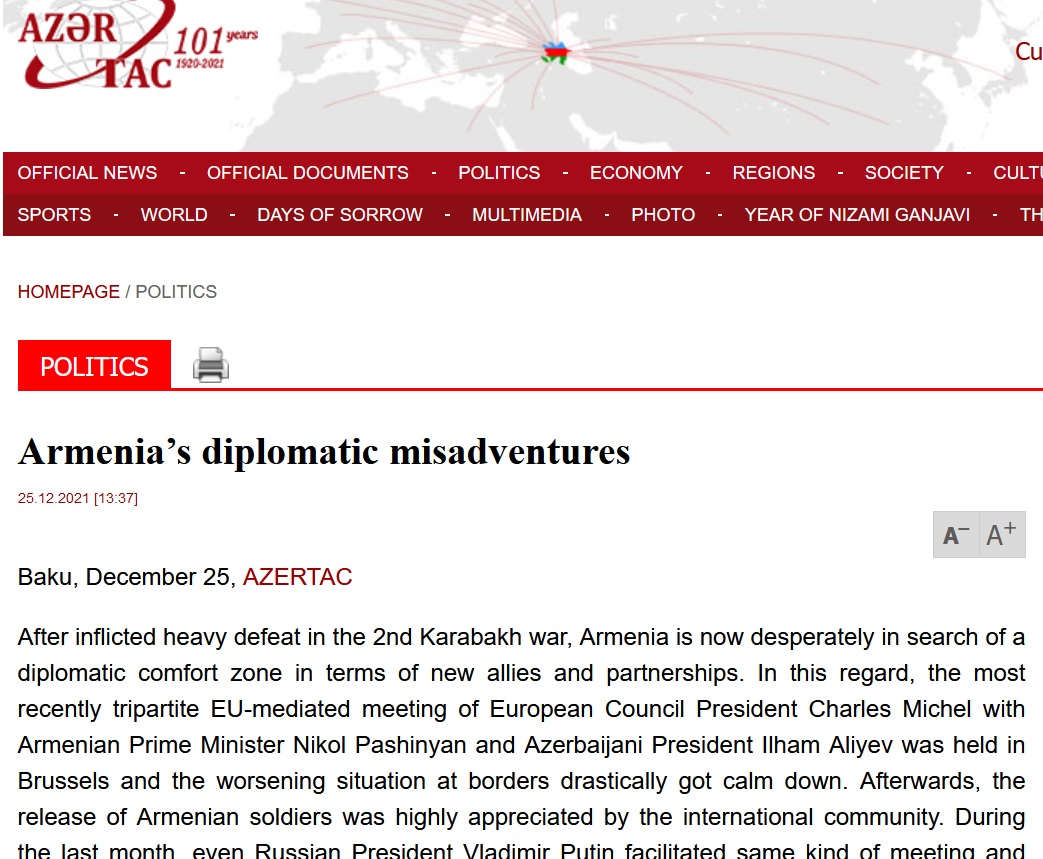 Monitoring Desk: While attending the Future Investment Initiative Conference in Saudi Arabia the Armenian President Armen Vardani Sarkissian spoke with a reporter of Arab news and tried to mislead the regional audiences about the strategic trilateral partnership of Azerbaijan-Pakistan and Turkey and termed it a religious bloc against his native country Armenia. Sarkissian distorted his own country’s historic shameful deeds against the innocent people of Azerbaijan and self-portrayed Armenia as a real victim of aggression, genocide, and infiltration from Turkey and Azerbaijan.

Thus he intentionally twisted the hard facts which are full of bloodily massacres, genocides, discrimination, and last but not least socio-economic marginalization, political isolation, and geostrategic exploitation against helpless people of Azerbaijan for centuries.

While playing for the press gallery, Sarkissian showed his intentions to have diplomatic ties/relations with Pakistan which appeared to be a diplomatic misadventure, and also held Pakistan and Turkey for his country historic defeat in the 2nd Karabakh war during which Azerbaijan successfully liberated its illegally occupied areas of fascist Armenia after 30 years.

Armenian President Sargsyan blamed Pakistan’s open and ideological support for the Azerbaijani-Turkish axis, and said that joint military drills with the Azerbaijani side further complicated the situation which is totally false, fake, and fictional, and only the act of self-inserted and self-defined parameters of diplomacy. He urged that Pakistan should not be ignored. He wished to have a dialogue with Pakistan even having good and deep ties with India.

While contacting reliable diplomatic sources in Pakistan it is evident that policy makers do not have any plan to start any kind of diplomatic negotiation with Armenia.

He even specifically mentioned the statement of Turkish Vice President Fuat Oktay of last week indicating re-approachment with Armenia in coordination with Azerbaijan which according to him at advanced stage. Moreover, he bluffed that even if Turkey were ready for the normalization of relations with Armenia.

On the other hand, Pakistan, Azerbaijan, and Turkey are strategic partners. Diplomatic relations among Pakistan, Azerbaijan, and Turkey are based on mutual respect, sharing unique commonalities of historical, religious, and political nature. After the establishment of formal diplomatic relations, there was no looking back and ties grew at a steady pace and the sky is the limit for their socio-economic integration, better political understanding, and greater regional connectivity and 2nd Karabakh war witnessed close liaison among three strategic partners i.e. Azerbaijan, Pakistan, and Turkey in terms of diplomatic, political, social and economic support.

Pakistan, Azerbaijan, and Turkey have cultural, social, religious, and civilizational ties for centuries. Right from the beginning, the governments and the successive political leaderships of these countries have been keen to further develop and consolidate the bond of friendship and brotherhood. These countries share a commonality of opinion on different regional and international issues and support each other on challenges faced. Turkish and Azerbaijan always supported Pakistan on just cause of Kashmir which is permanent and a regional balancing act.

Azerbaijan has been an active member of the OIC Contact Group on Kashmir.

Bilateral relations among these countries are constantly on the move, trade and economic ties have already been given new dimensions, and the most recently signed Shusha Declaration further strengthened the scope, utility, and strategic orientation of bilateral ties between Azerbaijan and Turkey.

The exchange of visits of Azerbaijan, Turkey, and Pakistani leaders as well as the other high-level delegations have played a pivotal role in cementing their socio-economic integration, greater regional cooperation, and last but not the least energy cooperation. The active participation of foreign ministers of Azerbaijan and Turkey in the recently held OIC meeting in Islamabad vividly reflects a close liaison among the three brotherly countries.

These countries have meaningful MOUs and agreements in political, economic, strategic, social, humanitarian, cultural, and other sectors that were signed during these visits formed a solid legislative base. Further increasing of military cooperation among these countries has developed a new “strategic dimension” to their relationships which would be a game-changer in the days to come.

The Nagorno-Karabakh conflict remained the bleeding wound for the Republic of Azerbaijan which remained a looming security threat to the whole region of South Caucasus. Azerbaijan’s successive leaders and people have been striving hard to resolve the Nagorno-Karabakh conflict with Armenia which shows its firm belief in diplomacy and dialogue and ultimately Azerbaijani President Ilham Aliyev succeeded to liberate all the illegally occupied areas from Armenia.

According to many research reports due to the Karabakh conflict more than 890 Azerbaijani cities, villages, and settlements, 102 thousand dwelling houses, 7000 public buildings, 695 healthcare facilities, 693 secondary schools, 927 libraries, 310 industrial and building enterprises, 464 historical monuments and museums, 6 state theaters and concert studios had been completely destroyed in the occupied territories.

Pakistan still does not recognize Armenia as an independent state because of its enmity with Azerbaijan state. In this connection, time and again Pakistan’s Parliament, Senate, and the standing committee on foreign affairs have been demonstrated solidarity with the government and people of the Republic of Azerbaijan. It has been condemning the occupation of Azerbaijani territories by Armenia and the genocide committed by Armenian armed forces in the past. Turkey, Saudi Arabia, and even Djibouti did not establish diplomatic relations with aggressor Armenia because of the previously illegal occupation of Azerbaijani territories.

Pakistan reaffirmed the sovereignty and territorial integrity of the Republic of Azerbaijan within its internationally recognized borders. In the past, as a principal stance, it demanded implementation of resolutions of the UN Security Council and the UN General assembly on immediate, complete, and unconditional withdrawal of all Armenian forces from all the occupied territories of Azerbaijan and called upon the international community and international organizations to urge Armenia for the implementation of these decisions. It supported the efforts of the Republic of Azerbaijan to resolve the Armenia-Azerbaijan Nagorno-Karabakh conflict by peaceful means.