DHAKA, Bangladesh: As the only male in his family after his father fell sick and had major surgery months ago, Mohammad Hasnain, 12, got a job at a food factory near Bangladesh’s capital, Dhaka.

Hasnain was among workers killed in a massive fire that broke out July 8 at a food processing factory in the industry-hub district of Narayanganj, the eastern city closest to Dhaka.

At least 52 workers were killed and 35 injured in the fire that is still under investigation. A leak on a gas pipeline or electric short circuit was initially cited as the possible cause of the blaze.

The bodies of 45 victims have been identified through DNA tests. Of them, 24 were handed over to families on Wednesday while the rest will be delivered next week, according to sources.

The boy, from a remote southern island district of Bhola, migrated to Narayanganj two weeks before the blaze. Poverty forced him to quit school and earn money for his family of five, including two sisters.

The dream of the destitute boy who wanted to take his family out of poverty came to a tragic end.

“After joining the factory in the third week of May, Hasnain told his family that he would come home to the village before Qurbani [the Muslim festival of Eid al-Adha],” the boy’s uncle Mohammad Jamal told Anadolu Agency while waiting for his body at the morgue in Dhaka Medical College Hospital.

Mohammad’s shocked mother was sitting almost stiff as tears rolled down her cheeks.

She could not hold her silence for long and at one stage she began to cry loudly and lamented.

“Please return my son to me. I don’t want anything except my little father,” she uttered in agony while dozens of others waited for the bodies of loved ones. 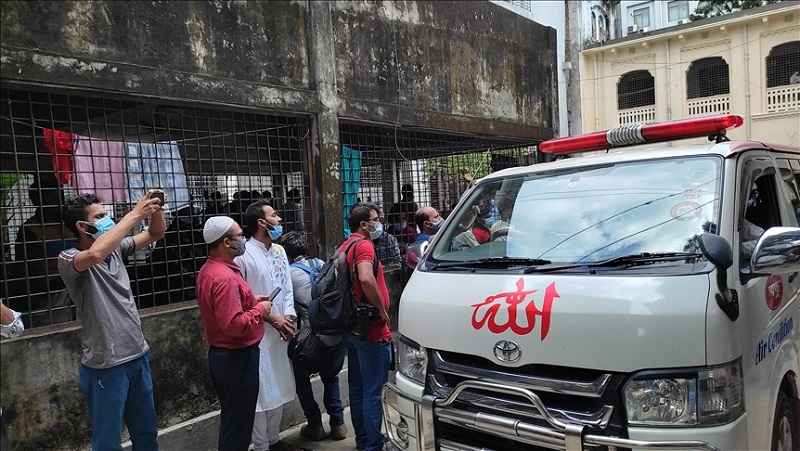 Begum, a resident of a nearby village, took a job because her husband’s income was not enough to properly educate Sumaiya.

Most of the income Begum made was spent on monthly school fees, tuition, and other educational support for Sumaiya who dreams of becoming a doctor.

Sumaiya’s father, who is a worker at a tailor shop, has a meager income that he modestly spends on the family.

“Who cares me now who tells me to read more and to eat more,” Sumaiya said while weeping at the morgue.

The government donated 25,000 ($300) to the families of the dead along with the body to perform burial rituals.

“We have given taka 25,000 to the families of each deceased for holding funerals as per present decision we have carried from our higher authorities and they will be given more financial aid later,” Additional Deputy Commissioner of Narayanganj, SM Mahfuzur Rahman, told Anadolu Agency.

Four local human rights organizations filed a petition within one week after the fire in the country’s apex court seeking taka 10 million [$119,000] to compensate the families of everyone who died. The petition is still under the jurisdiction of the court.

“Nothing can return my son. I want justice, not money,” the father of Mohammad Munna Mia, 16, told Anadolu Agency. “How can I carry this destroyed dead body of my son?”

Sitting on the floor, leaning over a wall, Mamtaz Begum, who was carrying a picture of her sister, Nazma Begum, 36, was lamenting at her loss. “How can I condole my sister’s kids. Who will give them motherly care?” she asked.

Due to weak management and congested structures in the south Asian country of nearly 165 million, deadly fires are frequent.

At least 70 people were killed in a massive blaze that engulfed several multistory buildings in the old part of Dhaka in 2019. Another fire killed 123 in 2010 in the same area.

In March 2019, a fire killed at least 25 in the upscale Banani area and wounded dozens.

Fire in slums is very common in Bangladesh. In June, a blaze gutted more than 500 shanties in Dhaka.

Rohingya refugee camps located in the southern district of Cox’s Bazar have also been affected, including a major fire on March 22 that killed at least 15 and gutted more than 10,000 shanties along with a camp-based Turkish field hospital in the world’s largest refugee settlement.

Professor of Economics at Dhaka University, Abu Ahmed, said the government should make a master plan to immediately sort out structures prone to fire risks.

“The capability of the Fire Service and Civil Defense authorities of the country should also be strengthened with more modern equipment and international standard training for firefighters,” Ahmed told Anadolu Agency.

Note: The above story was originally published by the Ankara-based Anadolu Agency on August 7, 2021.