I believe that Victorian literature is unique in a way that it leaves an impression how strongly society was divided between “Royal People” and  the “Common people”.

Common people were remembered and called by their professions instead of their names, giving them an impression that they do not exists as individuals rather their only identity is their work and their profession.

One can read such expressions in Victorian literature as mentioned below:

Oh that boy who is son of a cobbler.

I saw blacksmith while walking at narrow path along the river bed.

Daughter of milkman is ugly.

The time passed and we move to 21st century from Victorian Era but the arrogance of Imperialist approach remains there and latest example I see while reading news reports and watching western television shows about the first round of Ukraine Presidential Election in western media.

Foreign media particularly western media followed an unusual trend in reporting of Presidential election of Ukraine when almost entire western media did not use names of important candidates in their headlines of news rather called them by their professions like literature of Victorian era when people were called by their professions instead of their names in a form of derogation.

First round of election ended and now Ukraine is going for runoff election on April 21 but expression of taunting, derogation and making mockery of Ukraine Presidential candidates is still in foreign media.

Ridiculing, derision and contemptuous comments are still main course of reporting about two Presidential candidates who bagged millions of votes.

Volodymyr Zelensky who secured 30.24 percent of vote (5, 714, 034) is still just a Comedian not winner of first round of election while sitting President Petro Poroshenko who got 15.95 percent votes (3, 014, 609 votes) is just a “Chocolate King” who stood against the blatant aggression of Russia after coming in power. 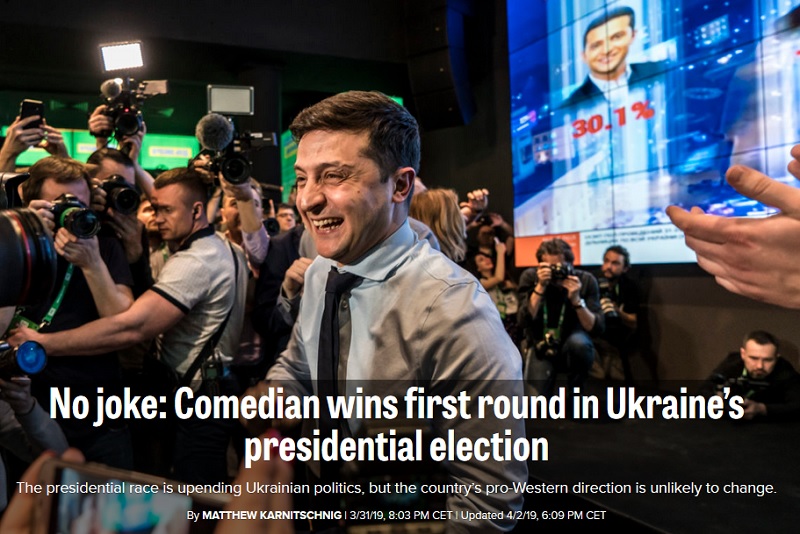 I believe that the perception or treatment of Ukrainian politicians as being of little worth, contemptuous language like King and Clown instead using their names in headlines is ridiculing the entire Ukrainian nation who is going through the one of the most sensitive phase of their history.

After first round of election, there is no change in reporting style of foreign media towards Ukrainian candidates.

Some latest headlines are hereunder:

I believe that Ukrainian Election Commission should take notice of this mockery of candidates and should snub foreign media.

Ukrainian are sovereign people and have to decide their future and one of two candidates will become President after April 21 and foreign media must show respect towards national leaders of Ukraine instead of laughing at choice of people.