ISLAMABAD, Pakistan: The visiting Chairman of Shura Council of Saudi Arabia Dr. Abdullah Mohammad Bin Sheikh who along with members of his delegation met President Dr. Arif Alvi at Aiwan-e-Sadr in Islamabad on Thursday.

Welcoming the delegation, the president said that Pakistan and the Kingdom of Saudi Arabia enjoyed deep historical ties and tremendous cooperation which needed to be further promoted for the mutual benefit of the two sides.

The president appreciated the Kingdom’s historical and continued support, and financial assistance to Pakistan in difficult times.

In the meeting, both sides reiterated their desire to take the existing Pakistan-Saudi Arabia relations into new heights in all areas of mutual interest.

Both sides underlined the importance to further strengthen parliamentary cooperation between the two brotherly Countries.

President Arif Alvi congratulated the Saudi leadership for its timely initiative to convene the 17th Extraordinary Session of the Council of Foreign Ministers of the Organization of Islamic Cooperation (OIC) on the humanitarian situation in Afghanistan.

The president lauded the role played by the Kingdom of Saudi Arabia for mobilizing the international community as well as announcing financial help during the recently held OIC Session of Foreign Ministers for the people of Afghanistan.

The president expressed satisfaction that the OIC Countries had given a strong message of hope, solidarity, and unity to the people of Afghanistan during this challenging time.

In addition, the president emphasized that the Islamic Countries should work together to address the challenge of Islamophobia. 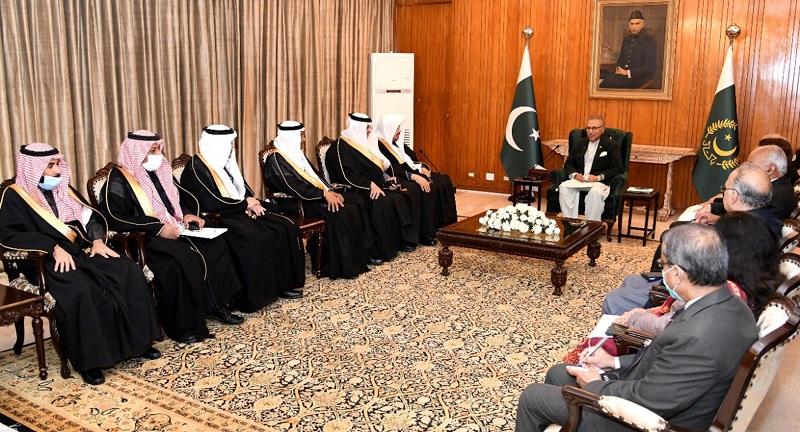 President Dr. Arif Alvi also highlighted the atrocities being committed by India against the innocent people of Indian Illegally Occupied Jammu and Kashmir (IIOJK) during the meeting.

The president urged the international community to put pressure on India to stop committing human rights violations and grant Kashmiris their right to self-determination in accordance with the UN Security Council’s resolutions.

The Chairman of Saudi Shura Council Dr. Abdullah Mohammad Bin Sheikh said that he considered Pakistan as his second home and emphasized the need to take practical steps to further improve bilateral ties.

Dr. Abdullah also congratulated the president on successfully holding the 17th Extraordinary Session of the OIC Council of Foreign Ministers on Afghanistan.