Monitoring Report: “With the death of Indian Defence Chief General Bipin Rawat in a helicopter crash along with 12 others closed the chapter of a big military turf war and integration attempts made by him within Indian forces,” comments Indian newspapers and electronic media.

The post of Chief of Defence Staff was introduced in December 2019 and Gen Rawat took the charge on January 1, 2020, as the first CDS of the Indian Military. He was also the head of overall military procurements. He worked in the position till his death in a helicopter crash on December 8, 2021.

General Rawat had an issue with Indian Air Force and that was the procurement of Dassault Rafale. He was of the view that all possible options (American, Russian and French) must be explored for procurement in the Navy, Army and Air Force in future instead of going only for one option. During a meeting in May 2020 with heads of forces, General Rawat categorically said that no procurement would be allowed without a competitive sheet of anything even for a simple riffle. Since forces had never been facing such questioning, therefore acceptance level for CDS went further low, resulting in a direct open contra between General Rawat and Indian Air Force taking place in July 2020. Moreover, forces chiefs considered the appointment of General Rawat as a politically motivated Prize Post given by Prime Minister Modi to adjust General Rawat after his retirement as the Chief of Army Staff (COAS) for his covert services to the BJP government.

When Chief of Defence Staff Gen. Bipin Rawat called the Indian Air Force “a supporting arm” of the military, specifically the Army, just like the artillery and engineering services, the Chief of the Air Staff, Air Chief Marshal R.K.S. Bhadauria, countered this, saying the Air Force is not just a supporting arm but has a wider role.

“The Air Force is required to provide support to ground forces. Do not forget that the Air Force continues to remain a supporting arm to the armed forces, just as the artillery supports or engineers support the combat units in the Army,” said Gen. Rawat. “They will be a supporting arm. But they have a charter. They have an air defence charter and support the ground forces in times of operations. This is the basic charter which they have to understand,” General Rawat said.

In response, Air Chief Marshal Bhadauria said “it is not a supporting role alone” that the Air Force plays. Airpower has a huge role to play in any integrated battle area. It is not an issue of support alone, and there are a whole lot of things that go into any air plan that is made”.

The integrated theatre command is a much more complex matter. There are issues in terms of some of the options that are being discussed,” he said, adding: “We must get it right. It is the most important reform that has an impact on warfighting. There are many issues when you set up to integrate theatre commands and many of those issues should be upfront looked at very clearly. We should clearly understand how we are going to structure it. Sort out the principle and sort out important issues and thereafter implement it. Every service has its own doctrine and has the best knowledge of how to employ the capabilities and capacities to get the desired results. “Whenever we have a system, which is integrated we must look at that entire doctrine. The abilities of the services must be brought in, and it must be a synergised result.

His death in an Air Force chopper is not only unfortunate rather left many questions and saying anything is too early but it is a great loss to Prime Minister Modi and the BJP government. In a statement in India’s Parliament on December 09, 2021, Thursday, Defence Minister Rajnath Singh confirmed that the chopper crashed suddenly without sending any SOS by the helicopter crew. Prime Minister Narendra Modi said Rawat had contributed greatly to modernising the country’s armed forces. 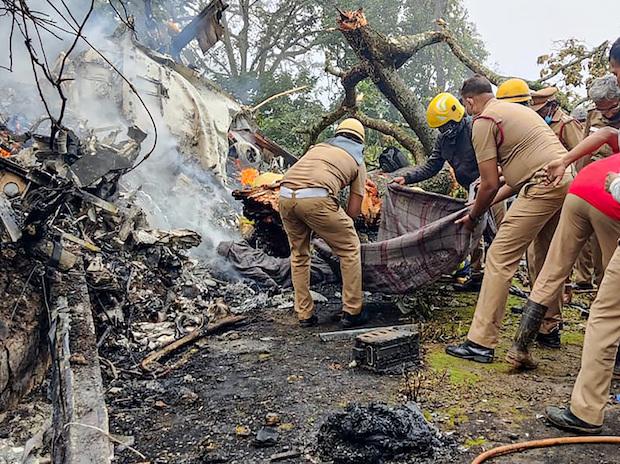 The lone survivor of the incident Captain Varun Singh is on life support at a military hospital and his survival could bring some light to this incident because this is the first incident of the crash of a Russian-made Mi-17V5 helicopter that is considered as one of the strongest and “Very Safe” for travelling.

In his brief statement in Parliament, Defence Minister said the Mi-17 V5 helicopter took off at 11.48 am on Wednesday from the Sulur Air Base. The base lost contact with the aircraft seven minutes before it was scheduled to land at a hillside military area at 12.15 pm. Locals spotted a fire in the forest near Coonoor and rushed to the spot where they observed the wreckage of a military helicopter engulfed in flames.

The Mi-17V-5 is the latest twin-engine iteration of the Russian-made Mi-17 transport helicopter and is used regularly for high-altitude operations. One of the most advanced military transports that can be used in any topography and weather, it is one of the most powerful choppers used by Indian defence forces.

India purchased and inducted these choppers between 2008 and 2018. This model is considered a “very reliable, safe, stable, and large” helicopter that is also used to ferry VIPs, including the President and the Prime Minister.

According to information available on the website of Rosoboronexport — the Russian arms supplier — the chopper is designed to “carry personnel, cargo and equipment inside the cargo cabin or on an external sling, drop tactical air assault forces and reconnaissance and sabotage groups, destroy ground targets and carry the wounded”.

In the history of Indian military aviation, two similar kinds of high-profile air crashes occurred during the 1950s and 1960s, wherein the aircraft carrying General rank officers crashed. However, in the 1950s crash, there were no casualties and all passengers ‘miraculously’ survived.

One such incident happened 58 years ago on November 22, 1963, in the Poonch sector of Jammu and Kashmir, in which Lieutenant General Daulat Singh and Lieutenant General Bikram Singh were victims. All six officers on board were lost in that crash.

Similarly, way back in February 1952, an IAF de Havilland Devon transport aircraft crashed near Lucknow. However, the miraculous survival of all passengers of was a godsend to the Indian Army.

“A complete investigation Report would take time but the initial report would be released within three months, commented an official of the Indian Air Force with the request of anonymity as he is not supposed to talk with a media person. Experts believe that it can be just an unfortunate incident but it can also be engineered but nothing could come out of even from complete investigation Report because such incidents are either natural and some are deep-rooted.