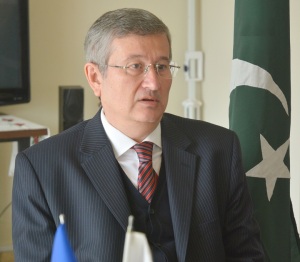 ISLAMABAD, Pakistan: Ambassador of Ukraine to Pakistan Markian Chuchuk has said that as of 28 February, 352 civilians including 16 children have been killed and thousands were wounded in the Russian invasion of Ukraine adding the figures about civilian and military losses are updating every few hours.

Ambassador Chuchuk expressed these views in a media briefing on Tuesday, DNA reported.

He further said the residential areas of the Ukrainian largest city of Kharkiv were directly shelled by Russian rocket artillery, with dozens of new victims. Russian troops have destroyed kindergartens and orphanages, thus committing war crimes and violating the Rome Statute.

Hospitals and mobile medical aid brigades are also targeted by the Russian shellfire and the sabotage groups. Ukraine has submitted an application against Russia to the International Court of Justice.

Russia uses its best military units to attack Ukraine, but has achieved none of its key goals, he added.

According to international reports, about half a million of refuges have already left Ukraine. The U.N. estimates this number could grow to 5 million. Russian military aggression threatens thousands of foreigners who are staying in Ukraine.

‘We regret that while they had been warmly welcomed in our country, nowadays Russian invasion put their lives at high risk. We understand the will of foreign citizens to leave the territory of Ukraine for a safer place and we are providing all possible assistance at the border as we do for our citizens’.

We do remember in Ukraine sincere support of Pakistan for evacuating Ukrainian citizens from Afghanistan in August 2021. The Ukrainian government does its best to ensure safe and smooth evacuation of Pakistani students.

Our Foreign Ministry has requested the relevant agencies of Ukraine to step up support to all foreign citizens wishing to return to their home countries or move to the third countries.

Temporary volunteer assistance points have been set up at the border to provide foreign students with food, cater and other humanitarian needs. Ukrainian and Pakistani foreign ministers remain in touch in resolution of this issue, the ambassador added.

‘In the final part of my briefing let me say a few words about geopolitics which is not welcomed in some countries of the world, but is an icon in some others. Russian invasion into Ukraine has initiated a watershed moment in global politics and architecture of global security’.

Ambassador Chuchuk said the red line is clear: which values people and states consider important enough to fight for them? I believe that human lives and freedom are much more important values than any geopolitical concepts like bipolarity or multi-polarity. Disregarding what geopolitical camp an international actor prefers, it cannot justify unprovoked massive war and killings of civilian population by ballistic and cruise missiles or vacuum bombs.

Otherwise the global security architecture will collapse and the new world war would become inevitable.  On the other hand, if somebody condemns Russian aggression against Ukraine it does not mean automatically support of Pax Americana or NATO. It means respect to human live and freedom, commitment to peace and rule based order in international relations. And that is that.

Its time for everyone to make a choice. We have seen a choice of the USA and its close allies. Last weekend we have seen a choice of Europe.  It was really tectonic shift in Europe’s approach to Russia and Ukraine. The EU has imposed a number of heavy sanctions and restrictions against the aggressor while provided more assistance and weapons to Ukraine.

Ukrainian President Volodymyr Zelenskiy has called on the EU to grant Ukraine membership under a special procedure immediately and signed an application for Ukraine’s membership in the EU.

President Zelenskiy said: “Europeans are witnessing how our soldiers are fighting, not only for our country, but for all of Europe… for peace, for all the countries of the European Union… Our goal is to be with all Europeans… I am sure we deserve it”. We will see a choice of the world at the ongoing session of the United Nations General Assembly session.

Ambassador said Ukraine was grateful for powerful international support provided by the G-7 states, the EU and many other countries which have joined an anti-war global coalition.  ‘We urge the international community to continue express solidarity with Ukraine and contribute in stopping the war by practical measures, which might include:

– stopping Russian propaganda of war in every country of the world- the immediate imposing of massive sanctions against Russia.- Russia’s isolation and exclusion from  the international fora.- the introduction of a full-flagged trade embargo on Russia.- further closure of airspace for Russian aircrafts and ports for Russian vessels.- supporting Ukraine with finance, weapons, protective equipment, ammunition, fuel, and whatever else necessary to counter the biggest army in the continent’.

We hope that one day Pakistan will also do some steps in that direction, the ambassador concluded.