What we know about Protection of Mother of God, Day of Defender of Ukraine and Day of the Ukrainian Cossacks

The day of October 14 is one of the most popular and important national celebrations in Ukraine. On this day, Ukraine celebrates the Protection of Mother of God (Pokrova), the Day of Defender of Ukraine, and the Day of the Ukrainian Cossacks.

This festivity is defined as “considering historical meaning and achievements of Cossacks in establishing of Ukrainian statehood and essential contribution in the modern process of state-building.”

If you know the history of the Cossacks, you will easily understand why Ukrainians, who seem quiet and humble at first sight, can go to protest on Maidan and become courageous warriors.

Zaporozhian Sich Cossacks built a church in honor of the Pokrova of Virgin Mary with her icon.

The Ukrainian Cossack has come to symbolize Ukraine’s ethnic image. In fact, only a minority of Ukrainians belonged to this famed social group – but their influence on history, culture, and the psychology of the country was deeply profound. If you know the history of the Cossacks, you will easily understand why Ukrainians, who seem quiet and humble at first sight, can go to protest on Maidan and become courageous warriors.

The name Cossack (Ukrainian: козак; Kozak) is derived from the Turkic Kazak (free man), meaning anyone who could not find his appropriate place in society and went into the steppes, where he acknowledged no authority.

The Cossacks period – is one of the heroic and most glorious pages of centuries-old Ukrainian history. For more than two hundred years – from the middle of the XVI century and up to the last quarter of the XVIII century – the Cossacks were the driving force of Ukraine’s progress, engraved a trace in its liberation struggle, state-building, cultural progress and protection of the nation. 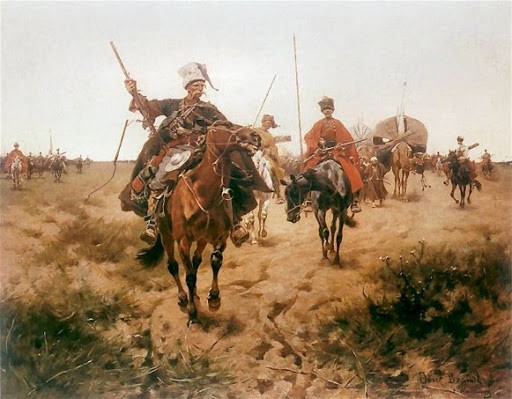 The Ukrainian Cossacks, as a special free military union, were formed from all classes and strata of the society of that time, first of all the peasantry, whose rights and freedoms were encroached upon by the Polish nobility, so they absorbed freedom-loving traits of Ukrainian national character.

Having formed their Cossack Christian republic at the bottom of the Dnieper, beyond the thresholds, the Cossacks considered their main task to fight Turkish-Tatar aggression. Later, since the end of the XVI century, Cossacks led the peasant uprisings and long wars against Polish-noble rule in Ukraine, which finely came to the People’s Liberation War of 1648-1654 under the leadership of Hetman Bohdan Khmelnytsky. Since 1654, when Ukraine recognized the authority of the Muscovite tsar (Pereiaslav Treaty of 1654), the principal political problem of the Cossacks, and particularly their leaders, became the defense of the autonomous rights of Ukraine from the encroachment of Russian centralism.

In the people’s memory, the Cossack became a symbol of Ukraine

The Cossacks were destroyed by Russian tsarism, also Russian Empire provided the conquest of Crimea and the colonization of southern Ukraine. Still, heroic epic and historical songs preserved and poetized the best milestones in the history of the Cossacks glorified many leaders, assessed its patriotic sentiments, fighting spirit, courage, high moral qualities, colorful everyday life. In the people’s memory, the Cossack became a symbol of Ukraine, its strong intention for freedom first of all. Certain Ukrainian noble families retained their national Cossack traditions, and many of their members took part in the Ukrainian independence movement and rebirth in the 20th century. Many members of the new Ukrainian intelligentsia and other social strata are descendants of the Cossacks.

A Cossack – is a national hero who represents the Ukrainian mentality and the Ukrainian soul. Deeply this image has not yet been traced to the end, not understood all its grandeur and fullness. At its core – the Cossack knew how to fight, he was ready to die for the Motherland and native land, but he also knew how to enjoy life and present a beautiful nature of Ukrainian culture by different ways – songs, dances, military exercises, national costumes and specific hear-dress!

Putin and Macron stressed the diplomatic solution of Ukraine’s standoff