LAHORE, Pakistan: Chris Gayle, Chris Lynn, Rashid Khan, and Dale Steyn are some of the leading foreign players who have made themselves available for the sixth edition of HBL Pakistan Super League (PSL).

The quartet is part of a 25-player Platinum roster of foreign players ahead of the HBL PSL Player Draft that will be held in Lahore on January 10.

The six franchises will now be making key trade and retention decisions before the Draft, with each team allowed a maximum of eight retentions ahead of the Draft.

With a packed international calendar during the February – March window this year, some of the foreign players will only be partially available for the competition. 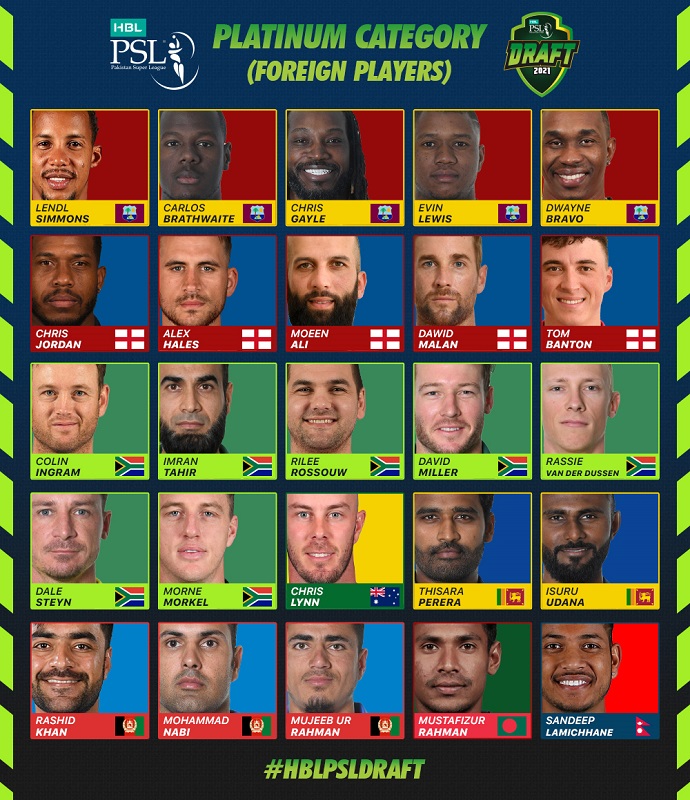 The ICC T20I Player of the Decade Rashid Khan will be one of the major attractions of the Draft; the Afghanistan leg-spinner has bagged a total of 338 wickets in 244 T20 games besides his staggering T20I numbers of 89 wickets in 48 matches.

South African batsman David Miller, a veteran of 320 T20 matches, will be one of the most sought after players for the franchises. Miller is yet to feature in the HBL PSL.

West Indian T20 legend Chris Gayle who has represented Karachi Kings and Lahore Qalandars in earlier HBL PSL editions is another major attraction on the list along with the number one ranked ICC T20I Batsman Dawid Malan who was part of the Islamabad United squad in HBL PSL 2020.

Australian Chris Lynn who scored 284 runs at 40.57 (strike-rate 179.74) for Qalandars last season is also part of the Platinum list and could be a possible retention option for the Qalandars ahead of the Draft.

The West Indian representation on the Platinum list also includes Dwayne Bravo who has represented Lahore Qalandars, Peshawar Zalmi, and Quetta Gladiators in the HBL PSL along with Carlos Brathwaite (stints with Qalandars and Zalmi), Lendl Simmons (Kings and Zalmi), and Evin Lewis.

Besides Malan, England’s Alex Hales who was part of the Kings’ winning squad in last year’s edition is also in the list. Moeen Ali (Sultans), Chris Jordan (Zalmi and Kings) and Tom Banton (Zalmi) are also part of the Platinum roster.

Spinner Mujeeb-ur-Rehman and all-rounder Mohammad Nabi (Gladiators) are the two other Afghanistan players on the list along with Rashid.

Bangladesh fast bowler Mustafizur Rahman and Nepal’s Sandeep Lamichanne who have both played for Qalandars in the past complete the list.

The Director Commercial Babar Hamid said, “We are delighted to release a star-studded list of players in the Platinum category even though we are dealing with an unprecedented situation due to Covid-19 and player availabilities are also hampered by a packed FTP calendar.

“The HBL Pakistan Super League 2021 will be another exciting season once again being played in Pakistan. The quality of players on the list is a further testament of the credibility and integrity of the league as it continues to attract the best T20 talent from around the world.

“In the coming days, we will work as hard as ever on the successful delivery of the event with all stakeholders as we are determined and focused on producing another world-class event while raising the bar higher and ensuring the safety and security of all participants.”

Mati
Mati-Ullah is the Online Editor For DND. He is the real man to handle the team around the Country and get news from them and provide to you instantly.
Share
Facebook
Twitter
Pinterest
WhatsApp
Previous articleShehryar Afridi calls for trying India for criminally misleading world opinion
Next articleRed Bull Homerun snowboards into Pakistan