Speaking at a research launch event for the Center of Research and Security Studies (CRSS) in Islamabad on Monday, Dr Sadiq stated that a range of factors have rendered the FIR in Pakistan a complex phenomenon and a constant battleground for social and legal wrangling.

The event centered around the launch of four research publications that look at national security in Pakistan from a variety of socio-economic and cultural perspectives.

Dr Sadiq also reviewed the legal framework, relating to the registration of an FIR, explained reasons for non-registration and remedies available in case of non-registration. Finally, he shared the past efforts to resolve this issue and evaluated their impact and implementation. 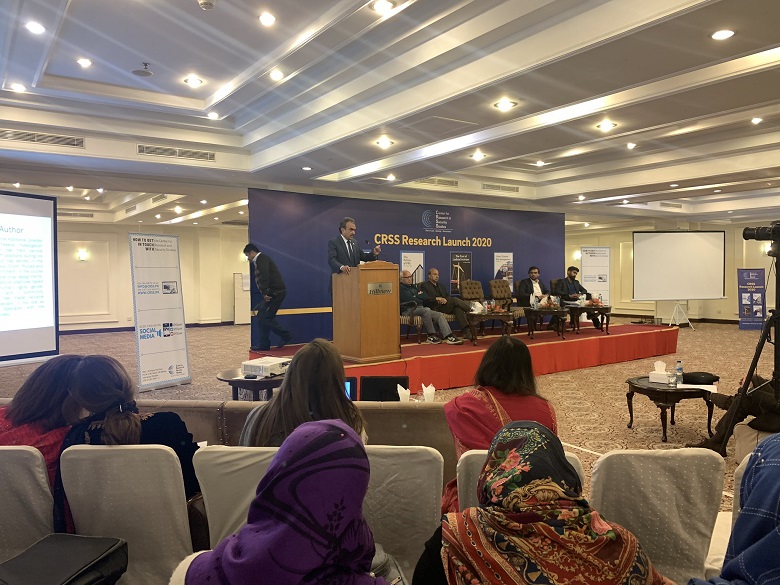 The Executive Director CRSS Imtiaz Gul stated that empirical research forms the basis of all programmatic endeavors, and should be the go-to resource for any and all formal policy interventions.

The CRSS Annual Security Report 2019, authored by Muhammad Nafees and Zeeshan Salahuddin stated that there were no drone strikes in the Country in 2019, a first since 2004. Consolidating its position in its fight against terror, this year Pakistan observed 30.71% drop in terrorism, reducing from 980 fatalities in 2018 to 679 in 2019.

Talha Ali Madni shared some shocking ramifications of unnecessary judicial activism in Pakistan. He stated that the total cost of just four instances is Rs 9.9 trillion including Rs 1,244 billion in penalties and losses, and Rs 8,505 billion in loss of opportunity.

Finally, Arslan Alvie apprised the audience that South Asian countries still rely on responsive approach rather than proactive, as a common proactive in the developed countries. Karachi, being the biggest city in Pakistan, contributes 20% to Pakistan’s GDP and controls about 80% of Pakistan’s import. If struck by a natural disaster, this would wreak havoc on Pakistan’s economy.

This was the first research launch event by CRSS of 2020. The next call for papers will be announced later in the week, and the second launch event will be conducted in May, featuring brand new research into the security landscape of Pakistan.

Mati
Mati-Ullah is the Online Editor For DND. He is the real man to handle the team around the Country and get news from them and provide to you instantly.
Share
Facebook
Twitter
Pinterest
WhatsApp
Previous articleRs 4.47 billion spent on foreign tours of Presidents and PMs from 2008 to 2018
Next articleCan Carob Save a Nation?