Holding a telephonic conversation with the Foreign Minister Shah Mahmood Qureshi on Friday, Wang Yi briefed him about the regional situation.

The Chinese State Councilor lauded Pakistan’s sincere and relentless efforts to promote peace and stability in the region and thanked Pakistan for the support it has extended to China during difficult and challenging times.

Shah Mahmood Qureshi underlined that BRI and CPEC would become the hub of trade and economic activity, sustainable development, and greater people-to-people exchanges.

The foreign minister said that Pakistan and China were taking relevant measures that will help timely completion of CPEC projects.

Qureshi underscored that Pakistan and China are ‘All-Weather Strategic Cooperative Partners’ and had preserved the fine tradition of expressing solidarity, mutual assistance, and mutual support to each other in the face of common challenges.

The minister reiterated that Pakistan remains committed to the ‘One-China policy’ and firmly supports China on its core interests including Hong Kong, Taiwan, Tibet, and Xinjiang. 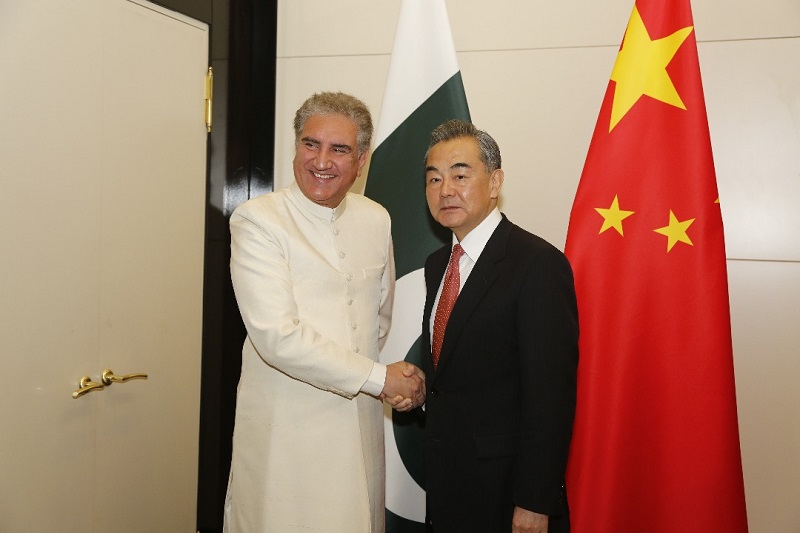 The foreign minister underscored that the regional security situation was deteriorating and underlined that India’s belligerent posture and expansionist policies were imperiling peace in the region.

Apart from committing egregious violations of human rights in Indian Occupied Jammu and Kashmir (IOJ&K), India was seeking to change the demographic structure of the occupied territory, Qureshi said.

The foreign minister also briefed about the repeated violations committed by India across the Line of Control (LoC) as well as targeted killing of the civilians.

In the face of Indian provocations, Pakistan was exercising restraint, he added.

In addition, the minister underscored that disputes in the region should be resolved through peaceful means and agreed mechanisms rather than resorting to unilateral, illegal and coercive measures reflected in India’s decision of August 5, 2019.

Qureshi emphasized that the recent attack at Pakistan Stock Exchange (PSX) in Karachi was supported by anti-Pakistan elements seeking to undermine Pakistan’s economic development and stability.

During the conversation, both sides also reaffirmed their resolve to support each other at the multilateral institutions and hoped that those institutions would foster a spirit of objectivity and coherence in advancing their goals.

The two foreign ministers expressed determination to promote peace and development in Afghanistan.

It was hoped that the next meeting of China-Afghanistan-Pakistan Trilateral Foreign Ministers Dialogue will take place at the earliest to facilitate peace and reconciliation efforts in Afghanistan.

Both sides reaffirmed the resolve to take measures aimed at the earliest possible economic recovery in the aftermath of COVID-19.

The Chinese State Councilor Wang Yi emphasized that in the aftermath of COVID-19, Beijing was taking swift, practical, and demonstrable measures to promote economic recovery in the region.

Wang Yi thanked Pakistan for supporting Beijing’s idea of ‘Health Silk Road’ which, he believed, would play a major role in addressing the region’s social and economic needs.

Both sides resolved to implement the consensus reached by the leadership of the two countries to deepen strategic consultation and coordination at all levels so as to collectively promote shared goals of peace and stability.

They decided to have a face-to-face meeting soon to discuss challenges confronted by the region.