By Central Desk
May 22, 2018
Share
Facebook
Twitter
Pinterest
WhatsApp
Islamabad, Pakistan: “CPEC unites Federation of Pakistan, complete consensus among political parties on friendship with China”.
This was said by Senator Mushahid Hussain Sayed at the conclusion session of substantive dialogue held here on Tuesday which was attended by members of Foreign Affairs Committee of the Chinese People’s Political Consultative Conference (CPPCC).
The meeting was held in the Parliament House and attended by the Ambassador of China to Pakistan, H.E. Yao Jing as well as the Director General (China), Ministry of Foreign Affairs, Ms. Ayesha Ali.
Warmly welcoming the Chinese delegation, Senator Mushahid Hussain said that Pakistan and China have a strategic relationship based on a track record of supporting each other on their respective “core interests”.  He said that the China Pakistan Economic Corridor (CPEC) was today the centerpiece of Pakistan-China friendship and he lauded the Belt and Road initiative of President Xi Jinping as the biggest diplomatic and developmental initiative of 21st century.  He said that a unique feature of Pakistan China friendship was that all political forces, the government and parliament, the armed forces and civil society were united on this one issue that this relationship was the most vital component of Pakistan’s foreign policy since it serves the national interests of Pakistan.  He said the balance of economic and political power is shifting from the West to the East and China is a pillar of the Asian Century
The Chinese delegation led by Mr. Kong Quan, said that they all feel at home on coming to Pakistan and the Chinese government and people as well as the parliament strongly support Pakistan in their efforts to protect its independence and build a strong economy relying on their talented manpower.  He said that China would continue to support CPEC including strengthen cooperation with the youth as well as strengthen Pakistan’s industrial and manufacturing base.  He also urged the need for parliamentary diplomacy between the parliamentarians of Pakistan and China. 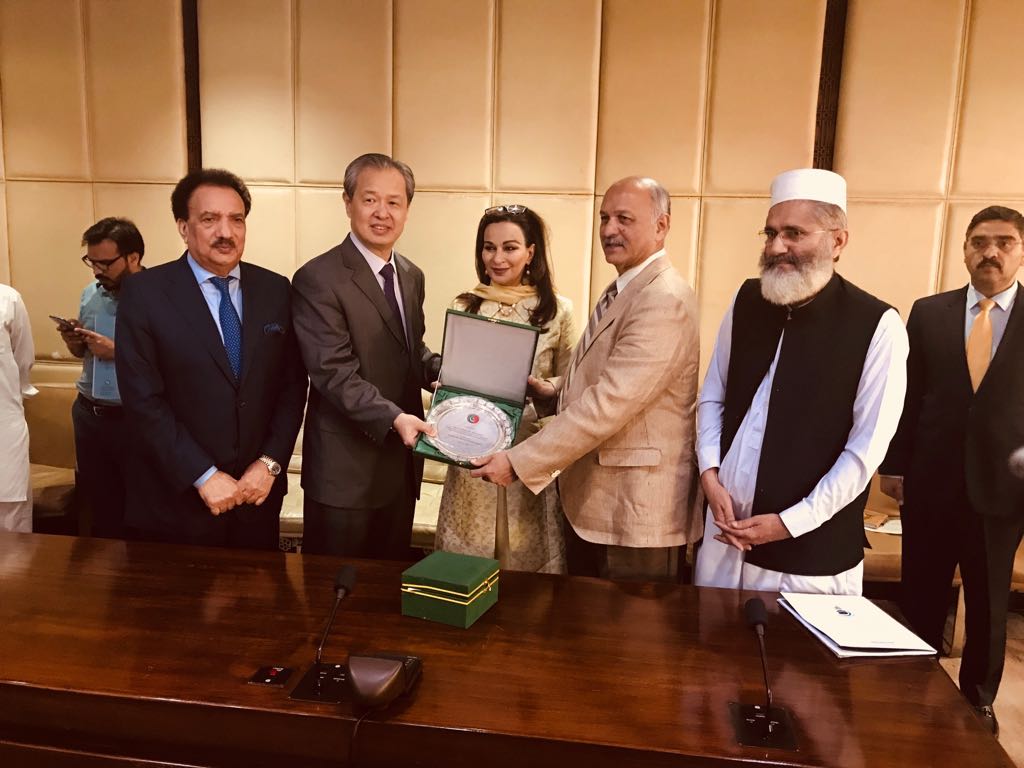 There was a very positive interactive discussion between the parliamentarians of both sides who represented the media, diplomacy and the business sectors.  From the Pakistan side, active interventions were made by Senator Sherry Rehman, Leader of Opposition, who urged a greater role for youth in CPEC and leveraging the relationship strategically,  Senator Nuzhat Sadiq, who spoke of women’s participation, Senator Mian Ateeq sho urged the need for closer business interaction between the two countries’ business to business relations, plus the need for technology transfer, Senator Anwarul Haq Kakar, urged the need for youth of Balochistan to get dividends from CPEC and he said that 99% of the people of Balochistan support CPEC, Senator Rehman Malik talked of security and cooperation between Pakistan and China, while Senator Sirajul Haq urged that the benefits of CPEC should reach the common man and he also underlined the need for small and medium enterprises to benefit from CPEC.
At the end of the meeting, the visiting Chinese delegation leader invited Senator Mushahid Hussain and the Foreign Affairs Committee to visit China on the invitation of CPPCC and Senator Mushahid Hussain presented souvenirs to the Chinese delegation.  The meeting was attended by Senators Sherry Rehman, Rehman Malik, Sirajul Haq, Mian Ateeq Sheikh, Nuzhat Sadiq, Anwarul Haq Kakar and Secretary of the Committee, Dr. Syed Pervaiz Abbas.
Advertisement