Since a long war was fought against terrorism and we all know the international powers behind it and their focus is to destabilize Pakistan. They know this is the only Muslim country proud to be a nuclear power and have a very disciplined army and the Pakistan army always provides opportunities from all corners of Pakistan to join this one of the greatest institutes.

Since the foreign-funded groups are detracted by the foreign funding but still are Pakistanis one day they will understand without the identity of Pakistani they would have been always without identity, I hope one day they will realize it and will join the mainstream of Pakistan only being  Pakistanis, our peacekeeping forces have fought a big war against terrorism and many soldiers and officers who have sacrificed their lives only for their country and always kept the morale of the nation high and have passed an image to the rest of the world that patriotism and commitment is the only reason behind this success of the war against terrorism.

I want to mention these soldiers did not fight only to protect the boundaries of Pakistan but also played a very greater role in the economic stability of Pakistan. I want to mention the success of CPEC which is actually a financial game changer for Pakistan this is never possible without the proper support of law enforcement agencies. When the enemies tried to destabilize the peace of Pakistan which ultimately affects the financial stability we as a nation need to be united and keep our morale high. There was a time when the sleeping cells of the enemies were detracting some small groups and it was a huge pressure on our internal security it was decided by the leaders of armed forces to come forward and hold the flag of peace unity and discipline to keep the process going to continue   CPEC.

The major role is not only by the economist but our real heroes who have successfully defeated terrorism and we can say not only this they have even defeated the roots of terrorism. Pakistan army has established many cadet schools in many areas to ensure peace, I want to appreciate the efforts of the armed forces to establish the cadet colleges such as Dera Bugti Kohlo Ormara Kharan and Gawadar. This generated a big opportunity for the locals to join the efforts for a peaceful Pakistan that could be the next Asian economic tiger.

As I come back my basic topic is that our armed forces is sacrificed their precious lives the reason is to keep peace and stability, Many soldiers and officers are really martyrs and heroes of our nation.  As a nation, we should salute them so that we can sleep with peace of mind. We all know and  I need to name it again India never wants CPEC to run smoothly.

They are doing all efforts to sabotage this project, as they know that financial stability in Pakistan will strengthen its power in the region. As a coordinator for the silk route planning, I can feel how important is this project which will generate billions of dollars in revenue for Pakistan just by the transit trade. Whenever it is said it is a game-changer project actually it is true. Our financial advisors know very well that if the CPEC will complete we could be in a position to generate foreign exchange by using local resources.

Gwadar is considered to be the world’s second natural deepest port in the world where a mother ship can directly be docked. And when the project will start it will change the economy of all of Pakistan and the entire region. CPEC is called a flagship project of the One Belt One Road initiative in Pakistan most people are not well aware of this project or how important is this project for Pakistan. I can assure you that economic stability will bring a big change to Pakistan society and could be very helpful to end the wave of terrorism which is mostly supported by Pakistan’s enemies.

There is a plan under CPEC to bring an opportunity for special economic zones for local investors as well as for overseas investors. Keeping in mind that we have a friendly county like China which really wants Pakistan to step on its feet so that we can go for self-reliance. There are a total of 52 special economic zones that have been declared and the Pakistan government is working to expedite infrastructure for these projects. This could have helped the problem of unemployment and also could raise the living standards of local people.

What the Pakistan government and private sector should focus on is the second phase of  CPEC we need to find out the manufacturing of products by using local resources. With the completion of CPEC, we would be able to generate almost one point 5 million direct and indirect jobs.

Do we need to understand that it would not only bring Chinese investment to Pakistan but I am sure many other countries will also join it with time especially the access of Gawadar and its location will convert it into the center of financial activities? Since Saudi Arabia is planning to develop one of Asia’s biggest oil refineries and it is reported that almost 50% of the processed oil would be available to export and it would be invested with a capital of 12 billion dollars.

It is reported that the world has 70 percent of oil travel in and out of the Persian Gulf, and the geographical position of Gwadar makes it very accessible to the Middle East Africa, and Europe and converting Pakistan into a center of financial activities. Our major exports are still depending on raw materials but how we can convert the local resources into finished products, We have not established the proper research centers for our local products, here  I can identify many areas where we can upgrade and preserve our products to make it more valuable to the international market. As a goodwill ambassador for the silk route, I can understand the importance of this project. I hope that financial think tanks such as chambers and the federation of commerce can develop a platform to determine the possibility to enhance the exports of Pakistan

To end up my column I again want to salute the armed forces who made this all possible with their sacrifices and ability to bring peace to Pakistan. 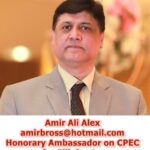 Note: Educated in China, Amir Ali is an expert in Pak-China economic relations and gives lectures to businesses for their connectivity with Chinese counterparts.