COVID-19: Misinformation as lethal as lack of information: Speakers

CoronavirusCOVID-19: Misinformation as lethal as lack of information: Speakers
Coronavirus
By Mati
April 9, 2020

ISLAMABAD, Pakistan: The Afghan Studies Center (ACS) goes virtual with its first-ever online dialogue on the theme “Impact of COVID-19 on Pakistan and Afghanistan and the Role of Youth”.

Over 20 participants from different parts of Pakistan and Afghanistan and two from the United Kingdom joined the session to discuss the subject theme and put forward their recommendations in this regard.

Youth from both the sides were of the view that we have to look after each other as there is no longer a “me” and a “you”. There is only us. The young lot needs to be determined and committed. We can defeat this virus by banding together and taking it seriously. We have to come up with ideas to help raise awareness. Youth really has to come together to contribute solutions to this problem, and we must convince our peers to do the same, instead of creating additional issues, remarked participants from both countries. 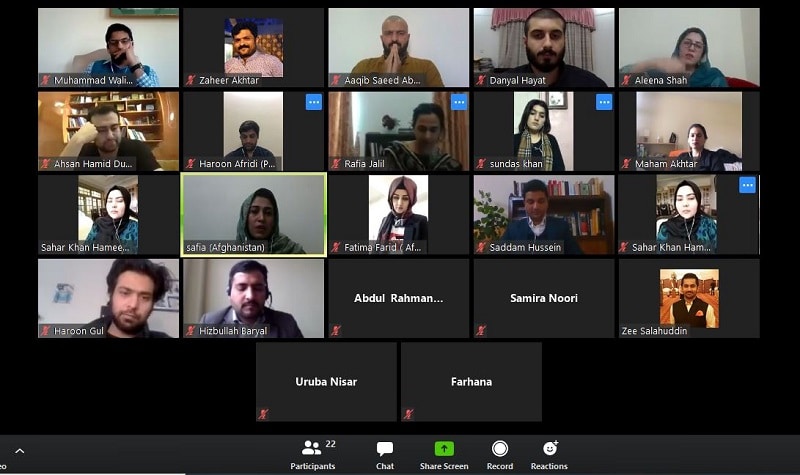 Hizbullah Baryal from Afghanistan stated that modern solutions are needed for education in Afghanistan – a sector deeply impacted by this global crisis. Perhaps it is time to use this as an opportunity to revamp our educational systems. Adding to this Ahsan Hamid Durrani from Pakistan said that as we implement online solutions, we need to be mindful that the availability of the internet is not uniform for all students in both countries.

The education system needs to come up with alternative ideas as well, instead of just sticking to virtual education prototype. Danyal Hayat from CECOS University Peshawar, while sharing employment side of the COVID 19 impact, stated that at least half a million textile and garment industry workers had been dismissed in Punjab province alone. 12.3 million and 18.5 million people in various sectors may lose their jobs. A lack of written labor contracts, inadequate legal protections, and poor enforcement of labor laws and regulations could heighten the problems during this crisis.

Aleena Shah, President Youth General Assembly (YGA) Pakistan and Safia Ibrahimkhel from Afghanistan opined that the biggest problem right now is misinformation. Disseminating the right information is crucial. Misinformation has as much of a negative impact as lack of information the generation of fake news, fake media, and Whatsapp universities is deeply detrimental. We must actively work to stop the spread of misinformation. Youth must think critically and analyze the stuff critical they get from print, electronic of social media before passing them on.

Rafia Jalil and Sundus Khan were concerned about the rise of domestic violence and anxiety due to the lockdown and this must be addressed through proper counselling online. Plus, the issue of depression resulting from this extended isolation must be also addressed. It is not even talked about in Pakistan, they pointed out. Maham Akhtar who joined all the way from Manchester, UK, apprised the participants that people in the UK are more concerned with their social life. They have no idea of the pain daily wage workers in developing currently face. In general, the western countries are suffering from a privilege problem instead of real problems in developing or underdeveloped countries.

Towards the end of the session, participants suggested that the youth must carry out philanthropy on an individual level. They have to start initiating what they can do on their own, without being prompted to do something. Simple steps such as helping out our immediate neighbors are enough. Anything that can help, will help. Just start doing it. The research community has the biggest chance to grow in the current situation, so young researchers can do research in their respective domains regarding the impact of COVID-19 pandemic. The government ought to promote educational programs through television/radio in areas without internet access.

All nations/states have to have a collective approach, as cooperation, not competition is the future if humankind has to survive, urged the youth representatives from Pakistan and Afghanistan.

Afghan Studies Center is a youth organization based in Islamabad. As part of its objectives to improve the people to people contact between the two countries, it has conducted 27 Pak-Afghan youth dialogues and 15 training workshops since April 2017. This is the first virtual dialogue held between the youth from both countries due to the outbreak of Covid-19 which has forced people to stay indoors and put a halt to physical meetings and gatherings.