His visit can inarguably be deemed as the most unprecedented visit by a foreign dignitary to Pakistan as not merely Saudis inked US $20 billion worth agreements and Memorandums of Understandings (MoUs) including a US $10 billion deal of establishing an oil refinery in Gwadar with Pakistan but also in a prompt and most gracious gesture to Prime Minister Imran Khan’s compassionate request, the Crown Prince ordered the immediate release of 2,107 Pakistanis languishing in Saudi jails.

“Consider me Pakistan’s ambassador in Saudi Arabia,” His Royal Highness promptly remarked after the prime minister’s requests to him at the reception dinner arranged in his honour at Prime Minister House just after he arrived in Islamabad on Sunday evening.

Crown Prince Mohammad bin Salman won the hearts of the people of Pakistan when he said “consider me Pakistan’s ambassador to Saudi Arabia” in response to my asking him to treat the 2.5 mn Pakistani’s working in KSA as his own.#CrownPrinceinPakistan pic.twitter.com/Xr0E2EWKrK

Earlier the Crown Prince while addressing the reception dinner also said US $20 billion investment by Saudi Arabia in Pakistan just marked the end of the first phase. He said Saudi Arabia would invest further in Pakistan in the future.

“We believe that Pakistan is going to be a very, very important country in the coming future and we want to be sure we are part of that,” the Crown Prince remarked.

“We were waiting for that kind of a leadership to partner with and build a lot of things together,” Mohammad Bin Salman said turning towards Prime Minister Imran Khan. 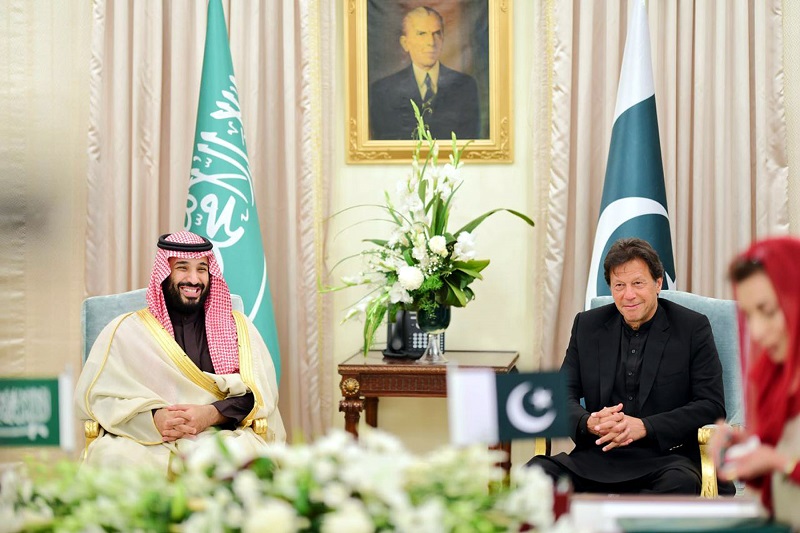 Separately addressing a Joint News Conference along with his Pakistani Counterpart Shah Mahmood Qureshi in Islamabad on Monday, the Saudi Minister of State for Foreign Affairs Adel al-Jubeir also said Saudi Arabia wanted to participate in Pakistan’s economic growth and share the vision of Prime Minister Imran Khan to take his Country to new heights.

Adel al-Jubeir said their investment in Pakistan was not charity and it was for mutual benefit of both the Countries and their people.

“We want to see Pakistan as an economically stable and viable Country,” Adel al-Jubeir remarked.

Meanwhile, the Saudi Crown Prince Mohammad bin Salman was conferred upon Pakistan’s Highest Civilian Award “Nishan-e-Pakistan” at an Impressive Investiture Ceremony at the President House on Monday following a one-on-one meeting between him and President Dr. Arif Alvi.

Prime Minister Imran Khan was also present at the ceremony.

Afterwards, a luncheon ceremony was held in honor of the Saudi Crown Prince Mohammad bin Salman at the Presidency.

In his remarks at the luncheon, the Crown Prince said it was a very golden era for Pakistan as it was open for investment.

President Dr. Arif Alvi said the visit of His Royal Highness would further strengthen Pakistan-Saudi Arabia friendship. He said Saudi Arabia and Pakistan were best Countries for tourism; Pakistan had many opportunities for tourism.

The Saudi Crown Prince earlier also held a meeting Prime Minister Imran Khan in which both the leaders vowed for further strengthening of friendship and more economic cooperation between Pakistan and Saudi Arabia.

Later the two leaders also co-chaired the inaugural session of the Saudi-Pakistan Supreme Coordination Council (SCC) formed to ensure structured institutionalized mechanism with regard to the implementation of MoUs.

The Crown Prince also met the Chief of Army Staff (COAS) General Qamar Javed Bajwa, and discussed the ongoing cooperation between Pakistan and Saudi Arabia in the fields of defense.

In addition, he also held a meeting with a Pakistani Parliamentary delegation and discussed issues pertaining to the promotion of bilateral parliamentary contacts between Pakistan and Saudi Arabia.

On his sidelines of Crown Prince’s visit, various meetings between the visiting Saudi dignitaries and Pakistani ministers also took place.

The Chairman of the Saudi Company ACWA Power International Mohammad A. Abunayyan met Pakistani Finance Minister Asad Umar, and expressed his Company’s willingness to invest around US $4 billion in Pakistan’s renewable energy sector.

The Saudi Minister for Energy, Industries and Mineral Resources Khalid Al-Falih along with his delegation also met Asad Umar in Islamabad.

Mati
Mati-Ullah is the Online Editor For DND. He is the real man to handle the team around the Country and get news from them and provide to you instantly.
Share
Facebook
Twitter
Pinterest
WhatsApp
Previous article
Huawei Showers its Love in Pakistan with a Coral Red Edition of HUAWEI Y7 Prime 2019
Next article
Joint Statement on visit of His Royal Highness Saudi Crown Prince Mohammad Bin Salman to Pakistan
Share
Facebook
Twitter
Pinterest
WhatsApp