BERLIN, Germany: The Transparency International has released the “Corruption Perceptions Index 2019” which reveals that corruption has increased in Pakistan, certainly enough to raise eyebrows as the dipping ranking contradicts the ruling Pakistan Tehreek-e-Insaf’s (PTI) claims of dealing with malpractices with iron hand.

The Corruption Perceptions Index (CPI) 2019 ranks 180 Countries and Territories by their perceived levels of public sector corruption, according to experts and business people.

The Index uses a scale of zero to 100 where zero is highly corrupt and 100 is very clean. 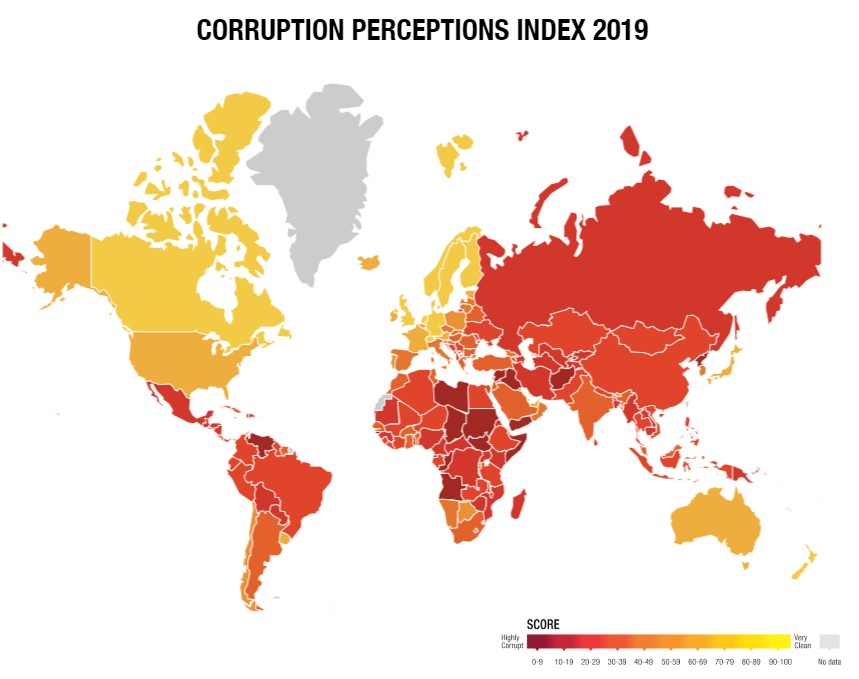 The Index has revealed that Pakistan’s CPI Score remained 32, putting it at 120th place among 180 Countries whereas neighboring India’s CPI Score has been recorded as 41, Afghanistan’s 16, Bangladesh’s 26, and Iran’s 28.

As per the CPI Ranking 2019, Denmark and New Zealand stand atop with 87 points each followed by Finland with 86 points, and Singapore, Switzerland and Sweden with 85 points each.

Whereas the highly Corrupt Countries were ranked as Somalia with 9 points, Sudan with 12 points, Syria with 13 points, Yemen with 15 points, and Venezuela, Sudan, Equatorial Guinea, Afghanistan with 16 points each.

The data shows that despite some progress, a majority of Countries are still failing to tackle public sector corruption effectively.

“Governments must urgently address the corrupting role of big money in political party financing and the undue influence it exerts on our political systems,” the Transparency International Chairperson Delia Ferreira Rubio said.

Imran Khan-led PTI rose to the Centre in Pakistan in August 2018 with the prime objective of purging the Country of corruption; however, its endeavors haven’t yet bore any fruits despite initiating an extensive crackdown against corrupt elements.

Mati
Mati-Ullah is the Online Editor For DND. He is the real man to handle the team around the Country and get news from them and provide to you instantly.
Share
Facebook
Twitter
Pinterest
WhatsApp
Previous articlePakistan conducts successful training launch of ballistic missile Ghaznavi
Next articleMushaal urges US to press India to sort out Kashmir issue