Coronavirus threat: Section 144 imposed in Balochistan for one month

QUETTA, Pakistan: The Balochistan government has imposed Section 144 across the province for a period of one month, banning the gathering of 10 or more persons.

The step has been taken by the Balochistan government amid fear among the general public that the fast-spreading Coronavirus Pandemic is likely to infect them as well.

“The Government of Balochistan, in exercise of powers conferred under Sub-Section (6) of Section 144 Cr.P.C 1989, is pleased to impose ban on gathering of ten or more than ten persons, sit-in and procession/rallies at public places, markets, hotels/restaurants and on wedding/walimas, parties sports gathering, cinemas, educational gatherings, conferences, seminars in Balochistan Province with immediate effect for a period of one months,” said the notification issued by the Home and Tribal Affairs Department of the Government of Balochistan. 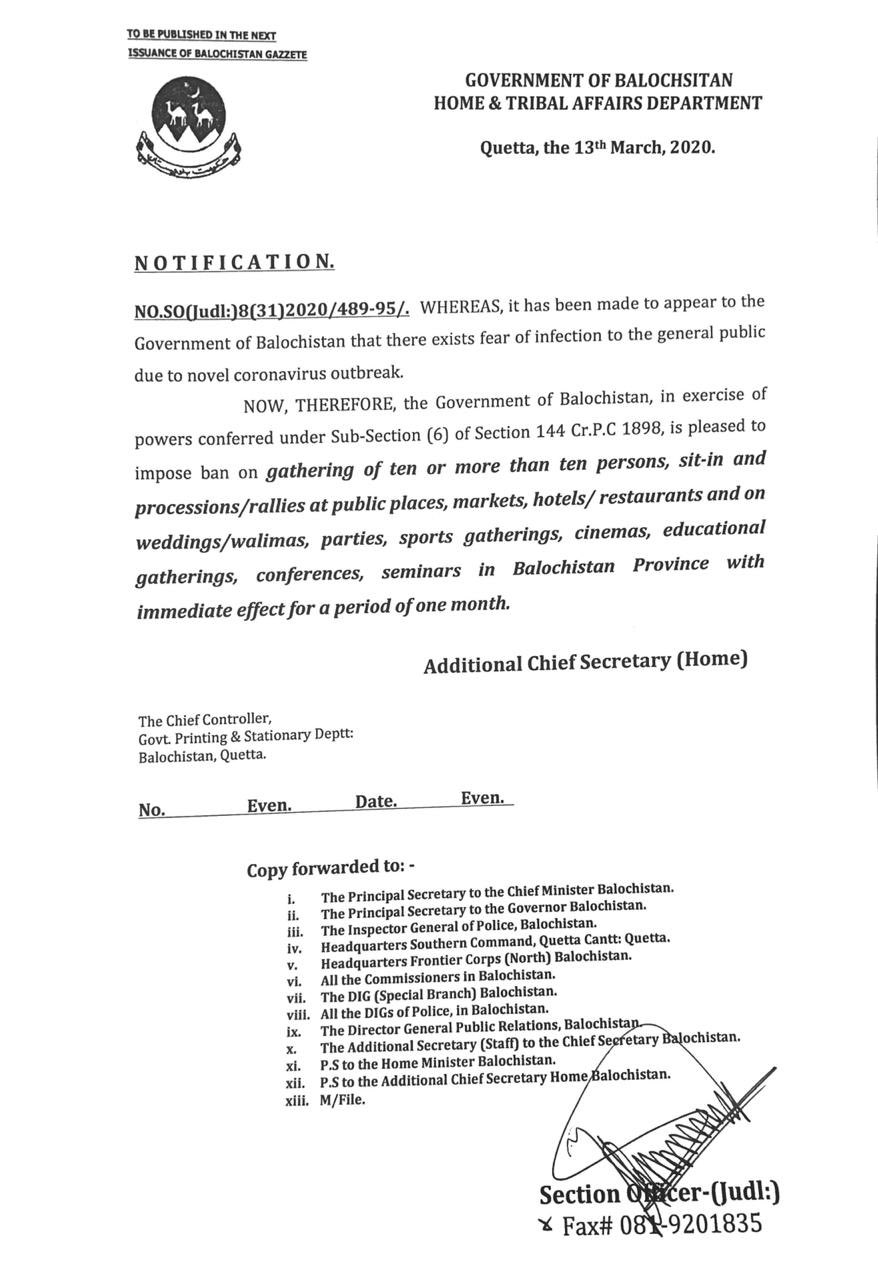 Meanwhile, the Balochistan government also issued an advisory related to precautionary measures to prevent the spread of Coronavirus in the province.

According to the advisory, no body except government employees would be allowed to enter the Civil Secretariat in Quetta. Similarly, no one will be allowed to jails across the province.

Earlier on Thursday, the provincial government announced to extend the holidays in all educational institutions in Balochistan till March 31 but a day after, the National Security Committee (NSC) in its meeting presided over by Prime Minister Imran Khan in Islamabad directed the closure of all educational institutions across the Country till April 5.

So far 28 people in Pakistan have been diagnosed with the Novel Coronavirus, which has already taken 5,436 lives across the globe since.

Mati
Mati-Ullah is the Online Editor For DND. He is the real man to handle the team around the Country and get news from them and provide to you instantly.
Share
Facebook
Twitter
Pinterest
WhatsApp
Previous articleNewspaper Workers’ Organizations back arrest of Mir Shakil-ur-Rehman
Next articleCoronavirus Update: COVID-19 Has Engulfed 149 Countries; 5,547 Deaths