ISLAMABAD, Pakistan: Two most Coronavirus-affected areas of the Federal Capital – Bhara Kahu and Shahzad Town – have been de-sealed after the situation arising out of the virus outbreak in both these areas was substantially improved.

However, two mosques in Bhara Kahu namely Bilal Masjid and Makki Masjid as well as Kot Hathial’s adjourning areas from where the Coronavirus outbreak surfaced first, will remain sealed.

Likewise, Street No. 06 in Shahzad Town, wherein a resident named Faisal Mehmood was tested positive days after he attended the Tableeghi Ijtema in Lahore, will also continue to be locked down. 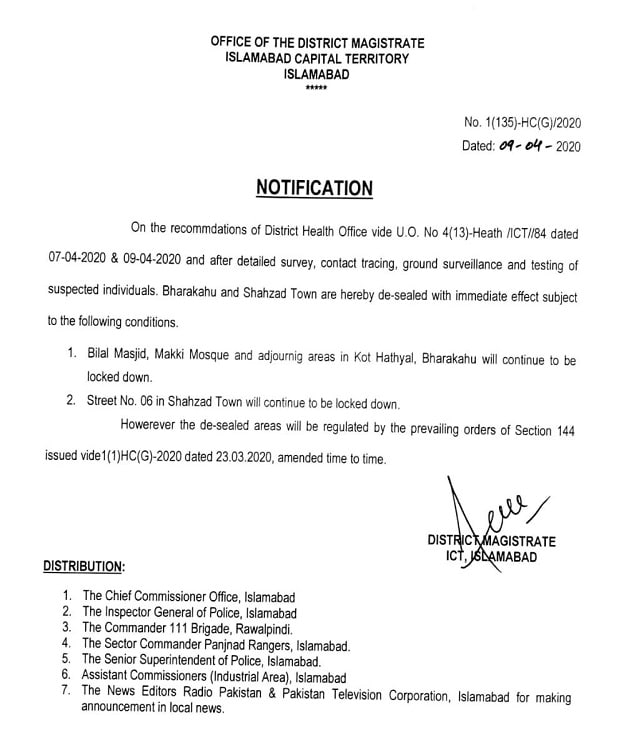 The Islamabad administration had to seal the Street No. 06 in Shahzad Town as a precautionary measure following reports that the funeral prayer of the mother-in-law of Faisal Mehmood was also offered in the area, raising an apprehension that since a number of people congregated to offer the funeral prayer; therefore, the Coronavirus might have been transmitted to others as well.

As per the notification issued by the Islamabad District Magistrate Mohammad Hamza Shafqaat, both Bhara Kahu and Shahzad Town have been de-sealed after a detailed survey, contact tracing, ground surveillance and testing of suspected individuals in the areas.

However, the notification stated that the de-sealed areas will be regulated by the prevailing orders of Section 144 enforced in the Islamabad Capital Territory (ICT) on March 23, 2020.

In Bhara Kahu, a 13-member Tableeghi Jamaat including six Kyrgyz nationals were tested positive for the Coronavirus. Two of them including a Kyrgyz member Abdul Momin were hospitalized while the rest of the members were quarantined in Bilal Majid.

Guests from Kyrgyzstan Tableeghi Jamat who were quarantined at BharaKahu handed over to Kyrgyzstan embassy after testing negative for #COVID2019.

As a gesture of goodwill, Bharakau Police, members of District Administration gave sweets to the tableeghi jamat members. pic.twitter.com/cv8l2T6lre

Last night, six local members returned to their native Okara City while on Thursday morning five foreigners were taken to the Zakaria Tableeghi Markaz in Rawalpindi which had already been declared as a quarantine facility.

How do we plan our response in Islamabad? Bara Kahu, Shahzad Town and H-9 were sealed because of more than 5 positive cases. After massive screening they were desealed. Our next danger area is near Tarlai. All of it is planned here 👇👇Nerve Center of Islamabad Administration pic.twitter.com/LOm11UW3Ry

Mati
Mati-Ullah is the Online Editor For DND. He is the real man to handle the team around the Country and get news from them and provide to you instantly.
Share
Facebook
Twitter
Pinterest
WhatsApp
Previous articleHow Working Moms Can Cope With Corona Virus, Lockdown & Everything In-Between?
Next articleOPDs of all Islamabad hospitals opened