ISLAMABAD, Pakistan: Senator Mushahid Hussain Syed has said that connectivity with countries and regions is key to Pakistan’s foreign policy in the coming decade, with Pakistan having ‘strategic space’ to promote its vital interests.

In his keynote speech on the theme ‘Navigating the New Decade’ at the concluding session of the Islamabad Security Dialogue, he said that Pakistan’s main challenges would be domestic as ‘strategic space’ would give Pakistan a ‘geopolitical breather’, and urged the need to redefine the notion of national security, away from military might alone, to Human Security.

Senator Mushahid Hussain said that Pakistan needs a rules-based national order that should bridge the gap between outmoded State governance versus a vibrant, young, dynamic society, driven by self-starter citizen activism, particularly among youth and women. 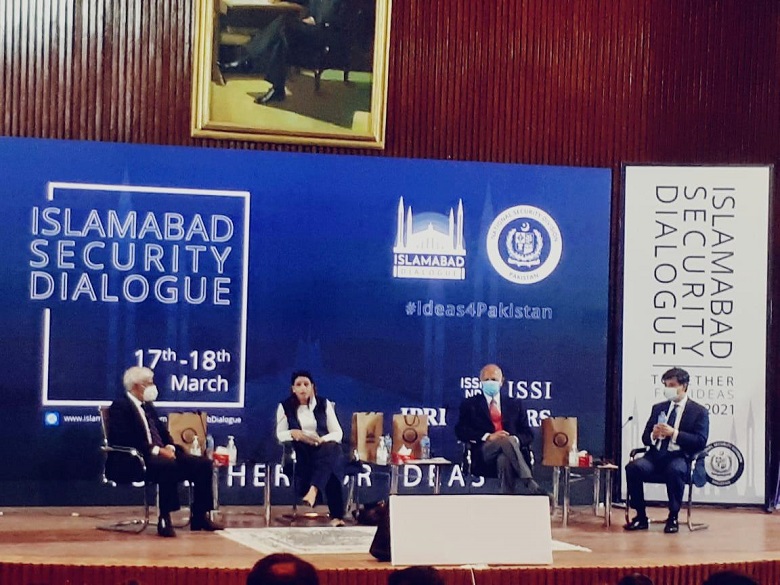 The Senator cited three major transformations which would impact on Pakistan: a shift in the global balance of economic and political power, away from the West to the East in this ‘Asian Century’, Pakistan’s emerging role as a hub of regional connectivity, courtesy CPEC, linking up South Asia with China, Central Asia, Iran and Afghanistan, and India’s transformation into an exclusive, minority-hating ‘Republic of Hindutva’, burying Nehruvian ideals of inclusive secularism.


Senator Mushahid Hussain said that Pakistan’s ‘strategic space’ was due to CPEC, proactive role in Afghanistan peace process, close ties with China and cordial relations with the US at the same time, and India being on the defensive regionally due to the failure of Modi’s ‘ideological foreign policy’, with setbacks during the 2019 Balakot attack on Pakistan and the 2020-2021 border clashes with China, and popular resistance in Occupied Kashmir to Indian illegal annexation.

The Senator termed Pakistan’s mature handling of the post-Pulwama crisis with India through measured retaliation by shooting down two Indian planes and capturing their pilot and returning him as a gesture of goodwill, as Pakistan’s ‘finest hour’ since the deft and courageous handling of the 1998 Nuclear tests, which made Pakistan a nuclear power and ensured a viable deterrent against war and aggression.

Giving his outlook of future challenges, Senator Mushahid Hussain said that the region where Pakistan is located is faced with two contrasting visions. One of the geoeconomics promoted by China’s Belt & Road Initiative (BRI), of which CPEC is the flagship, promotes connectivity and cooperation and only India is on ‘the wrong side of history’ since it opposes such regional economic connectivity. Conversely, there is the geopolitics-driven vision of the US that is inspired by a Cold War mindset seeking containment of China, which a majority of Asia rejects.

Mushahid Hussain said that Pakistan also repudiates any new Cold War scenario, and it will not accept any attempt to impose Indian hegemony in the region, which, in any case, is witnessing major changes, adding that ‘the United States will no longer be the sole superpower in our lifetime’.

The concluding session was also addressed by the former Foreign Minister Hina Rabbani Khar and the former Ambassador to the US Ali Jehangir Siddiqui while Professor Huma Baqai moderated what became an animated question and answer session.