Executive Director of Pakistan-China Institute, Mustafa Hyder Sayed moderated the proceedings of the conference and summarized the proceedings of 1st four sessions which were conducted yesterday. He lauded Chinese support to Pakistan during testing times and talked about emerging prospects of people-to-people connectivity. 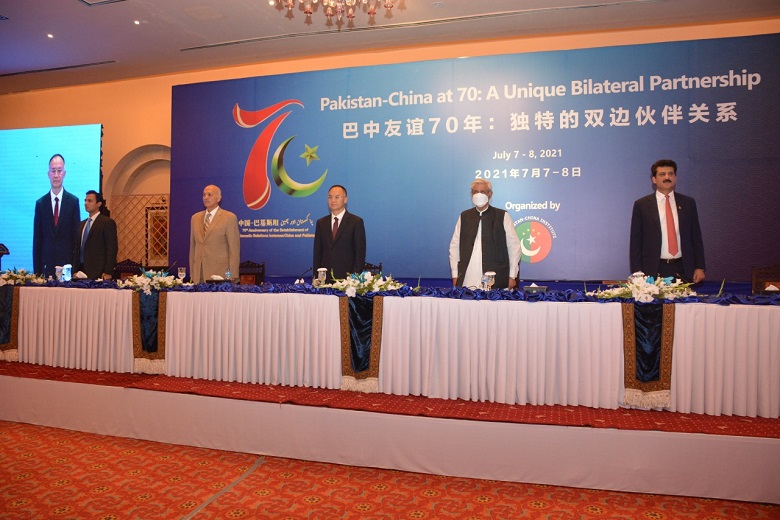 At the start, national anthems of Pakistan and China were played for the audience of more than 250 people. The conference was initiated by a special keynote address via video by Mr. Wang Yi, Chinese State Councilor and Foreign Minister of People’s Republic of China. Wang Yi said that all countries should get together to defeat the pandemic and work against vaccine nationalism. He urged Pakistan and China to promote strategic communication and closer coordination on all issues of common interests. While affirming commitment to Pakistan, Wang Yi said that no matter how the world or the region changes, China will always stand firmly with Pakistan. He also thanked Senator Mushahid Hussain for his role in promoting Pakistan-China friendship.

In his speech, Senator Mushahid Hussain Sayed said, “Today is a historic day because on this day 50 years ago, Dr. Henry Kissinger flew to Beijing from Islamabad on a PIA, thanks to Pakistan being a bridge between China and the US a role we should continue to play’. Talking about the uniqueness of 70 years of bilateral relationship, Senator Mushahid Hussain said that Pakistan-China relations are not transactional, these relations are not tactical nor directed against any third country.

Speaking about the ‘China model’ of development under the Communist Party of China (CPC), Senator Mushahid Hussain attributed China’s phenomenal success to three factors, namely, quality of leadership that is clean, competent and committed, ability to accept mistakes and do a course correction whenever necessary, and peaceful foreign policy, because China has not invaded or occupied any country nor indulged in military adventurism.

Deputy Speaker of National Assembly, Mr. Qasim Suri talked about China’s success in eliminating poverty by pulling 800 million Chinese people out of the poverty line. He highlighted how China has always supported Pakistan’s perspective on the Kashmir Issue, and has always lent steadfast diplomatic support on all international forums.

He expressed satisfaction over China’s help in generating economic activity in Balochistan, rapid development of Gwadar, and creating thousands of job opportunities.

Federal Minister for Agriculture and National Food Security, Syed Fakhar Imam talked about how China has emerged on the international global stage, from under the rule of outsiders. China has grown from a struggling economy that continuously looked at other nations, to one of the biggest economies of the world. Chinese have invested in their human capital which allowed them to achieve 10-13% growth rate for a persistent 25 years. For the third world, there is another partner instead of the US now, and that is China. He added that under the Belt and Road Initiative (BRI), China has brought 140 countries together and is helping them develop rapidly.

Fakhar Imam said that China has always supported Pakistan’s stance on the Kashmir Issue, and was able to call the UN Security Council meeting after August 5, 2019, on the request of Pakistan to urge India to halt atrocities in the valley. Moreover, he said Beijing is creating numerous opportunities for Pakistanis.

He also highlighted how Chinese universities have emerged on the global landscape for their remarkable research and modern academic development.

Ambassador Nong Rong announced that the long-awaited Joint Cooperation Committee (JCC) of CPEC would convene later this month in July.

Moreover, he mentioned how the two countries enjoy strong bilateral relationship in various sectors. He added that the military leaderships of both countries enjoy unique strategic partnership. Ambassador Nong Rong thanked the political leaders of Pakistan for sending congratulatory letters to CPC on its 100 years. He also appreciated the role of PCI as an important bridge to connect our two peoples.

Moreover, he said that CPEC has now moved from infrastructure, energy, and development to agriculture, industry, IT, science and technology. He also mentioned how the two countries especially deepened their cooperation during the pandemic.

He also thanked Pakistan’s military for their strong support for protection of China’s core interests. He lauded the remarkable performance of Pakistan in handling COVID-19.

He labeled urbanization, digitization, and modernization as the pre-requisites for rapid development in the years to come.

The conference also featured an exclusive 10-minute documentary production of the PCI titled “Pakistan-China at 70: A Unique Bilateral Relationship.” This was the concluding session of the conference that started on 7th July 2021 aimed at celebrating 70 years of bilateral relationship of China and Pakistan.

A special 10-minute documentary on Pakistan-China relations prepared by Pakistan-China Institute was also screened which captivated the attention of audience and got words of appreciation from the guests.

This conference was attended by more than 250 people including foreign ambassadors, leading academicians, and government officials from Pakistan and China.