RAWALPINDI, Pakistan: A Condolence Reference was arranged at the Rawalpindi Press Club in the memory of Journalist Adeel Sarwar on Wednesday. 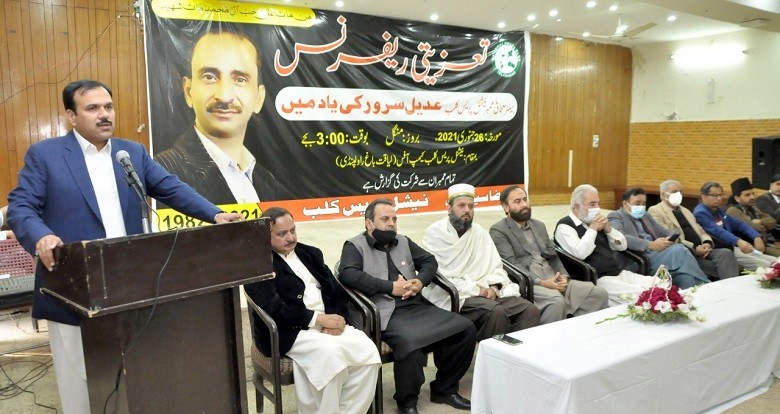 The speakers maintained that Adeel Sarwar was a very dynamic, well-mannered, intelligent and empathetic person who was devoted to worldly affairs as well as to the affection of the Prophet Muhammad (PBUH) and Ahlul Bayt (AS). He always keeps an eye on local, regional and international politics and he will always be remembered for his services for the community.

The Mukhtar Organization presented a memorial shield in the honor of the late journlist to his uncle.

The Voice of America Journalist Ali Furqan read a special essay in the memory of the journalist who was a childhood friend.

In his essay, Ali Furqan informed the participants about the early days of Adeel Sarwar and his professional abilities.

Pir of Mohra Sharif Mujtaba Farooq Gull offered the dua at the conclusion of the reference.

Afterward, prayers for the forgiveness of the journalist Adeel Sarwar and his father were offered.

Adeel Sarwar was badly injured in a traffic accident on Mandra-Chakwal road on October 17, 2020 while traveling to his hometown along with his family. Due to the fatal accident, his father died on the spot while the journalist remained on a death bed for over three months and passed away on January 21, 2021.

Mati
Mati-Ullah is the Online Editor For DND. He is the real man to handle the team around the Country and get news from them and provide to you instantly.
Share
Facebook
Twitter
Pinterest
WhatsApp
Previous articleFakhar Imam stresses efforts to further enhance Pak-Denmark ties
Next articleKupwara massacre: Justice continues to elude victims’ families even after 27 years: Mushaal