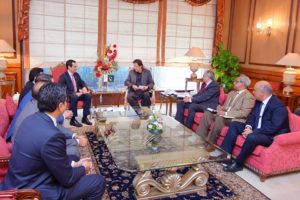 ISLAMABAD, Pakistan: A delegation of Coca Cola from Turkey met Prime Minister Imran Khan in Islamabad on Tuesday, and briefed him about Coca Cola’s existing investment of $500 million in Pakistan.

The delegation also briefed the prime minister about Coca Cola’s future plans of $200 million investment in the coming two or three years that will create new jobs, support ancillary industries and help the government earn incremental revenue through taxes, as the business grows further.

The prime minister assured the Coca Cola Turkey delegation of all possible support of the government in taking advantage of the investment friendly policies of the current dispensation.

Imran Khan said that the government is committed to facilitate the investors in taking advantage of the existing opportunities in the Country by providing level playing field.

Mati
Mati-Ullah is the Online Editor For DND. He is the real man to handle the team around the Country and get news from them and provide to you instantly.
Share
Facebook
Twitter
Pinterest
WhatsApp
Previous articleYasir Shah with 14 wickets helps Pakistan win 2nd Test against New Zealand
Next articleHere’s how Lifetime Learning @LUMS is Transforming Lives