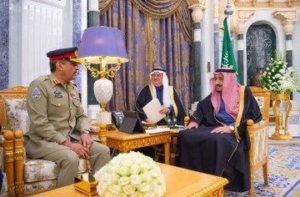 In a statement, the ISPR said that during the meeting, matters of mutual interest were discussed.

General Nadeem Raza is currently on an official visit to Saudi Arabia.

As per the official Saudi News Agency SPA, during the meeting the Saudi King and the CJCSC reviewed close relations between Pakistan and Saudi Arabia and ways to enhance bilateral cooperation, especially in military fields.

Pakistan’s Ambassador of Pakistan to the Kingdom of Saudi Arabia Raja Ali Ejaz was also present in the meeting.

Mati
Mati-Ullah is the Online Editor For DND. He is the real man to handle the team around the Country and get news from them and provide to you instantly.
Share
Facebook
Twitter
Pinterest
WhatsApp
Previous articleDaraz.pk becomes official e-commerce partner of Toyota Pakistan
Next articleTop 6 Sugar Mills of Pakistan that will have a thriving Business in 2020