KARACHI, Pakistan: Several human rights activists and organizations staged a protest demonstrated in front of the Karachi Press Club and demanded the government to provide protection to the lives and properties of the religious minorities of Pakistan.

They also urged the police to arrest and prosecute the assailants who opened fire at a vehicle leaving Pastor William Siraj dead and Pastor Patrick Naeem wounded. 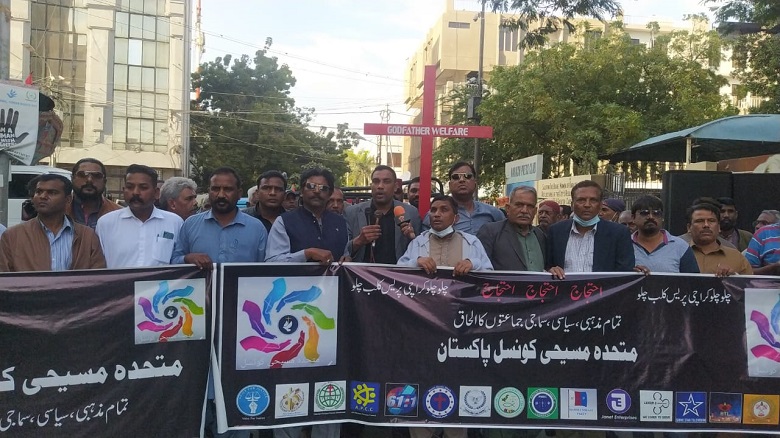 Speaking on the occasion, the Chairman of Muttahida Masihi Council Noel Ijaz said that the feeling of insecurity within the Christian community increases when these kinds of incidents take place.

We would feel better protected if the police succeed in arresting the attackers and if perpetrators are convicted for their crimes. It is a sad reality that attackers involved in the persecution of minorities usually enjoy impunity, he observed.

Alyas Samuel said that whenever the minorities are attacked, the police and government do not show enough will, which leaves an impression that minorities are ssecond-classcitizens, and are not treated equally.

Asif Bastian said that the people unfortunately are very much aware of this general attitude of the government and police that emboldens the terrorists and extremists to oppress and attack minorities particularly Christians. Religious minorities are beaten down time and again, and we find no protection. If we fight back, the police put us in jail but the elements behind mob attacks against minority settlements get away with their crimes.

The Chairman of Voice for Justice Joseph Jansen said that the comparison needs to be drawn between the treatment by the government authorities as witnessed in the incident of the killing of two Muslims in 2015 in retaliation of the Youhanabad church attacks where the police took immediate action and arrested 200 Christians and laid down charges against 47 Christians. Those 41 Christians spend 5 years in prison until they were finally acquitted.